Fatal Dog Attack Statistics
DogsBite.org recorded 39 fatal dog attacks in 2017. Pit bulls contributed to 74% (29) of these deaths, the highest death count on record for pit bulls and seven times more than the next closest breed. German shepherds followed, inflicting 4 deaths. 13 different dog breeds contributed to lethal attacks in 2017. The last time the CDC collected "breed" data about dogs involved in fatal human attacks was 1998. Since this time, pit bulls have mauled to death over 340 Americans.

DogsBite.org - 2017 saw a surge of dog bite fatalities at the end of the year with 8 fatal dog attacks, including the high profile case of a 22-year old woman, whose remains were discovered on December 14 after she was killed and eaten by her own two pit bulls. Other late-year cases include two women in Alabama who were killed by "packs" of pet pit bulls one week apart and a woman in Arizona who was fatally mauled by a rescue akita she was hoping to rehome.

Due to two events in 2017, the public became more aware of the risk unregulated rescues and their "transport" operations pose, which routinely "pull" dogs with behavior problems from death row and truck them across state-lines to be rehomed. The grave facial mauling of a child in Iowa by a pit bull-mix shortly after adoption and a lethal attack in Virginia, carried out by a pit bull adopted seven hours earlier, set the stage for debate, civil lawsuits and new state legislation.

Over the course of 2017, our nonprofit sent out 8 FOIAs to uncover more information about suspected fatal dog maulings. We uncovered 2 new deaths in 2017, one in Adams County, Illinois, the other in Palm Beach County, Florida. Two deaths by sepsis due to untreated severe dog bite injuries were also discovered, the 2013 death of a 61-year old Palm Beach County, Florida man and the 2016 death of Lisa Breckenridge in Bexar County, Texas. Both attacks involved pit bulls.

Currently, death by sepsis cases due to untreated severe dog bite injuries are excluded from our data set, but we still retain the case information. In 2017, 10 dog attack-related deaths were also excluded. Two of those deaths involved aggressive non-bite injuries (struck by dog death).1 Qualifying struck by dog deaths may be added to our fatality data set at a future time, since the CDC already combines "bitten or struck by dog" deaths under the same ICD-10 mortality code.

Rottweilers, the second most lethal breed since 2005, inflicted one death in 2017, a predatory attack on a child. A chart breaking down the 13-year data set into two periods (6- and 7-years respectively), shows that deaths inflicted by rottweilers have decreased from 14% to 7% and deaths inflicted by pit bulls have increased from 58% to 71%. The charts indicate that soon only two categories may be relevant in fatal dog attack statistics: pit bulls vs. all other dog breeds. 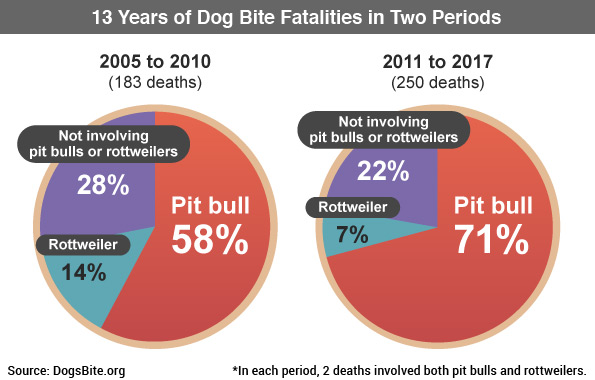 In 2005, when the City and County of Denver defended its pit bull ban, Dr. Peter L. Borchelt, PhD, an expert witness for the City, testified about the effect of increasing the number of pit bulls involved in an attack upon a human in terms of the likelihood of serious injuries or death. Rather than a simple multiplying effect (i.e., the mathematical pattern of x, x + x = 2x, 2x + x = 3x), Dr. Borchelt testified the effect would be closer to an exponential effect (i.e., 1 = x1, 2 = x2, 3 = x3).

When asked in court by the Denver Assistant City Attorney how the level of dangerousness and potential damage changes when multiple pit bulls attack a human, versus one pit bull, Dr. Borchelt testified, "by an order of magnitude," meaning extremely worse. Furthermore, when asked by the City, "Is it your opinion that an attack upon a human by multiple pit bulls, in fact, is exponentially more dangerous than an attack by multiple dogs of other breeds?" Dr. Borchelt answered, "Yes."2

We examined this effect by reviewing fatal attack cases involving 3 or more dogs and the number of pit bulls that factored into each death.

In 2017, 15% (6) of all fatal dog attacks involved rescued or rehomed dogs. Rescued pit bulls were involved in 83% (5) of these attacks and 80% (4) of these pit bulls had been vetted by an animal agency or foster prior to adoption. 67% (4) of all deaths involving rescued or rehomed dogs had known aggression or behavioral issues at the time of the fatal attack. In half of all death scenarios, the rescue dog was added to a home that already had one or more dogs (multi-dog household).3

In 2017, 21% (8) of all dog bite fatalities resulted in meaningful criminal charges, equal to the 12-year average. 38% (3) of all criminal charges were brought in the state of Georgia last year, including "next-day" second-degree murder charges against a grandmother after two family pit bulls under her care killed her grandson. The other two dog bite fatalities in Georgia resulted in involuntary manslaughter and reckless conduct charges. All three cases involved pit bulls.4

Three states responded with legislation after a fatal pit bull attack in 2017. Legislators in Alabama introduced "Emily's Law," named after Emily Colvin who was killed by her neighbor's five pit bulls. In Virginia, after a newly adopted pit bull killed a woman, legislators put forth a bill requiring releasing agencies to disclose the bite history of all animals to adopters. In Ohio, a renewed attempt is underway to pass the Klonda Richey Act after a pit bull killed a Dayton man in 2017.

13 years of fatal dog bite statistical data is sufficient to evaluate the "breed-specific" issue. Pit bulls dramatically dominate attacks causing death. With the addition of rottweilers, these two breeds accounted for 76% of all deaths. This year we removed the other breeds involved in fatal attacks from our 13-year fatality pie chart and renamed it, "not involving pit bulls or rottweilers." This shows how disproportionately the top killing breeds kill and how infrequently 35 other breeds do.

Despite this glaring disproportionate fact, which the CDC first identified in 2000, powerful animal lobbying groups continue to push state-level preemption bills that prohibit local governments from adopting and enforcing breed-specific laws. Importantly, over the last three years (2015 to 2017), legislatures in 10 different states have rejected these preemption bills -- 90% failed to pass. Currently, six states face this type of legislation in 2018, including: Michigan and Missouri.

Our call to action this year is to use our statistics and charts in correspondence with local and state officials. Use nonfatal severe injury statistics as well. Our 2016 special report summarizes key peer-reviewed medical studies (2009 to 2016). Since 2011, the majority of these studies report similar findings: pit bulls are producing a higher prevalence of injuries and a higher severity of injuries, requiring 3 to 5 times the rate of surgical intervention compared to all other dog breeds. 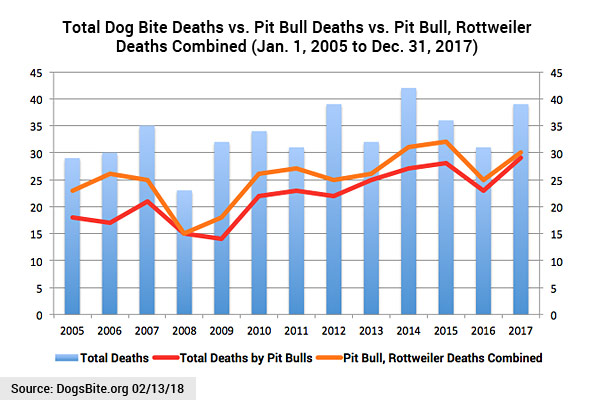 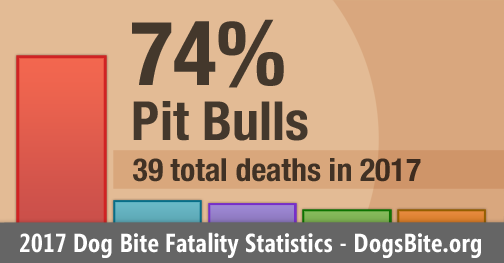 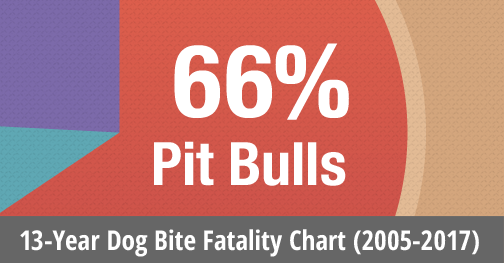 1Aggressive struck by dog deaths during 2017: Shirley Wright, 89-years old of Toledo, Ohio and Dr. William Deneke, 70-years old of Pine Bluff, Arkansas.
2Transcript: City and County of Denver, et al, v. The State of Colorado, et al, District Court of City and County of Denver, Colorado, Case No. 04CV3756, April 7, 2005.
3In one case, the couple had 5 dogs in their home already and had been under investigation by CPS prior to adopting a pit bull from the El Paso Animal Services Shelter. Five months later, this pit bull joined the other neglected family dogs in a fatal pack attack that brutally killed a child. That is the "no kill equation" at work.
4Updated April 10, 2018 to add two cases with criminal charges that were filed after the publication of this post on February 28. Both cases are from Alabama and involve the deaths of Emily Colvin and Tracy Cornelius.