Police Charge Boy's Parents with Felony Injury to a Child 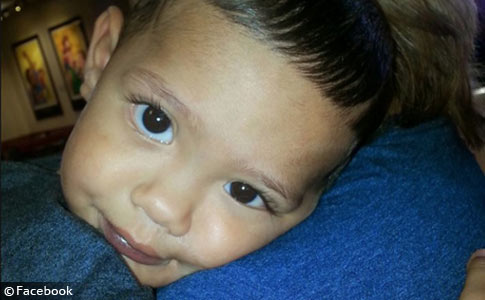 Jacob Brooks, 4-years old, was killed by a pack of family dogs in his backyard.

Parents Charged
UPDATE 09/30/17: The parents of a little boy mauled to death by dogs have been arrested. On July 27, 4-year old Jacob Brooks was killed by a pack of family dogs running loose in a backyard after his mother left him unattended in an enclosed trampoline. By the time first responders arrived, Jacob was already dead. A neighbor who witnessed part of the attack said the dogs "practically ate him." The dogs were known in the neighborhood for being loose and aggressive.

There were four dogs involved in the attack. One was a pit bull-mix adopted to Jacob's family in February by El Paso Animal Services.1

After an investigation by Crimes Against Persons, Brittany Brooks, 27, and Ashley Brooks, 29 were arrested at a relative's home Friday night. Both were charged with felony injury to a child and booked into the El Paso County Jail under a $75,000 bond.2 At the time of the attack, Jacob lived with his two siblings in the household. His siblings were later placed with relatives. Child Protection Services had investigated the couple in the past, but the outcome of that inquiry is not known.

Detectives also spoke with relatives who allegedly said the boy was "terrified" of the family pets. The criminal complaint states relatives allegedly witnessed Brooks "use the fear as discipline" by threatening to leave the boy along with the dogs if he misbehaved.

"The (investigator) believes the historical abuse of the animals, the (victim's) fear of these animals, the (mother's) lack or delay in checking up on him and the decision to allow the (victim) to remain by himself in the backyard with the animals were contributing factors in the death of the (victim)," the criminal complaint states. - KVIA, October 5, 2017

07/31/17: Multiple Dogs Euthanized
Animal control officials said three German shepherd-mixes and one pit bull were euthanized the same day they killed a 4-year old boy. On Thursday, Jacob Brooks' mother left him alone in an enclosed trampoline in the backyard, where four family dogs roamed. A teenager heard the boy's mother panic, saying her son had gotten away. The teenager jumped into her backyard to check there first and was confronted by the dogs and the boy's brutal mauling. Jacob was already dead.

Neighbors said the family had up to 10 dogs -- German shepherds and pit bulls -- of varying sizes. Officials seized six dogs from the home; two smaller dogs were inside during the attack. Neighbors said the outdoor dogs were aggressive and had escaped the family's property before. Back in April, his mother (or her partner) posted to a public Facebook group that she had just found a male pit bull. Hours later, she admits the pit bull escaped her property -- she lost an already lost dog.

(Initial post) "Found this male pit bull... he's very friendly and loves my kids, he trained so I know his owner is missing him."

(Later in the comment thread) "I'm sad to say that he got away from us today while we were out... he got out of our fence, I went out looking for him and did not find him ... I'm sorry everyone I really wanted to find his home." 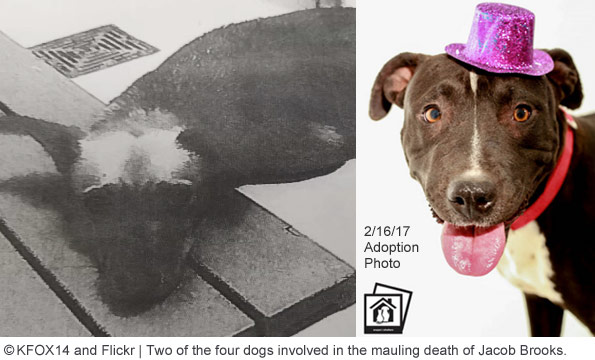 07/28/17: Neighbor Recounts Scene
Neighbors told the El Paso Times the scene of the fatal mauling was chaotic. "The ambulance came, and when we saw the people who live there come out of the house crying, I imagined right away (what might have happened)," Ramon Payan said, who lives across the street from the boy's home. "They have a lot of dogs, and aggressive dogs -- pit bulls and German shepherds, big and small, about 10 dogs --- and young children," Payan said. The dogs "practically ate him," he said.

Payan said he believes two women and three children live at the home, including a baby. Payan described the women as screaming and throwing themselves on ground, but the boy was already dead. "Even when they were taken in the police car, they were still screaming and screaming," Payan said. It sounds like these women were "collecting" dogs and some were younger offspring. A pack of unsterilized aggressive dogs alone with a 4-year old, what could possibly go wrong?

While these women are extremely traumatized, it certainly is a case worth prosecuting against the child's mother. At least one neighbor had warned her about the pack's aggression and how they often escaped her backyard. The dogs were a known problem in both areas -- being loose and aggressive. Then she abandoned her 4-year old son, Jacob Brooks, in an "enclosed trampoline" in the backyard where the aggressive pack roamed. That is neglect in Texas, just to get started.

(a) placing a child in or failing to remove a child from a situation that a reasonable person would realize requires judgment or actions beyond the child's level of maturity, physical condition, or mental abilities and that results in bodily injury or a substantial risk of immediate harm to the child;

07/28/17: Pack of Family Dogs Kill Boy
El Paso, TX - A little boy was mauled to death by a pack of dogs Thursday evening. El Paso police identified the child as Jacob Brooks. "The child had been left by his mother in an enclosed trampoline in the backyard where there were four dogs," police stated in a news release. The deadly attack happened in the 9100 block of Morelia. The boy was discovered dead at the scene. Investigators said the four dogs belong to the homeowner and the child lived at the residence.

"Everything went by so fast. I'm still shaking and I haven't been able to sleep at all because it's shocking." - Sebastian Hernandez

15-year old Sebastian Hernandez, a neighbor, witnessed the attack through his kitchen window. Sebastian said his 13-year old brother, Albert, managed to pry one of the dogs off the boy, but then had to defend himself against the dogs. "Those dogs were really crazy, they were always biting on each other," he said. Sebastian's grandmother said she knew the family. She had warned the family in the past about the dogs' aggression and how they often escaped their backyard.

Animal control seized all four dogs -- the breeds were not identified. The El Paso Times captured a photograph of the "enclosed trampoline" in the backyard of the home where the dogs were kept. According to a report by KFox14, it seems the boy was able to get out of the enclosure. Albert was playing basketball nearby when he heard a woman crying and saying her son had gotten away. He decided to check the backyard first, which is when he encountered the dogs and found her son.

"The child's mother was placed into protective custody and turned over to medical professionals at a medical facility," - El Paso Police Department

NBC4i confirmed they were all family dogs. A neighbor who did not want to be identified said this is traumatic for the whole neighborhood. We see the children playing outside everyday, he said. "How are you going to come back and [now you] won't be seeing the little boy ever again?" The soft-spoken man is especially concerned for the teenager who tried the save the child from the dogs. "I think it’s going to be real hard for him," the man said, "I think he saw his [the boy’s] face."

(Multiple fatal and nonfatal dog attacks have involved a child playing on a trampoline beforehand. The last similar fatality is also from Texas, the brutal mauling death of 5-year old Tanner Smith.) 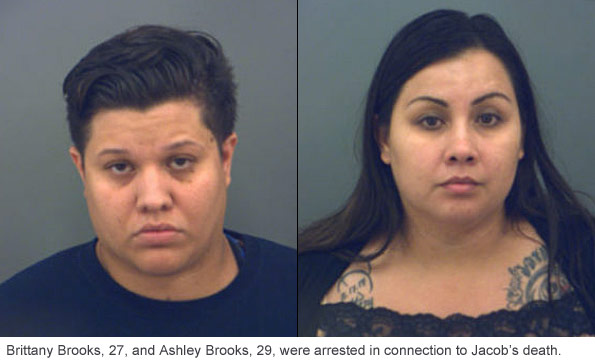 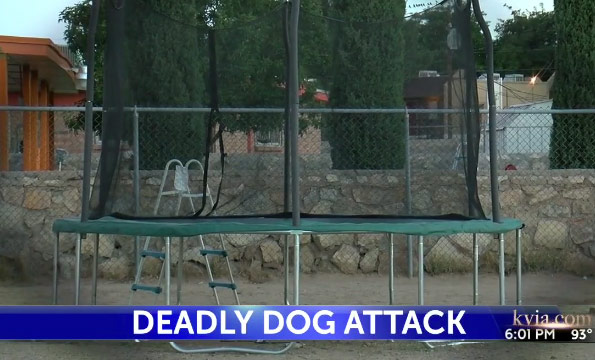 1It's unknown where the three German shepherd-mixes came from. However, these two women were dog "collectors," so the sources are unlimited. At the time of the attack, they had six dogs in their household.
2There are conflicting reports of bail with media outlets reporting $75,000 and also $7,500.