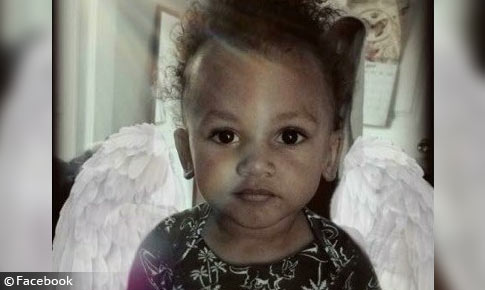 10 Years Probation
UPDATE 04/09/18: There will be no trial after two family pit bulls killed 20-month old Paris Adams on August 1, 2017. The day after his death, his grandmother Sandra Adams, 70, was charged with second-degree murder, involuntary manslaughter, and second-degree cruelty to children. The Atlanta Journal-Constitution reports that Adams pleaded guilty in Hart County Superior Court to involuntary manslaughter in a plea deal last month. Adams was sentenced to 10 years probation.

Prior to her grandson's death, Adams had been cited multiple times about these same two pit bulls. There were at least six ordinance violations from 2013 to 2015, including the dogs being tangled in their tether, running at large and being aggressive. Earlier news reports misstated her sentence as "10 years in prison." There will be no prison time for Adams, unless she violates her probation conditions, which we hope includes a prohibition of owning or harboring any dogs.

Basically, we got an advance shot of the holding facility, which was unlabled, the night before this raw footage was posted to Facebook.1

Additional information gleaned from the raw footage is an interview with Hartwell Police Chief Anthony Davis. He explained that the mother of the child, Amy Adams, goes back and forth in her living situation. She sometimes lives with her sister and her mother. Said another way, baby Paris went back and forth living with his aunt and grandmother. Both households have multiple pit bulls and multiple white pit bulls too (See: aunt's dogs). Authorities are still piecing this part together.

Notably, there is a curious post by Amy on October 13, 2014, seven days after "Whiteboy," one of the fatal attackers, was issued its first citation for being at large (See: page 7). "I just found out that i CAME CLOSE to not being able to breed him anymore! But moms slick when she needs to be- shhhh- its a secret!! (sic)," Amy wrote. The "Goin for a ride," post suggests she may have whisked the dog away from her grandmother's home at that time to prevent a municipal neutering threat.

This "public" Facebook post Amy hopes is a "secret" also suggests her criminally charged mother lied in some way about Whiteboy back then.

Another post that coincides with a citation was by Laura, Amy's sister. On the morning of October 16, 2014, the grandmother was issued a citation after a brown pit bull menaced two joggers. On the same day, Laura tries to give away this pit bull (Babygirl) for free, stating, "My mom just cannot keep her anymore." Laura also clears up any questions on whether this dog is a mix. "She is full blooded," Laura writes. "She is jeep rascal and gator gotti. No mixing in that bloodline at all (sic)."

Finally, the Georgia Bureau of Investigation (GBI) leads this investigation and filed the charges. The question remains whether the child's mother will also be charged. If she is charged, it will be GBI that makes this determination, along with the district attorney's office. The other unknown factor is how much skipping a 9-1-1 call -- and stopping to pick up Paris' mother before taking him to Urgent Care -- plays into the charges against his grandmother. He arrived dead at the facility.

08/02/17: DA Press Conference
District Attorney Parks White gave a press conference today providing new details. On Tuesday afternoon, 20-month old Paris Adams was mauled to death by two family pit bulls while under his grandmother's care. Sandra Adams, 70-years old, was subsequently charged with multiple felonies. After the death investigation is complete, a grand jury will determine if Adams is indicted. White could not provide any details about the autopsy results or the "family relationships."

Adams has been cited multiple times in the past about these same two pit bulls. There were at least six ordinance violations from 2013 to 2015. The previous citations involve the dogs being tangled in their tether (typical shoddy pit bull ownership), running at large (typical shoddy pit bull ownership) and running at large being aggressive -- typical pit bull behavior. The citations indicate the child's mother was the actual owner of the pit bulls; the two may have been living together.2

"In March 2015, officers were called to Adams home after a woman said she was walking her dogs and they were attacked by a white pit bull at large. Officers said Adams told them she was walking her daughter's two dogs when their leashes became crossed and she dropped one of them." - Fox Carolina, August 2, 2017

As we have seen in the past, this may be another case of an adult "dumping" her pit bulls on a parent who is 70-years old. No citations have been issued to Adams since 2015. This may be due to an apparent kennel system that was built (seen in the recent WYFF footage). At the time of the attack, the pit bulls were inside the home. Adams and baby Paris were outside. When Adams attempted to re-enter her home, the dogs bolted out, knocking her down, and savaged the baby.

The family owns multiple white pit bulls. Pictured below is Blueboy with baby Paris in August 2016. Blueboy is the offspring of Whiteboy (also a white pit bull). Amy Adams, baby Paris' mother, writes in the post, "Blueboy kissing Paris. If only Blueboy's parents (Whiteboy and Babygirl) were like him!!!" This indicates both of the dog's parents have aggression issues and are likely the two dogs involved in the baby's mauling death. The pair are also siblings; the family bred them together. 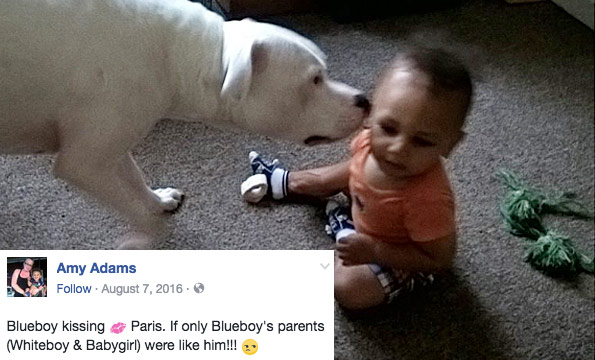 Fox Carolina just posted footage of both pit bulls while under quarantine: Whiteboy and Babygirl. Fox Carolina also posted the previous incident reports -- we are just now going through them.

08/02/17: Criminal Charges Filed
Overnight, a number of new developments occurred. Authorities charged the child's grandmother with a range of offenses in connection to his mauling death. Sandra Bowers Adams, 70-years-old, was charged with second-degree murder, second-degree cruelty to children and involuntary manslaughter. A news release from the Georgia Bureau of Investigation states Adams had been cited on multiple occasions by the Hartwell Police Department for maintaining disorderly animals.

"Staff at the Urgent Care had requested assistance from EMS and Law Enforcement after Sandra Adams and Amy Adams entered the office with Amy Adams’ twenty-month-old son. The child had suffered extensive injuries following an apparent dog attack. Medical personnel and EMS determined the child was unresponsive and the child was pronounced dead at 3:36 pm ...

Historical information indicates that Sandra Adams had been cited on multiple occasions by the Hartwell Police Department under a city ordinance maintaining disorderly animals." - Georgia Bureau of Investigation

Last last night, we did uncover the "cast of characters" in the brutal pit bull mauling death of this little boy. The child's mother and her sister have about seven or so pit bulls between them. Both sisters are pit bull owners, backyard breeders and know their "bloodlines" too. It seems the grandmother also owned her own set of pit bulls and likely more than two. "Boilerplate" pit bull advocacy runs heavily in the family. The below two memes are from the mother's Facebook page. 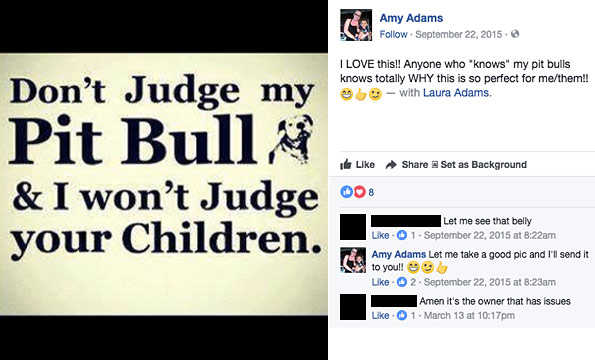 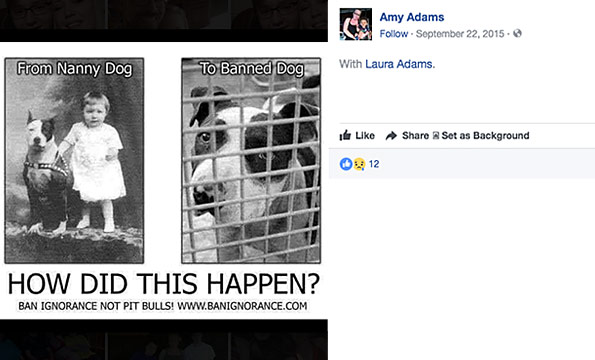 The young child lived inside the home with the dogs, Sheriff Cleveland said. Earlier reports stated one of the family pit bulls was a "white pit bull." The Hartwell Police Department, the Hart County Coroner's Office and the Georgia Bureau of Investigation (GBI) are investigating the boy's death. The child's body has been sent to the GBI crime lab for an autopsy. The dogs will be observed for the next 24 to 48 hours before they are put down, according to the GBI, Sheriff Cleveland said. 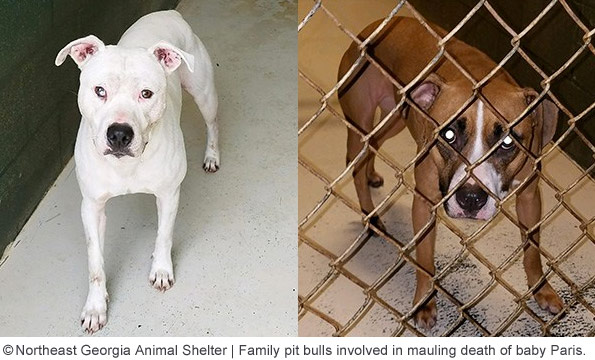 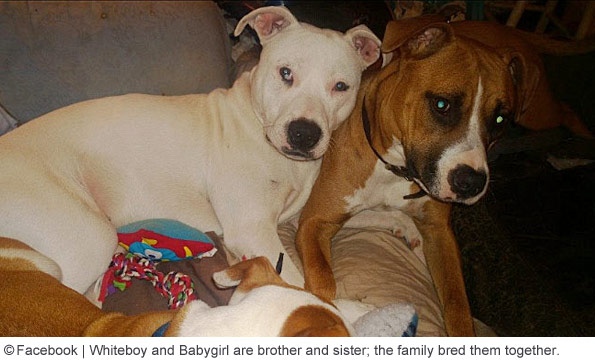 1It's also the oldest trick in the book to claim someone else owns the dogs when being given a citation. The grandmother does this several times. First she blames an unknown man, then claims her daughter owns the dogs. This is not only to deny responsibility it is to deliberately confuse law enforcement. As noted in the reports, the officer had not checked to see if there were more citations about these same dogs under the daughter's name.
2If there was any delay in getting this severely injured child to the emergency center -- apparently the family did not call 9-1-1 -- that could result in these types of criminal charges. The grandmother's home is only 1.5 miles away from the Reddy Urgent Care center in Hartwell, but she also stopped to pick up the boy's mother beforehand.