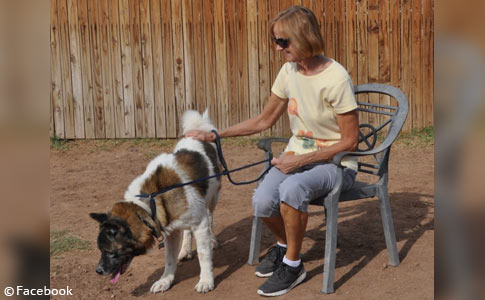 Carol Harris, 69-years old, was killed by this akita she was trying to rehab for adoption.

Clarifying Rumors
UPDATE 12/23/17: The rescue organization that Carol Harris worked with, Akita Advocates Relocation Team Arizona (AARTA), published a post clarifying Carol's role in the group. "Carol Harris was not simply a volunteer at AARTA as news media has portrayed. She was an officer and the backbone of the rescue as well as the current President of the local breed club." On December 20, Harris was killed by a rescue akita, named Izanaghi, while trying to rehab the dog for adoption.

AART claims Izanaghi was not surrendered as an aggressive dog, but that he "deteriorated in the kennel environment after living his first six years in a home." Normal dog breeds have forever deteriorated in this same environment, but do not attack and kill their handler. "Carol handled him countless times without incident" and "Izanaghi turned on Carol and no one will ever know why," states AART. Thus, the reality of "zero mistake" breeds; people pay with their lives and limbs.

12/21/17: Dog Mauling Victim Identified
A woman mauled to death while trying to "rehab an orphaned akita" has been identified as 69-year old Carol Harris. The 6-year old male dog is set to be euthanized Thursday then tested for rabies. On a Facebook post published by Akita Advocates Relocation Team Arizona (AARTA), Carol is described as a "big part of AARTA," as well as, a "champion for this noble breed" and a "true advocate for akitas." Grace Costa states, "So traumatic for everyone involved and for the breed."

AARTA states in the post, "With great sadness, we share the loss of our beloved Carol Harris. She passed away today while helping rehab an orphaned akita in the hopes of him becoming adoptable. She is missed by her husband, Ken, and all of us at AARTA. Please say a prayer for Carol’s family. Out of respect for Carol and her family please understand that we cannot answer questions at this time." Possibly they are referring to questions related to the dog's aggression.

AARTA has in the past adopted out akitas with a bite history, along with other dangerous characteristics, such as animal aggression, the latter being common in the breed. "Kovu is only 11 months old and a goofy, playful boy, but it's hard to capture that in still photos!" states AARTA. "He's looking for an adults only home where he doesn't have to interact with other animals. He has a bite history and needs alpha adults to train and guide him at this tender age," states AARTA.

Akita -- a fighting and hunting dog -- "is a large, powerful, fearless, game breed that can become a very useful man-stopping dog" - Carl Semencic

AZfamily.com spoke to her heartbroken husband. "She was a very giving, understanding, intelligent woman," Kenneth Harris said. "I’m going to miss everything." Harris said the couple has four foster akitas and two of their own; he lives in a six akita household. Harris plans to keep all of the dogs and does not want anyone to "blame the breed" for his wife's death. "They’re not aggressive. Just like pit bulls, people think that they’re all aggressive. They’re not," he said.

Such a black and white scenario is hardly the case. Pit bulls are inherently dangerous due to their selection for baiting, fighting and killing. Akitas are a fighting breed as well, and some akita rescue groups are honest about the breed's animal aggression and guarding behavior. No one has ever said that "all" pit bulls and akitas will show these traits, but when they do, the results are often disastrous. The question is how to protect children and the public from this disaster scenario.

Harris said his wife had volunteered with Akita Advocates for 12 years. She retired from her job at a bank three years ago then started her rescue work full-time. Harris said his wife did not know very much about the dog's history. This is why rescuing inherently dangerous breeds is often so hazardous. They already come with the heritage of fighting, baiting and/or guarding, protection. They already come with being unwanted by their previous owner too, thus the "orphaned akita."

12/20/17: Volunteer Killed by Rescue Dog
Phoenix, AZ - A woman is dead after being brutally attacked by a dog she was trying to socialize so that it could be rehomed. The attack occurred at Canine Country Club and Feline Inn on East Washington Street about 2:45 pm. The 69-year old woman suffered significant bite injuries, Phoenix police said. The woman volunteered at a rescue group called Akita Advocates, said Jose Santiago of Maricopa County Animal Care and Control, who also responded to the scene.

"She was here potentially to socialize the animal to prepare it for adoption when the attack took place." - Jose Santiago, Animal Care and Control

An employee at the facility noticed the dog running free, covered in blood. The employee then discovered the woman severely injured in a dog exercise area, Santiago said. Workers were able to secure the dog and call 911. The victim was transported to a hospital with critical injuries, where she died. The dog is technically owned by Akita Advocates, he said. The group told county officials it intends to take possession of the dog Thursday and then put the animal down, Santiago said.

Santiago confirmed the dog involved in the attack is a male akita. Canine Country Club and Feline Inn is a large facility that works with rescue groups by providing housing at a greatly reduced cost for animals that are being prepared for adoption. Even Maricopa County Animal Care and Control (MCACC) uses the facility at times to house animals, Santiago explained. According to their website, Akita Advocates started in late 2004 and has rehomed over 200 displaced akitas.

There are over 85 million dogs in this country. Imagine if every one in 200 of them killed a person? Rescuing aggressive dog breeds is dangerous.

The Japanese akita (or "akita") falls within a group of fighting breeds and is targeted under breed-specific legislation in various jurisdictions including entire countries, such as Spain. Akitas often appear on the "Most Dangerous Dog Breed" lists that circulate the news media. The last fatal dog attack involving an akita occurred in South Carolina in 2011 after 9-year old Kristen Dutton suffered fatal neck injuries by an akita her grandfather had purchased just three weeks earlier.

ABC 15 interviewed the owner of Canine Country Club, Greg Donahue, who said the victim was a volunteer and had been coming into the facility a few times a week for the past several years. "Unbelievable," Donahue said. "It's so tragic; a lot of tears today. A lot of upset people who have never seen anything like this, ever," he said. "We've never had more than a nip. This is unbelievable," he said. The dog is currently being held in a secure holding facility at MCACC.

Journalist: Can you tell us what you saw?
Donahue: Nobody saw what happened. We only saw the result of what happened. One of the rescue volunteers was walking her dog, to the best of our knowledge. And, it looks like the dog turned on her.
Journalist: How difficult has this been for you?
Donahue: Unbelievable. It's so tragic; a lot of tears today. A lot of upset people who have never seen anything like this, ever. We've never had more than a nip. This is unbelievable -- just unbelievable.
Journalist: What can you tell us about this volunteer?
Donahue: She volunteers regularly. Multiple times a week. Has been doing it for years. We've never experienced any issues. We've never seen her have any problems with her dogs.
Journalist: What about the dog? Has the dog been here a long time?
Donahue: I'm not sure how long that particular dog has been here.
Journalist: What is the relationship between Canine Country Club and Akita Advocates?
Donahue: We are a boarding facility. We provide boarding for a number of rescue groups at reduced rates to help them adopt out dogs. We have a very large facility. When they are trying to find homes for their dogs. We given them a greatly reduced price so that they can do that. So that they can make their dollars go as far as they can. 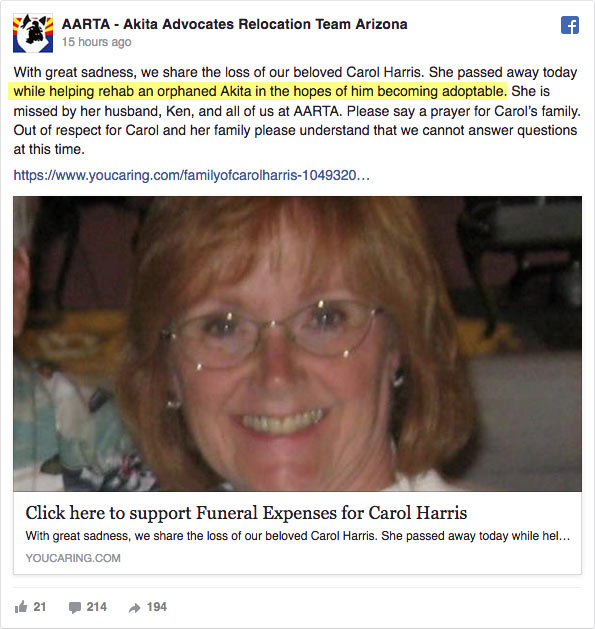 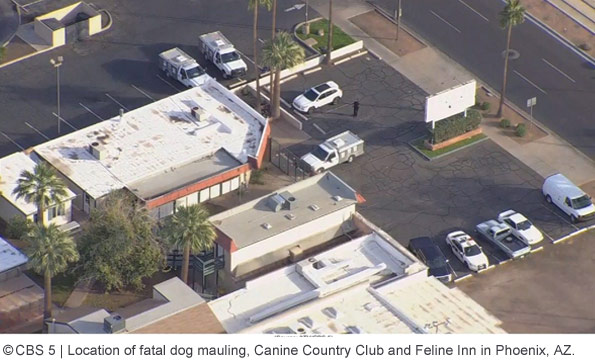 Baseline reporting requirements:
Law enforcement departments across the United States should release consistent "baseline" information to the media and the public after each fatal dog mauling, including these items.
Tweet
Share278
Tweet
Share278
Donate Now