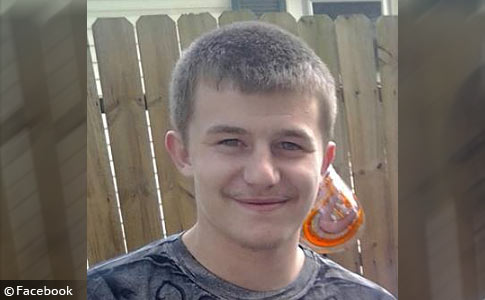 Jamie Owsley, 21, died in February after being bitten in the neck by a family pit bull.

Roommate Sentenced
UPDATE 05/14/18: On February 26, 2017, a 21-year old man died after being bitten in the neck by a family pit bull. The pit bull belonged to his roommate and cousin Kerry Talburt II. The two resided at 1005 1/2 Jersey Street. The male pit bull that inflicted the attack, Hercules, had bitten three people before delivering a bite that killed Jamie Owsley. Hercules was euthanized on March 7. Talburt, however, owned at least two other pit bulls and his legal troubles were only just beginning.

On July 8, Talburt was arrested after allowing one of his pit bulls to attack a man. "Police said Talburt had gotten into an altercation with his downstairs neighbor, and Talburt's dog got loose and bit the man," reports the Herald-Whig. Talburt was also accused of pushing his thumb in one of the man's eyes. At that time, Talburt was charged with six felonies: home invasion, aggravated battery, reckless conduct, criminal trespass of a residence and two counts of obstructing justice.

Substantial drug-related charges were later added to the mix when Talburt was arrested again on November 20 and December 31, 2017.

On Monday, Talburt was sentenced to 15 years in the Illinois Department of Corrections as part of a negotiated plea deal. Kerry D. Talburt II, 22, pleaded guilty to charges of aggravated battery, unlawful possession with intent to deliver cannabis between 30 and 500 grams and a variety of other drug trafficking charges in Adams County Circuit Court. The judge assigned three years to the 2017 aggravated battery charge. Talburt was also ordered to pay $13,476 in restitution.

In February 2017, one of Kerry Talburt's pit bull killed his cousin. In July, another pit bull owned by Talburt attacked a man in the face during an altercation. That "altercation" ended in six felony charges, including a home invasion charge, which was later dropped. On New Year's Eve, Talburt was busted on a slew of drug charges. That bust landed him a 7-year jail term alone. All in all, 2017 surely has to be the worst year of his life, making Talburt a token "jailbird" by the age of 22.

11/11/17: In early November, we received the Quincy Police Report of the dog bite case involving Jamie Owsley, 21, of Quincy. Owsley was pronounced dead at 3:38 am on February 26 after arriving at Blessing Hospital. Forensic Pathologist Dr. Denton ruled his cause of death was "penetrating and crushing injuries of the neck, due to a dog attack," states the report. Owsley's death received very little media coverage; no news reports were published after February 27.

The attack occurred at his home at 1005 1/2 Jersey Street. The dog involved was one of three pit bulls belonging to his roommate and cousin Kerry Talburt II. The police report states, "[Talburt] heard some rustling in the living room and heard his dog growling. He got up and went to the living room. He saw his pit bull, Hercules, had his mouth latched onto Owsley's neck. Talburt stated he grabbed the dog and pulled him off, took him into his bedroom, and put him in his kennel."

Family members said Owsley had a history of recent seizures. Between 3:00 and 4:00 pm of the previous day, Owsley suffered a seizure at his apartment. It is believed he suffered another one before the pit bull latched onto his neck, crushing his "larynx and hyoid bone" in his neck. Dr. Denton stated in his report, there were no defensive injuries associated with the dog bite neck injuries, "consistent with Mr. Owsley being unresponsive, but alive during the attack," he wrote.

When [Talburt] looked into the living room, his full-breed male pit bull, Hercules, had his mouth latched on to Owsley's neck. Talburt said he pulled the dog off Owsley's neck and went to take the dog into his room. Talburt said he almost fell in the doorway and smacked the dog against the wall. He then put the dog in the kennel. Kerry stated he believes that is where the blood on the wall came from, when he hit the dog on the wall. - Quincy Police Report

The Roommate and His Pit Bulls

During police interviews, Talburt said he kept three pit bulls in his apartment. He said Hercules, a male blue pit bull, was about 4-years old, Java was about 2-years old and Hoss was about 1.5 years old. "Talburt indicated during the interview that if Java and Hoss were out of their cages, that Hercules would be in his cage because they did not get along," states the report. Talburt said Hercules had bitten three people prior to biting Owsley, including a bite that required stitches.

On March 7, Hercules was put down. But Talburt's troubles were just kicking in. On July 8, Talburt was arrested after allegedly allowing one of his pit bulls to injure a man. Talburt was charged in Adams County Circuit Court with six felonies: home invasion, aggravated battery, reckless conduct, criminal trespass of a residence and two counts of obstructing justice. Police said Talburt got into an altercation with his downstairs neighbor. His dog got loose and bit the man in the face.

The Quincy Police Department said officers were called to 1005 Jersey on July 8 in response to a report of a 30-year-old man who was bitten in the face by a dog. Police said Talburt had gotten into an altercation with his downstairs neighbor, and Talburt's dog got loose and bit the man.
Charging documents say Talburt put his thumb in one of the other man's eyes and allowed the pit bull to bite him. They also allege he gave false information to police." - Herald-Whig, September 12, 2017

Kerry D. Talburt II, 21-years old, faces up to 30-years in jail if convicted of the home invasion charge. It is a Class X felony, the most serious felony offense in Illinois short of first-degree murder. If convicted of the other charges, he also faces the possibility of consecutive sentences. In October, Talburt pleaded not guilty to all charges. A jury will hear his case in the future. Adams County Court online records show that Talburt is no stranger to criminal legal proceedings. 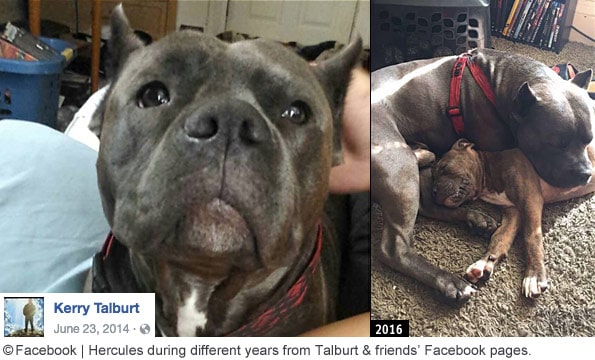 02/27/17: Coroner Releases Name
Quincy, IL - A 21-year old man died after a dog attack early Sunday morning. Adams County Coroner Jim Keller identified the victim as Jamie Owsley of Quincy. Police said that a death investigation was underway. Police said they received a call from the emergency room about a person with a dog bite. The attack occurred at 3:26 am Sunday morning at 1005 Jersey Street, inside the two-story brick home. A Beware of Dog sticker was adhered above the front door.

No other details will be released until the final autopsy results, which could take up to 2-weeks. 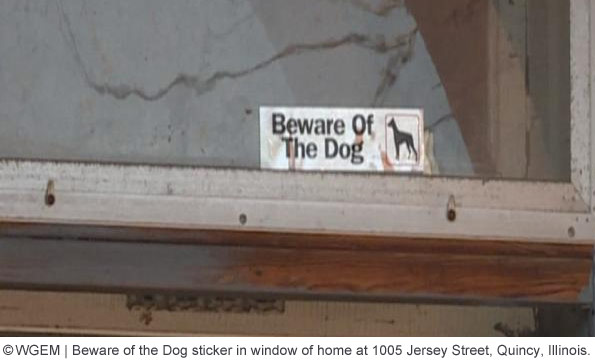 Baseline reporting requirements:
Law enforcement departments across the United States should release consistent "baseline" information to the media and the public after each fatal dog mauling, including these items.
Tweet
Share465
Tweet
Share465
Donate Now