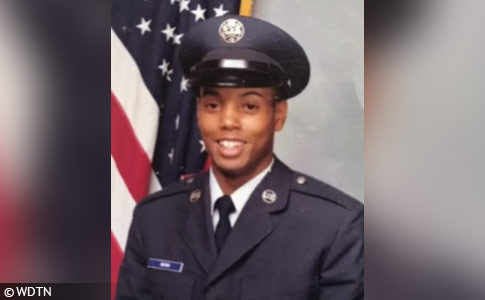 Maurice Brown, 60-years old, was mauled to death by a pit bull in Dayton, Ohio.

Low-Level Charge
UPDATE 08/31/18: Over 16-months after a man was mauled to death by a pit bull, authorities have charged a 28-year old man with a misdemeanor. This week, the Dayton prosecutor’s office filed a first-degree misdemeanor charge against Anthony Austin, whose address in court records is 345 Middle Street. On April 25, 2017, Maurice Brown died of injuries an blood loss after a pit bull residing at 345 Middle Street broke free of its chain and viciously attacked the man, killing him.

"Kind of feels like a slap in the face" that it's only a misdemeanor count. "A misdemeanor for a death -- that's disturbing." - Victim's brother, David Brown.

Dayton city prosecutor Stephanie Cook agreed the charge was inadequate. "It seems woefully inadequate when you’re dealing with a fatality to be charging somebody with a misdemeanor … that’s where we’re at right now," Cook said. After Klonda Richie was brutally killed by her neighbor’s two pit bull-type dogs in 2014, local lawmakers introduced the Klonda Richie Act to increase penalties statewide after a dog seriously injuries or kills a person. The Act failed to pass.

In addition to the "late" misdemeanor charge after Brown’s mauling death, the Dayton Daily News uncovered a serious protocol failure in the police response to his death. An internal investigation of this failure was also mishandled, making it impossible for the department to discipline the officers. A commander's review of Brown's death said the officers "failed to render immediate assistance and/or first aid." That paperwork was submitted late, muting the entire internal investigation.

The Dayton Daily News continues to pursue the dash cam video recordings of the police response in Brown's mauling death. As of August 31, 2018, Dayton police have not released the recordings, claiming there is still an active investigation into the incident. Yet, Dayton police "routinely" release cruiser cam footage to news outlets during active investigations, in some cases, less than 24 hours after an incident. So one can only presume these dash cam video recordings are damning.

04/26/17: No Progress on Investigation
Dayton police continue to investigate who owned or cared for the pit bull that fatally attacked a 60-year old man Tuesday morning, along with three other pit bulls seized from the backyard of the home at 345 Middle Street. During a press conference yesterday, Lt. Andrew Booher indicated that police were seeking out tenants of the home to interview. It remains unknown if the tenant(s) or other people associated to the 345 Middle Street home are relatives of the property owners.

Police reports show that a dog attack has occurred at the property before. In 2011, a 9-year old girl was bitten by a pit bull-mix and received 50 stitches. She also endured rabies shots. The attack occurred at 345 Middle Street, but the dog's owner lived on West Riverview Avenue. Between 2008 and 2012, a dog owner living at 345 Middle Street was cited multiple times for not licensing his two male pit bulls, according to the Montgomery County Animal Resource Center (ARC).

While police scramble to interview neighbors and track down tenants after the deadly pit bull mauling, we must share with our readers a horrific irony. The estate of Klonda Richey, who was brutally killed by her neighbor's two dogs in 2014, is currently suing the director of ARC, Mark Kumpf. Richey had complained to ARC about her neighbor's dogs 13 times before they killed her. ARC personnel can be seen in this video, investigating the city's most recent fatal dog attack.

Despite the speculation of possible criminal charges after Brown's death, one need only to recall that after Klonda's death -- who was killed on her own property -- authorities could only charge the dogs' owners, Andrew Nason and Julie Custer, with misdemeanors.1 This egregious flaw in Ohio state law is why Sen. Bill Beagle continues to introduce the Klonda Richey Act. "If stiffer penalties will scare owners into being more responsible then I think that's great," Beagle told Fox 45 News.

Greta Parks, who lives on Klonda's street and saw the aftermath of the horrific attack, also spoke to Fox 45. "Poor lady's body laid out there on the street for hours," she said. During these very hours, while investigating the fatal mauling, Director Kumpf tells the media, "We've never located them or seen [the dogs]." Simultaneously, Kumpf was busy "correcting" the media, saying the dogs involved were "mastiff-mixes" to deflect early police reports of the dogs being pit bulls.2

WDTN spoke with the victim's two siblings. Maurice Brown was a graduate of Jefferson Township High School who played in the band. Brown is also a United States Air Force Veteran, where he served as a mechanic. David Brown, the victim's brother, said it does not surprise him that Brown was up so early that morning. "That’s how we remember him -- artistic. Most of the world is rigid and on a schedule. He was a non-schedule type. He enjoyed the world at its quietest," David said.

Both David and his sister, Angela Brown, hope that some form of justice is served. "This could have been a child walking to school, mauled to death. It could have been anyone, it just happens to be my brother. These dogs are bred, bred for that trait of being vicious and you should be held accountable if you cannot control them,” David said. We too hope for justice. However, currently police and ARC do not even know who the dog's owner is and the state law is weak in this area.

Read extensive coverage from the Dayton Daily News, "The body count is getting too high." 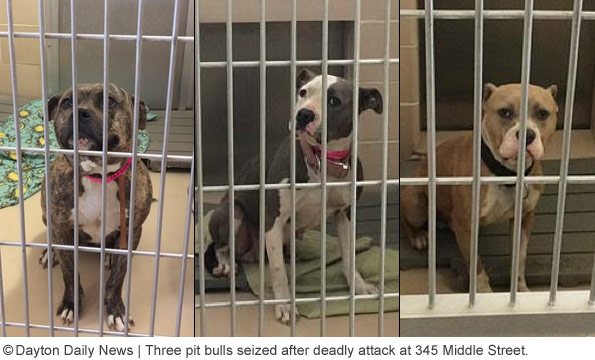 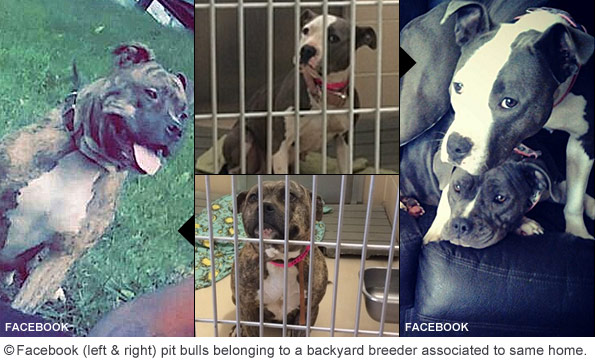 04/25/17: Mauling Victim Identified
The man mauled to death by a pit bull Tuesday in Dayton has been identified. Dayton police say Maurice Brown, 60-years old, was killed by a pit bull early Tuesday morning. Police said the man did not live in the area. Four pit bulls were kept on the property at 345 Middle Street. Police shot and killed the pit bull that was actively attacking Brown. The other three were taken into custody. So far, it is unknown who owns the dogs. The property's owner resides at a nursing home.

"Yet, here we are again, continuing to talk about another fatality from another out-of-control dog and an irresponsible owner." - Sen. Bill Beagle

WHIO-TV reached out to state Sen. Bill Beagle who introduced the Klonda Richey Act in 2014 and 2015 after she was killed by her neighbor's two dogs. The bill increases penalties after serious and fatal dog attacks. Last year, the bill passed the Senate in the final days of the session. Beagle vowed to reintroduce the legislation, but not before revisions are made. "We had some folks that wanted to see some changes," Beagle said. We hope these "folks" are not out-of-state lobbyists.

04/25/17: Pit Bull Kills Man in Dayton
Dayton, OH - Early Tuesday, Dayton police responded to a home in the 300 block of Middle Street after neighbors heard a man yelling for help and dogs barking in the background. When officers arrived, they found a man seriously injured after being mauled by a dog. Police described the victim as an “innocent” middle-age male who was walking in the area. Police said the dog is a male pit bull. They shot and killed the dog and removed three other pit bulls from the home.

"Near Riverview Avenue there's a man outside yelling 'Jesus help me. Help me,'" the caller said. "Sounds like he's in pain." - 911 caller, WHIO-TV

The deadly attack happened at about 5:15 am. Police said the pit bull was able to break its chain and attack a man who was walking in a nearby alley. The victim was transported to Miami Valley Hospital where he was pronounced dead. Initially, police had to search for the dog, described as a tan pit bull. After they hunted it down, they shot and killed it. Currently, police are awaiting a search warrant to enter a house at 345 Middle Street. Police have not released the name of the victim.

This man's death marks the third fatal dog attack in Dayton since 2014 and the fourth in Montgomery County since 2012. In February 2014, Klonda Richey, 57-years old, was brutally attacked and killed by her neighbors two dogs. Richey had reported the dogs to authorities over two dozen times before the attack. Five months later, Johnathan Quarles, Jr., 7-months old, was killed by his babysitter's pit bull. The babysitter, Kimiko Hardy, was later convicted of six felonies.

"It's a very unfortunate precedent for this city. And hopefully we can get a handle on that rather quickly." - Lt. Mark Ponichtera, referring to the Dayton fatalities

Two weeks after the death of Quarles, Jr., a 59-year old woman was fatally attacked by her daughter's pit bull in Butler County, which is adjacent to Montgomery County. At the time of the attack, Cindy Whisman was babysitting her 2-year old grandson when her daughter's pit bull latched onto her neck, killing her. Neighbor Wayne Walker, who rushed over help said, "It looked like [the dog] took a chunk of her throat out around the jugular." The child was not injured.

View the DogsBite.org Google Map: Ohio Fatal Pit Bull Maulings.
1In April 2017, Andrew Nason, 32, was sentenced to 5 years in jail for abusing a 2-year old child. He was found guilty of causing severe head injuries to his girlfriend's daughter in 2012. The same child depicted in the "Fear Thy Neighbor" episode about Klonda Richey. Watch the episode on Google Play here.
2
Instead of being fired after Klonda's death and a subesquent fatal dog attack, Kumpf was given a pay raise.
"Mark Kumpf, director of the Animal Resource Center, was given a wage increase of 2.5 percent, from $80,562 a year to $82,576. This decision has angered family members, friends and neighbors of Klonda Richey, who was mauled by two mixed-mastiff dogs in February, 2014, outside her Dayton home...
"A difficult year? That’s an understatement, I’d say," said Richey’s cousin, Carol Myers. "In my opinion, the man should be fired, not be given a raise." -
Steven Matthews, "Montgomery County dog warden praised after 'difficult year'," Dayton Daily News, May 13, 2015 (www.mydaytondailynews.com)