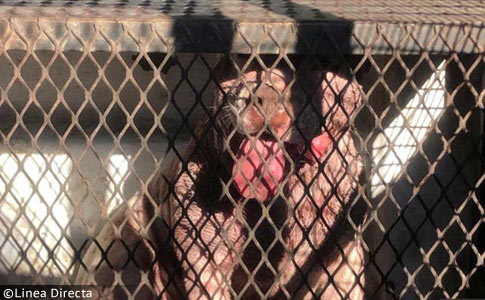 Throughout this post we are linking into Spanish language news articles. If you are using Google's Chrome browser, it will automatically translate for you. In any browser, you can paste the URL into this left box. Then in the right box hit the open icon (a small box with an arrow pointing upward).

Pit Bull Kills Owner
Saltillo, MX - On May 19, media outlets in northern Mexico reported that an 18-year old man was attacked in the neck by his pit bull and died. The fatal attack occurred inside the victim's home located in the Central Zone of Saltillo, Mexico. The cause of death of Miguel Ángel Aguilar Hernández was hypovolemic shock (blood loss) due to the severing of his internal carotid artery. Though no one witnessed the attack, it is speculated an epileptic seizure triggered the attack.

The victim's mother, Veronica Trinidad, discovered him dead in a room covered in blood when she returned from work. The dog's name is "El Diablo," which translates directly to "The Devil." Trinidad told investigators that "The Devil" is a brave dog, but became nervous every time her son suffered an epileptic attack. Trinidad also claimed the brutish, hulking family pet is a presa canario, not a pit bull. Thus, the owners of pit bulls are no different in Mexico than in the United States.

Trinidad also speculated to municipal police investigators that her son "probably suffered an epileptic attack" and then "fell on the animal."

More fairy tales were conjured up by El Guardian, a gossip and viral website. Such as, the pit bull was only trying to help the victim ("was not to harm him, simply to help him") and ended up killing him. "The Devil" pulled him with the "intention of turning him onto his back, but one of the bites cut his carotid artery," states the Google translation. "The Devil" is currently under observation, and could be up for adoption, states the translation. Information from El Guardian is not credible.

Not a Presa Canario

Presa canarios always have a black mask and are either brindle or fawn. Presa canarios are a mastiff-type with a heritage of fighting and guarding (one of several gladiator breeds). Like similar breeds, such as the cane corso, today's presa canario is the result of a "reconstructed breed" by dangerous dog breed enthusiasts in the 1970s,1 because the original breed from the Canary Islands became extinct. Authentic presa canarios are rare in the U.S. and cost upwards of $1,000.

"The Devil" is an oversized, overweight pit bull that is seen covered in so much blood, its coat color could be mistaken as being red. A similar oversized pit bull killed its owner in Washington D.C. in 2018. Due to pit bull "designer breeds," chiefly bred by American bully breeders, larger and bulkier pit bulls have become much more common and have carried out multiple fatal attacks in the U.S., including: Morgan Crayton in 2019, Cecille Short in 2017 and Mia DeRouen in 2014.

Excuses Have No Borders

Last year, after three people were killed by a family pit bull, it was speculated afterward that a seizure must have triggered the violent mauling. Two of these attacks were owner-directed, when the dog killed its longtime owner, 44-year old Melissa Astacio and 52-year old Homer Utterback. The third attack was directed at a family friend, 21-year old Dustin Bryan. In two cases, no one witnessed the "start" of the attack so assigning blame to a seizure is highly questionable.

The same fairy tales El Guardian reported have long been in American media too. Of the 12 fatal dog maulings we have recorded that allege the victim was having a seizure, 100% involved pit bulls and nearly all involved killing their owner.2 It's unclear why a seizure wasn't surmised after a woman using a wheelchair was speculated to have either rolled over the pit bull or fallen on the canine, thus triggering the lethal attack. That fatal attack occurred in Ft. Worth earlier this year.

Only dog breeds with a well-identified risk for inflicting severe injuries, chiefly pit bulls, have storied “excuses and theories” for attack triggers.

There are no "seizure" or "falling on the dog" allegations to excuse a fatal dog mauling when a German shepherd, golden retriever or other dog breed attacks. There are only excuses, such as a "seizure" must have triggered the pit bull to rip out its owner's throat or a "thunderstorm" must have prompted the pit bull to crush a child's head, about dog breeds with a well-identified risk for inflicting severe damage. Such "speculations" rarely exist when other dog breeds fatally attack.

In a similar 2012 rottweiler case, the second top-killing dog breed, family members speculated "Zeus" was only trying to drag its owner to safety after she collapsed and died due to natural causes. "Zeus" was still deemed vicious and ordered destroyed afterward. At that time, Captain Ron Salcer said the dog was deemed vicious based on the severity of Baker's wounds and because the dog regurgitated part of the woman's bra about a week after it was impounded.

"[It] shows that he was very aggressive if he would bite and chew to the point that he would take off her brassiere and swallow it." - Captain Ron Salcer

Miguel Hernández, 18-years old, was killed by "The Devil" in cold blood -- the dog severed the internal carotid artery in his neck. The attacker was an oversized, overweight family pit bull or pit bull-mastiff mix, not a rare, expensive presa canario. No one witnessed the attack, but a seizure was speculated as a trigger for the lethal attack. Excuses to explain away sudden pit bull violence are not limited to the United States. These excuses have no borders or language barriers.

Outside of a seldom rottweiler case, only pit bulls are afforded special excuses after inflicting extreme violence and death upon a person. Suffering a seizure, falling on a dog, the sound of a thunder, etc., are not activities that would cause any other domesticated dog breeds to inflict a fatal attack. If that were true, thousands of Americans would be killed by dogs each year. These excuses and "speculations" only seek to "normalize" the extreme abnormal aggression in pit bulls.

Finally, why did the family name the dog "The Devil?" Why not instead the archangel Michael or any warrior known for bravery? A 2002 study discusses the Devil in Mexican popular culture from 1750 to 1856.3 By the late colonial period, the Devil had become a term to explain accidents (Mira lo que hace el diablo) or "as an excuse or a reason for unacceptable conduct, such as violence." Sadly, when Trinidad found her lifeless son, she might have said, "Look what the Devil has done." 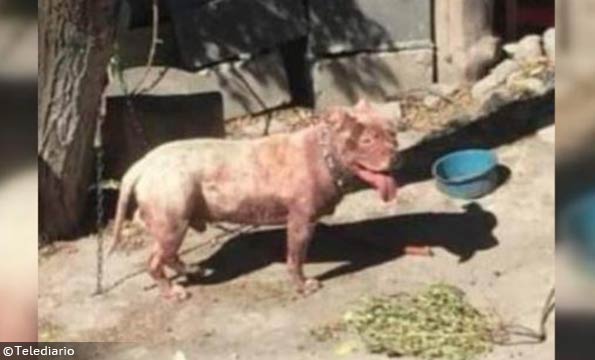 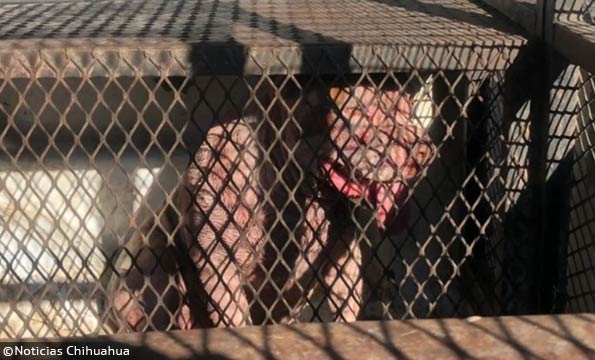 1The AKC states: "In the 1970s, a group of Italian fanciers banded together to revive the breed of their rustic ancestors. The Society Amorati Cane Corso (Society of Cane Corso Lovers) was formed in 1983..." and "Reconstruction of the nearly extinct Presa Canario began in earnest back in the early 1970s. Reputable breeders bred strong Presas that were rustic, massive..." View side-by-side images during the reconstruction phase.
2There is a 13th victim who suffered from seizures for years because of brain trauma whose rottweiler inflicted severe dog bite injuries at the time of death. This was an unreported fatal dog mauling, so there were no media reports capturing conjecture. Interestingly, of these 13 victims, 38% were between 21 and 28-years old, a rare age group for fatal dog mauling victims. Finally, there is a 14th victim as well, which was also an unreported fatal dog mauling. After we published our post about the death of Teena MaWhorter, a family member wrote to us in part, "What you didn't find out is that she had a seizure and fell on the dog which scared it. All dogs when startled lash out." All three parts of the speculation are intact: "had a seizure" and "fell on the dog" which "provoked" the family pit bull to fatally attack. MaWhorter's cause of death was determined to be, "severe blunt facial and head trauma."
3Mira Lo Que Hace El Diablo: The Devil in Mexican Popular Culture, 1750-1856, by Sonya Lipsett-Rivera, The Americas 59(2):201-219, October 2002.