Sharon Baldwin, 60, died after being mauled by a pit bull brought to her home a week earlier.

Mauling by Canine
Fort Worth, TX - On April 12, a 60-year old woman died after being mauled by a dog, according to the Tarrant County Medical Examiner's Office. Sharon Baldwin died due to "mauling by canine," states the examiner's website. The manner of death was an accident. The attack occurred on March 28 in the 800 block of East Hammond Street at Baldwin's home. A man who stayed at her home told animal control officers he had taken in the stray dog several days before the attack.

According to the Star-Telegram, "authorities" blamed the attack on Baldwin by either rolling over the dog in her wheelchair or falling on the canine, prompting the dog to attack. The dog attacked her arm, shoulder and neck. So far, there are five red flags in this news report. One, the unfamiliar dog was added to Baldwin's home just days before the attack. Two, no one witnessed the attack, thus it cannot be determined if she rolled over the dog in her wheelchair or fell on the canine.

Can it be determined if the dog dragged her out of her wheelchair, as we have seen multiple pit bulls do during fatal attacks in the past, including earlier this year? Three, according to the Star-Telegram, city officials said the dog had been staying at the home "without any problems" prior to the attack, despite the stray dog only being known to the victim for several days. Four, the dog attacked her neck. Five, the April 13 Star-Telegram article did not report the breed of dog.

Our concern is less directed at the newspaper. The entity can only report information that the unnamed officials have released. In this case, as we have seen in many other fatal dog maulings, the information released by "authorities" has been insufficient and frankly, cruel towards the victim. It is unclear if the "wheelchair or falling" information is even valid or just a "speculation game." The start of the attack was either witnessed or it was not witnessed. There is no gray in-between.

On April 14, the Star-Telegram reported the pit bull was euthanized Monday. The dog had been in the custody of animal control since the attack and was "evaluated before it was euthanized." Red flag number six. What were the results of this evaluation? That information was not released. Finally, the last red flag is the unidentified man who lived with the disabled Baldwin, who brought an unfamiliar pit bull into the home he shared with her. That mistake that cost Baldwin her life.

CBS DFW reported additional details. The unidentified man found the dog a week before the attack, according to officials. He was apparently caring for the dog until its unidentified owner came forward. The relationship between the man and Baldwin is unknown. There were no issues between the two residents and the dog until something happened Saturday that led to the attack. Thus, leading investigators to speculate the "wheelchair or falling" scenarios caused the attack.

"Officials learned there seemed to be no issues between the two residents and the dog until that Saturday when something happened that led to the attack. Investigators believe the woman may have either rolled over the dog with her wheelchair or fell on top of it."1 - CBS Dallas/Fort Worth

In a reverse course action, we are now taking back that our concern was not more directed at the Star-Telegram. The CBS DFW report contains more reliable information. Investigators typically always want to know "what led to a violent dog attack," even though most fatal pit bull maulings are either unprovoked or the stimuli was minor. For all we (or anyone knows), Baldwin fell out of her wheelchair for any number of reasons and the pit bull attacked her completely unprovoked. 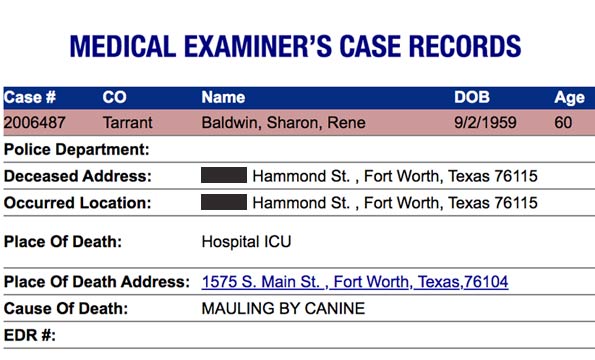 The cause of death of Sharon Baldwin, 60-years old, of Fort Worth, was "mauling by canine."

1The word "may" expresses "possibility" not definitive fact. The Star-Telegram piece expressed this as "fact."

Baseline reporting requirements:
Law enforcement departments across the United States should release consistent "baseline" information to the media and the public after each fatal dog mauling, including these items.
Tweet
Share346
Tweet
Share346
Donate Now

18 thoughts on “2020 Dog Bite Fatality: Woman Dies After Pit Bull Attack in Fort Worth; Cause of Death 'Mauling by Canine'”