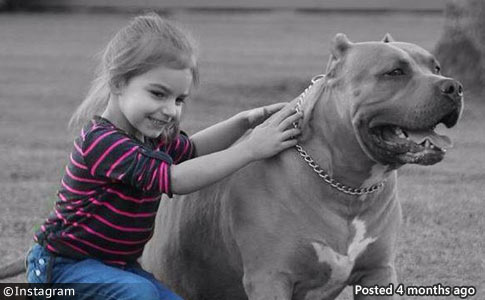 No Steroids in Second Dog
UPDATE 04/11/14: Steroids tests performed on the family's second pit bull came back negative. The second pit bull, Khloe, was not involved in the violent attack on March 25 that took the life of a little girl and ended after police officers fired 12-13 bullets into the 130-pound pit bull named Niko. Despite Niko's sire, UKC's Most Wanted Kimbo (a UKC registered American Pit Bull Terrier), also weighing 130-pounds, Houma police suspected that Niko's "hefty" weight was due to steroids.

It is not rocket science when a sire produces a dog similar to itself after a chosen mating with another UKC registered American Pit Bull Terrier.

This is "doggie breeding" genetics 101 readers. Surprisingly, Donna Reynolds of BadRap appears in the latest Houma Courier article and gets backed into a corner when asked about Niko's size. Reynolds is connected to the "hive mind" of the Pit Bull Propaganda Machine and like all of its drones, denies that genetics plays a role in the pit bull breed. Instead, "It's all how you raise them." Reynolds doubted that steroids affected the dog's size, but that genetics were the likely cause.

"I've never met a dog whose size was exaggerated by steroids, so I tend to doubt the theory of them being used to increase this dog's size," said Donna Reynolds, director of BadRap.org, a pit bull advocacy group based in Oakland, Calif. If the dog wasn't injected with steroids, its genetics may be the cause for its large and muscular build, Reynolds said. - Donna Reynolds of BadRap

04/04/14: Testing Second Dog
On April 1, HoumaToday.com reported that Niko's owners are "still not talking" and that the investigation into the mauling death of Mia DeRouen, 4, had come to a standstill. Megan Touchet, the girl's mother who was also injured in the attack, and her boyfriend Kerry Dominique are not talking to police under advisement of their attorneys. "We're still investigating this case aggressively. We're just at a roadblock right now," Houma Police Chief Todd Duplantis said.

Other matters have come up during their investigation, Duplantis said, including allegations that the dog may have been abused or injected with steroids to increase its size and strength, as well as the dog's definitive breed.

Rabies tests on the dog came back negative, Duplantis said, but tests to prove whether the dog had been injected with anabolic steroids were unable to be performed. - Houma Police Chief Todd Duplantis

The April 1 article also states that police officials are unclear about the dog's breed despite the animal having an online pedigree, along with Niko's sire and dam -- both UKC registered American Pit Bull Terriers -- also having online pedigrees. Niko's sire, UKC's Most Wanted Kimbo is also 130-pounds. Niko could not be tested for steroids post-mortem, according to police. Tests for performance enhancers are being conducted on the second pit bull, not involved in the attack.

What we find most disturbing in the past few days is that police want to know why Niko attacked, as if an unpredictable attack by a pit bull is unusual? As if it is not well established in appellate decisions upholding pit bull ordinances that these dogs often show no warning signals before an attack? No such befuddling mystery surrounds why a herding dog herds or why a retrieving dog retrieves. Nor is it a mystery why a dog breed, selectively bred to fight to the death, attacks.

The Pit Bull bites to kill without signal. Starkey v. Township of Chester (1986) ... the American Pit Bull Terrier breed possesses inherent characteristics of aggression, strength, viciousness and unpredictability not found in any other breeds of dog ... pit bulls are especially dangerous due to their unpredictability ... American Pit Bull Terriers have been known to be friendly and docile at one moment, willing to sit on your lap and lick your face, and at the next moment to attack in a frenzied rage ... Such frenzies can occur at any time and for no apparent reason. Garcia v. Village of Tijeras (1988) ... to increase its effectiveness as a fighter, certain pit bull traits have been selected and maximized by controlled breeding, including ... an extraordinary directness in their method of attack that does not include the common warning signs such as barking or growling displayed by other breeds; American Dog Owners Ass'n v. Dade County (1989) ... Pit Bulls have the following distinctive behavioral characteristics ... undying tenacity and courage and they are highly unpredictable. Vanater v. Village of South Point (1989) ... Pit bull dogs possess a strongly developed "kill instinct" not shared by other breeds of dogs. This testimony indicated that pit bull dogs are unique in their "savageness and unpredictability." Hearn v. City of Overland (1989) ... At the hearing regarding the ordinance's constitutionality, the trial court was presented with evidence which established that the specific breeds targeted by the ordinance possess inherent characteristics of aggression, strength, viciousness and unpredictability not found in other dog breeds. Singer v. Cincinnati (1990) ... The trial court also found that pit bulls tend to be stronger than other dogs, often give no warning signals before attacking Colorado Dog Fanciers v. Denver (1991) ... The referee found that the qualities of a pit bull as depicted by the logo are loyalty, persistence, tenacity, and aggressiveness. We consider this as a charitable set of associations that ignores the darker side of the qualities often also associated with pit bulls: malevolence, viciousness, and unpredictability The Florida Bar v. Pape (2005) ... The Majority of jurisdictions have accepted the proposition that dogs of this type have a propensity to be aggressive and attack without provocation Hardwick v. Town of Ceredo (2013)

We are sharing a selection of these photos to shed more light on Niko, as well as designer XL, XXL pit bull breeding.

The PDF contains about 30 images and reinforces the lineage of Niko -- both his sire (who also weighs 130 lbs1) and dam are UKC registered American Pit Bull Terriers. The document also contains images with hashtags written by the owner calling his dogs #pitbulls. The last portion, "The results of pit bull 'designer' breeding," may repulse some readers. It must be included, however, to show readers the deformity and exaggeration of designer XL, XXL pit bull breeding.

03/26/14: BTM Kennels Cached Page
Two of the below images are from BTM Kennels' Facebook page, breeders of XL pit bulls serving the Baton Rouge and Houma areas. BTM Kennels pulled their Facebook page at some point, but the page is still in Google Cache (See: PDF document version). It is no coincidence that images of pit bulls named Niko and Khloe covered their timeline. News articles posted an image of Niko earlier today and Khloe has been described as a 6-month old female pit bull by Houma police.

Do readers think this is the same Niko that killed Mia? How many offspring do you think Niko has produced? One post on the BTM Facebook page (likely posted on March 92) is an advertisement that promotes, "TG's Hidden Treasure - Niko - Open for Stud." A February 5 post reads, "My baby boy Niko." A January 14 post reads, "Niko at 25 months. This boy will have an exciting 2014. 40 points away from being an ABKC XL champion. Cardiogram, semen, pennhip tested. OFA soon." 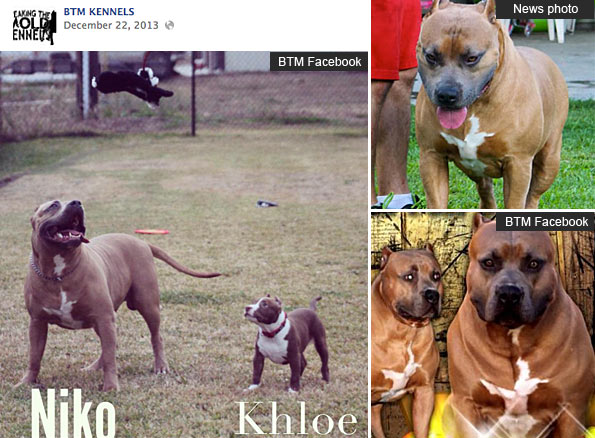 03/26/14: Fundraiser Soars
Family and friends have set up a fundraiser at GoFundMe to help the girl's family pay for funeral expenses. Through 344 contributors and only 3 hours so far, the effort has surpassed its goal of $15,000, by raising $16,570 (3:46 pm CST). Mia DeRouen, 4-years old of Houma, was brutally attacked and killed by her family's pit bull on Tuesday evening. The child was bitten numerous times  on the face, shoulders, and back, according to Houma Police Chief Todd M. Duplantis.

WWLTV reports additional details. The attacking pit bull, who was "staying at the home," was categorized as a "monster" by responding police officers. Duplantis described the scene as "horrific" and said that counseling was being offered to the officers who were on the scene. The dog was initially shot three times by officers, who then tried to enter the apartment. Unfazed by the trio of bullets, the dog charged the entering officers and was shot 10 more times before dying.

03/26/14: Passed Through Window
Houma, LA - A family pit bull killed a 4-year old girl3 Tuesday night at the Houma Highlands apartment complex and attacked her mother who intervened. The dog was running wild in the apartment when police arrived just after 7 pm, forcing the mother to barricade herself and 4-year old Mia DeRouen inside her bedroom. She passed her injured daughter to paramedics through a window.4 Mia was taken to the hospital with severe facial and head injuries; she did not survive.

By 9 pm, police had cornered the animal in the apartment and tried to shoot it through a window from the second floor balcony. The dog then bolted out of the apartment and was shot repeatedly by officers. Animal control personnel carried the animal away on a tarp. A second pit bull owned by the family was also seized by authorities, but was not believed to be involved in the attack. The child's mother, 27-year old Megan Touchet, remains hospitalized in moderate condition.

View the DogsBite.org Google Map: Louisiana Fatal Pit Bull Maulings.
1For additional repulsion, please see the website of the owner of Niko's sire, UKC's Most Wanted Kimbo.
2The Google Cache time stamp is March 9, so all posts labeled 6, 7 or 8 hours ago, were presumably from that day.
3WAFB reports that she would have celebrated her 5th birthday next week. On January 17, 2014 Kara Hartrich of Bloomington, Illinois was killed by her family's pit bull on her 4th birthday.
4Several fatal pit bull attacks have involved critically injured children passed through a window because the "family" pit bull was still berserking in the home, thwarting responders from entering, most notably, the death of Izaiah Cox.