Fatal Dog Attack Statistics
DogsBite.org recorded 36 fatal dog attacks in 2018. Pit bulls contributed to 72% (26) of these deaths -- over 8 times more than the next closest breed, "mixed-breed," with 3 deaths. Nine different dog breeds contributed to lethal attacks in 2018. Two deaths were unreported, but were captured through our records requests. The last time the CDC collected "breed" data about dogs involved in fatal human attacks was 1998. Pit bulls have killed over 370 Americans since.

This year's release includes statistics from our 14-year data set. From Jan. 1, 2005 to Dec. 31, 2018, canines killed 471 Americans. Pit bulls contributed to 66% (311) of these deaths. Combined, pit bulls (311) and rottweilers (47) contributed to 76% (358) of attacks resulting in death. When mastiff-type guard dogs and war dogs are added -- the types used to create "baiting" bull breeds and fighting breeds -- this small group of dog breeds accounts for 84% (397) of all dog bite-related deaths. In discussion notes, we examine 2018 trends, the rise of adult and female victims since 2005 and the escalation of pit bull-inflicted deaths since 2013.

DogsBite.org - From June 2018 to March 2019, our nonprofit sent out public records requests to 14 different jurisdictions regarding fatal dog maulings in 2018. In these filings, we uncovered two unreported fatal dog maulings, one in Nevada and California. Both fatal dog attacks were perpetrated by family pit bulls. These filings are also the primary reason why our annual and combined year statistics were not released in late February, our usual publishing timeframe.

In 2018, there was a surge in female victims, a surge in rescued or rehomed dogs killing a person, a surge in owner-directed fatal attacks (when a dog kills its owner), and the continued trend of adult deaths surpassing child deaths. Since 2016, we have been reporting on the rise of adult victims. In 2018, persons (≥ 10 years) comprised 58% of deaths. This is over a 90% increase from the early CDC study period (1979-1988) when only 30% of fatality victims were ≥ 10 years.1

Of the 16 adult females killed by dogs last year, 31% (5) involved a husband returning home to find his wife dead or nearly dead due to a vicious family dog attack. In 2 cases, Kentucky and Texas, the dog had previously attacked the female. The Kentucky case resulted in the husband being charged with wanton endangerment in the second degree, but a grand jury later dismissed the charge. 75% (12) of the attacks involved pit bulls, 19% (3) mastiff-types and 1 rottweiler.

2018 shows that rescued or rehomed dogs accounted for nearly 20% (7) of attacks resulting in human death; 57% (4) of these dogs were vetted by an animal shelter prior to adoption. Pit bulls inflicted 71% (5) of these deaths, including a pit bull on "death row" in West Virginia that killed its 64-year old adopter within 14 days. Susan Sweeney, 58, was killed even faster. Just days after her family adopted a mastiff-mix from The Animal Foundation in Las Vegas the dog brutally killed her.

Infant Khloe Williams was supposed to be "in good hands" while in the Florida foster care system. Her foster parent was a police detective too. But a female dog adopted from Pinellas County Animal Services 7 months earlier destroyed her. The dog belonged to the detective's mother, who was babysitting the child. The pair of male pit bulls that killed Bradley Cline, 62, in Nevada belonged to his son, who had adopted them from the Henderson Animal Shelter 8 months earlier.

The multi-year trend table shows that rescued or rehomed dogs involved in fatal maulings has increased by over 600% between the 1st and 3rd periods. Though the numbers are small, 3 deaths jumping to 21, it should serve as a "wake up call" to the shelter and rescue communities. Prior to 2010, fatal attacks inflicted by rescue dogs was an anomaly. If this growth rate persists, by 2023 rescue dog-inflicted fatalities will account for over 35% of fatal attacks within a single year.

Of the 10 owner-directed fatal attacks in 2018, 80% (8) killed adult females. Other attributes include: 3 deaths involved rescued or rehomed dogs; 2 deaths involved a married couple breeding Dogo argentinos when of one of the male dogs attacked and killed the owner's wife;2 2 deaths involved an owner being fatally injured while trying to break up a dogfight (both victims were male); and 3 deaths involved a longtime family pit bull suddenly, and brutally, killing it's female owner.3

The multi-year trend table shows that owner-directed fatal attacks increased by 67% between the 1st and 3rd periods. During the 3rd period (2015-2018), rescued or rehomed dogs were involved in one-third (8 of 24) of these fatal maulings. Pit bulls inflicted 67% (16) of these attacks followed by mastiffs (3), Dogo argentinos (2), rottweilers (2) and 1 mixed-breed. The combination of dangerous dog breeds and rescue pit bulls promises a continued rise in owner-directed attacks.

2018 marks another year when dogs killed more adults than children, 58% and 42% respectively. One can see by viewing the previous CDC study periods the dramatic change in the ages of victims killed by dogs. Children 0-9 years formerly dominated victims with 70%. This has since dropped to 40%. Since 2005, the fastest rising age group among adults is 50-69. We also know from the multi-year trend table that females within that age group have nearly doubled.

As children 0-9 years continue to fall over the 3 periods, 52%, 50% and 40%, and children 0-2 years continues to fall as well, 30%, 27% and 23%, there is still a painful eyesore. Infant deaths (< 1 year) are rising. Fatal infant attacks increased by 29% between the 1st and 3rd periods. During the 3rd period, infants comprised 15% of fatal dog mauling victims. Children 5-9 years, predominantly male victims, remained at a persistent level, making up 12% of all fatality victims.

The last chart we examine breaks the 14-year period into two parts, 8 and 6-years respectively, and shows the increasing number of fatal dog attacks inflicted by pit bulls over the last 6 years. From 2013 to 2018, pit bulls were involved in 73% of dog bite fatalities, despite only making up 7% of the total U.S. dog population. During this same period, rottweilers fell to 6%, placing them in close proximity to German shepherds (5%), mastiff/bullmastiffs (4.6%) and mixed-breeds (4.6%).4

Deadly attacks inflicted by rottweilers are predictable; the breed has already killed two young children in 2019. Yet, the rate of these attacks has slowed since 2007. The estimated population of rottweilers is 2.4% (average of last 3 years) and nearly 3 times lower than the pit bull population. Despite being in close proximity to several other breeds over the last 6 years, over the 14-year period, rottweilers still account for over twice as many deaths as German shepherds. 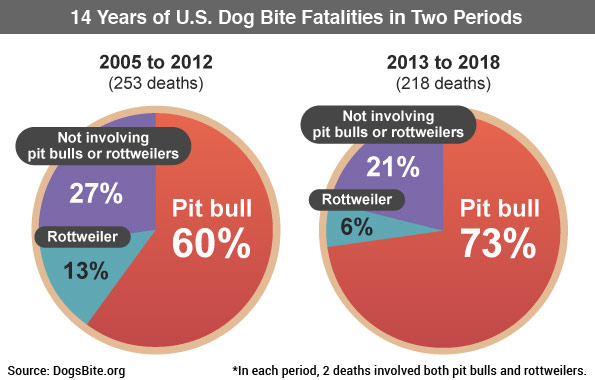 14 years of fatal dog bite statistical data is sufficient to evaluate the "breed-specific" issue. Pit bulls dramatically dominate attacks causing death, especially over the last 6 years, inflicting 73% of all deaths. The last time the CDC examined this issue was during the last century. Vigorous research, however, is ongoing across the country at Level 1 trauma centers regarding severe nonfatal dog bite injuries. The majority of these scientific studies also point to pit bulls as the leading culprit.

The multi-year trend table shows the dramatic change in the ages of victims of fatal dog maulings since the CDC study years (1979 to 1998). Over the last 4 years, adults have made up the majority of fatal dog attack victims, 60% vs. 40% children. Adults 50-69 years now comprise 24% of all victims; this is an 82% rise between the 1st and 3rd periods. Combined, females in the 30-49 and 50-69 age groups, now also make up nearly a quarter (24%) of all dog bite fatality victims.

Our call to action this year is simple: Do not adopt a pit bull or any fighting breed from a shelter or rescue, especially if you are a woman. Do not allow your family or friends to either. Attorney Kenneth Phillips of DogBiteLaw.com has been sharing this same message in videos since early 2018, usually with a Super Bowl theme (See: 2018 and 2019). In March, he also created a video directed at women because females are now the most frequent victims of pit bull violence. 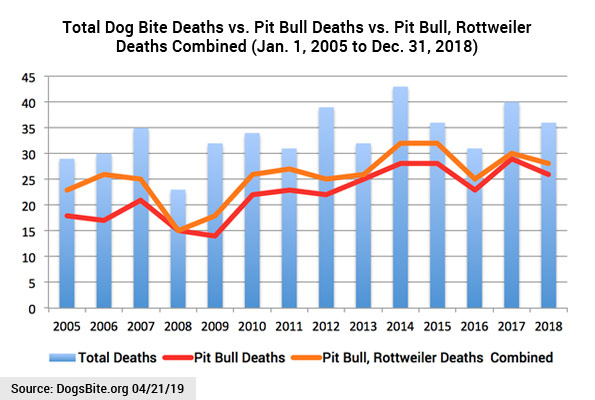 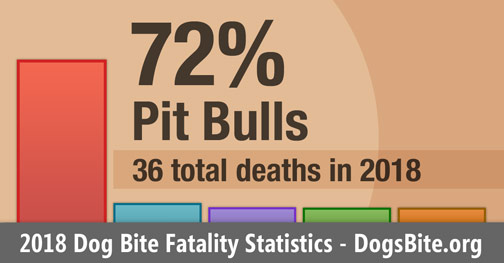 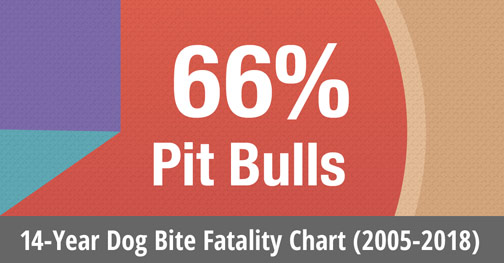