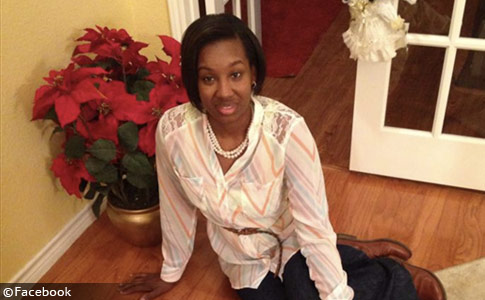 Kristie Kelley, 44, is one of five women in 2018 whose husband arrived home to find his spouse severely injured or dead due to a vicious dog mauling. All five women, ages 28 to 64, died.
Kelley was killed by her husband's solid white mastiff, a Dogo argentino, not a "short haired white Fila Brazilia." Kelley is the second spouse in 2018 killed by her husband's breeding Dogo.
In 2018, 80% of dog bite fatality victims, ages 28 to 64, were female. This is a sharp rise from the 13-year average of 54%. We looked more closely at Kelley's death to try to understand why.

UPDATE 01/28/19: On October 23, Kristie Kelley, 44-years old, was violently attacked by a mastiff at her home. She died four days later. We were able to obtain the police report through an Open Records request. The report tells the story of one of the five women in 2018 whose husband arrived home to find his spouse severely injured or dead due to a vicious dog mauling. In Kelley's case, she was also one of two spouses in 2018 killed by a Dogo argentino used for breeding.1

Kelley was married to Avrin Massey. At the time of the attack, a male Dogo was being kept outside in a fenced pen and a female mastiff-mix in heat, not implicated in the attack, was inside the home. The Hunt County Sheriff's report opens ominously. EMS had to transport Kelley to a Quicker Liquor store nearby because family members arriving at the home were "becoming hostile towards them." The Quicker Liquor location was also used as the helicopter landing zone.

Massey told deputies that when he arrived home, he saw the gate to the enclosed pen in the backyard was open and pieces of clothing were on the ground. He then went into the home. "Once in the residence, he found blood on the living room floor and located Kelley in the hallway," states the report. Kelley had severe lacerations to all four of her limbs. She was transported to the landing zone at Quicker Liquor on Highway 224 in Greenville then airlifted to Medical City Plano.

"Massey stated this is not the first time Kelley has been bit by this dog." Previously the dog had bitten her hand, states the report.

According to Massey, "once he was able to get his bearings" after finding Kelley injured, he called 911. He then "laid the phone down beside his wife and she was actually talking to 911 giving them the address," states the report. "Massey stated he did this because he was so excited, upset and crying that the 911 operator could not understand him." He then located the dog and contained it in the outdoor pen. He then fetched his shotgun, returned to the pen and shot the dog, killing it.

Massey stated he had been keeping both dogs in the house while he worked on the outdoor pen. Once finished, he did not place both dogs inside, but poured concrete along the bottom of the fence line to ensure the mastiffs could not dig out. After the concrete dried, he put the male in the pen and left the female inside the home because she was in heat. "Massey stated this was the first and only day the male was in the outside enclosure away from the female that is in heat."

Massey stated, "He does not know what happened or what caused the attack." He believes Kelley "had to have opened the gate." Massey did not believe the dog could have opened it. Photographs taken of the dog inside the pen after it was shot show the dog with its left front leg fully protruding outside of the pen. One can also see the distinctly all white dog with a black nose. Dogo argentino breeders must inbreed hard to maintain this -- the 100% white coat with black nose colors.

Last June, there were two back-to-back Dogo argentino attacks both involving the spouses of breeders. One was fatal and the other involved life-threatening injuries. The fatality victim was 28-year old Jenna Sutphin of Calvert County, Maryland. She and her fiancé owned a pair of breeding Dogos and had advertised puppies on Facebook. The male attacker's sire, Ch Yego Del Valor Blanco, and dam were both from Valor Blanco Kennel, which operates out of Maryland and Texas.

The attack in Fairfield, California involved a 29-year old woman. There were up to 20 Dogos in the couple's "yard of kennels" at the time. The victim's husband operated Dogos Del Gran Patron, a Bay Area kennel. It's website and social media accounts were removed after the brutal attack. By the age of 28, Sutphin lost her life and the other woman will suffer lifelong disfigurement. The stakes are high when breeding a ferocious fighting breed that is banned in multiple countries.

Then there is Kelley, whose Greenville home is located under 17 miles away from a Greenville-based Dogo argentino kennel named Solid Kennels. Greenville's population is only 27 thousand people. We thought this was startling. Furthermore, the Dogo Argentino Kennel website lists Dogo kennels in all 50 states. Two of the three kennels listed for Texas are Solid Kennels and Valor Blanco Kennels. We already know that Valor Blanco produced an offspring that killed a person.

Why would Massey state that his Dogo was a "male short haired white Fila Brazilia" (AKA Fila Brasileiro)? The two mastiff breeds have significant differences in physical characteristics. The Filas have very pronounced jowls, thick, loose skin, and are virtually always fawn, black or brindle. According to the breed standard, "white marks" are permitted on the feet, chest and tip of tail. "White markings exceeding one quarter of the body," is considered a "serious fault."

It can be argued the killer dog is a Dogo argentino-cross or a mastiff-American bulldog cross. However, it is not a solid white Fila Brasileiro.

Nine days after Kelley's husband finds her horribly injured by a mastiff, a husband in Kentucky will return from work to find his wife horribly mauled by a pit bull. The dog that killed April Collins had attacked her in the past, including the night before the fatal attack. Like Kelley, Collins was airlifted to a trauma center and never left there alive. Collins' husband is now being charged with second-degree wanton endangerment for allegedly leaving his wife in a situation that could cause harm.

Finally, what about the recently built outdoor pen with concrete poured at the fence line to prevent Massey's breeding mastiffs from digging out? Massey stated the male dog had only been in the pen for one day before brutally attacking his wife. But we see in the photograph there is already a gaping hole in the fencing -- the dog's whole left leg is protruding out. Apparently, it only took one day for this dog to wreak havoc on the new enclosure. These are zero margin of error dogs.

Of this same subset of 15 victims, ages 28 to 64, 80% were killed by pit bulls and 20% by mastiff-types. Five of these deaths involved a husband returning home to find his wife horribly mangled by one of these breeds or already dead. Kelley was one of these victims, as was April Collins, Susan Sweeney and two others. Kelley will be remembered as a brave and lovely person, who while still conscious after the vicious dog mauling, was the only person willing to direct 911 to her home. 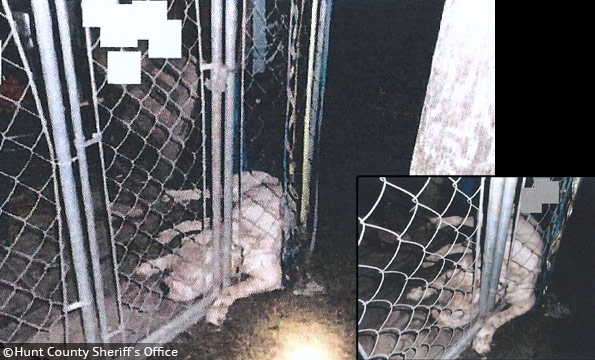 The fatal attacker, a solid white mastiff, seen in its enclosure after being shot to death.

10/29/18: Woman Dies After Mauling
Hunt County, TX - A woman died in a hospital after being attacked by a dog, the Hunt County Sheriff’s Office said Monday. On October 23, about 10 pm, a deputy responded to a home in the 2500 block of County Road 4311 after a report that a woman had been attacked by her dog and needed an ambulance. An American Medical Response unit was dispatched with the deputy. The victim was then airlifted to a trauma hospital in Collin County due to the severity of her injuries.

The victim has been identified as Kristie Kelley, 44-years old of Neylandville, who died while hospitalized on October 27.

The sheriff's office said that a preliminary investigation determined the female victim was alone with the dog when the attack occurred. Her husband discovered her inside the residence when he arrived home. Both the victim and her husband reside at the home and were the owners of the attacking dog. The Criminal Investigation Division was notified Saturday the woman died while in the hospital. Authorities are awaiting a final autopsy report from the medical examiner's office.

Though initial media reports did not contain breed information, a subsequent report states the attacking dog is a mastiff-type. The victim also has a mastiff-type dog in her Facebook photo album. The image was published in December 2017 and shows a recently pregnant female brindle wearing a baseball cap. In early October, a woman in Las Vegas was mauled to death by a male mastiff-mix her family had adopted from The Animal Foundation just three days earlier.

So far in 2018, nearly one-third (9 of 30) of all recorded dog bite fatalities have been violent attacks upon their owners or caretakers; the people who love, feed and care for these dogs. Six of these owner deaths involved pit bulls, two deaths involved mastiff-mixes and one death involved a dogo argentino. One-third of these deaths involved a "rescued or rehomed" dog. In the month of October, there have been 6 fatal dog attacks and 5 involved a dog killing a family member. 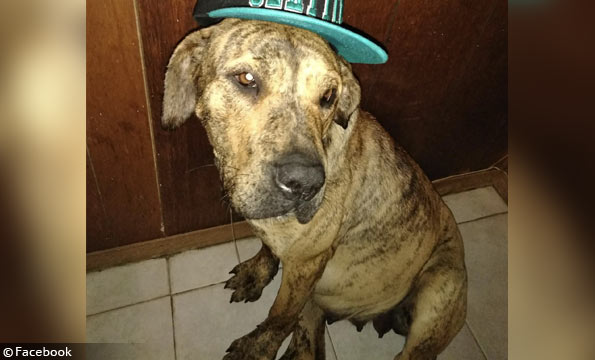 A female mastiff-type dog seen in the victim's Facebook album -- posted in December 2017.

1The solid white mastiff was shot to death by its owner before police arrived. There are no photographs of the dog standing in the sheriff's report.

Baseline reporting requirements:
Law enforcement departments across the United States should release consistent "baseline" information to the media and the public after each fatal dog mauling, including these items.
Tweet
Share872
Tweet
Share872
Donate Now

3 thoughts on “2018 Dog Bite Fatality: Texas Woman Dies After Being Horribly Mauled by a 'Solid White' Mastiff in Hunt County”