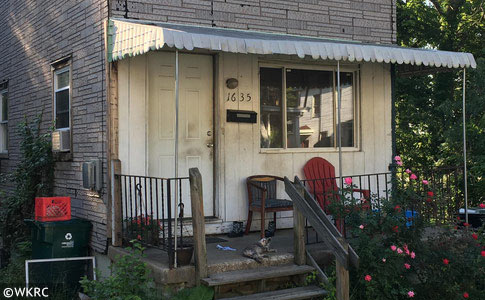 West Price Hill home where Della Riley, 42, was mauled to death by her own pit bull.

Seizure a Speculation
UPDATE 08/27/18: Della Riley, 42-years old, was dead by the time police arrived at her Dewey Avenue home. Arriving officers encountered a dog, which police described as a pit bull, standing over an unresponsive female. Officers shot and killed the dog after it "aggressively charged" them. The coroner determined the cause of death was due to trauma from a vicious dog mauling. When police fired on the dog, a bullet ricocheted and struck the victim who was in a post-mortem state.

Additional information became known over the weekend. Jon Seymoure, who lives next door, admitted on camera that he "guessed" Della Riley had a seizure episode that set off the fatal pit bull attack. He also admitted that her young son did not understand what had happened. "He was about 4-years old. To tell his neighbors, but I don't think he understood what was going on," Seymoure said. "If she had a seizure, then the pit bull must have gotten afraid," Seymoure said.

"It's sad to know your own dog could turn against you and snap like that ... It's sad to think that he don't have a mother anymore." - Jon Seymoure

Once again, there is absolutely no evidence the victim suffered a seizure before her own pit bull fatally attacked her. The medical examiner made no mention of a seizure or a history of seizures. From 2005 to 2017, 54 dog bite fatalities involved a dog killing its primary owner. Pit bulls inflicted 63% (34) of these deaths, over 8 times more than any other breed. Pit bulls killed their owners in all adult age groups vs. attacks without pit bulls, where 90% of owners were ≥ 50 years old.

From August 30, 2014 to December 18, 2014, Della Riley's Facebook page shows several photos of a male pit bull, named Graffiti, lying close to her son. On December 27, 2014, Riley posts an injury photo after Graffiti attacked her right arm and wrote: "This is what my dog did to me not to long ago. he didn't mean to do it to me he is a friendly and a lovable dog. Pit bulls are mid understudied dog" [sic]. Riley also states, "The dog is gone I'm not going to get another dog."

One of her friends reminds her in a comment that pit bulls "will turn on you any second" and that the dog could have mauled her baby. "The dog is gone. I had somebody take him to the pound," Riley replied. Riley never posted another public photo of her pit bull afterward. We do not know if the fatal attacker was Graffiti or a new pit bull she acquired after 2014. Media reports indicate there were two dogs in Riley's Dewey Avenue home during the attack: a pit bull and a rottweiler.

In a number of cases where victims were fatally mauled by their own dogs, the canine(s) had a history of aggression, including a serious attack on their owner beforehand -- attacks requiring surgery and hospitalization. Furthermore, Riley states back in 2014, "I'm not going to get another dog." Yet, she had two in her home when her own pit bull ripped her throat out in front of her son on August 22, 2018. In fact, she owned the top two killing dog breeds, a pit bull and a rottweiler. 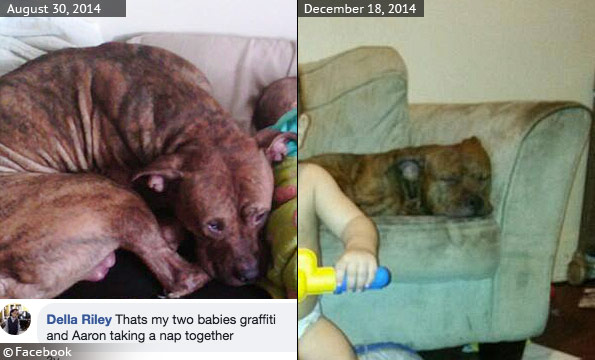 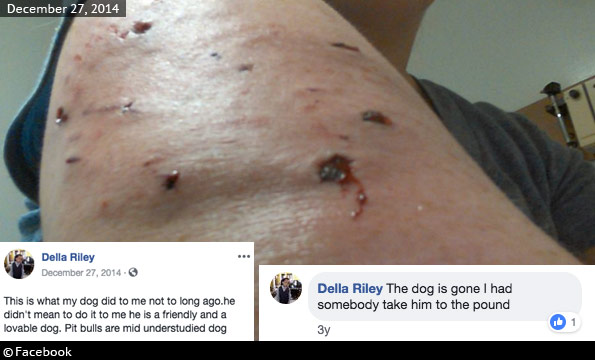 08/23/18: Pit Bull Fatally Attacks Owner
The Hamilton County Coroner confirmed that a West Price Hill mother was mauled to death by her own pit bull on Wednesday. The coroner identified the woman as 42-year old Della Riley. The coroner also stated that Riley suffered a bullet wound from a ricochet when police shot and killed the dog. Police fired on the canine after it "aggressively charged the officers." The woman was already dead when the bullet struck her, authorities said. The woman also owned a rottweiler.

First responders were initially dispatched to the home about 1:00 pm Wednesday after a report of a person suffering a seizure. The victim's 5-year old son ran from the house, asking neighbors for help. Jon Seymoure, who lives next door, told Fox 19 yesterday, "The mother had a seizure and the dog attacked her. From what I hear, he ripped her throat out." Apparently, the little boy witnessed the horrific attack. His father arrived while police were still processing the scene.

Cincinnati, OH - On August 22, 2018, at approximately 1:00 pm, the Cincinnati Fire Department (CFD) responded to 1635 Dewey Avenue for the report of a person having a seizure. Upon arrival, CFD discovered a female being attacked by a dog inside the residence and requested assistance from the Cincinnati Police Department (CPD). District Three officers responded and encountered the dog standing over an unresponsive female. As the officers entered the residence to render assistance to the victim, the dog aggressively charged the officers, at which time they discharged their handguns, striking and killing the animal.

Upon further investigation by the Hamilton County Coroner's Office, it was determined that the female was deceased prior to the arrival of CPD. The Office of the Hamilton County Coroner, Dr. Lakshmi Sammarco, conducted a post-mortem examination that determined the cause of death was due to trauma sustained by the victim who had been viciously mauled by the dog. It was also determined that one of the rounds fired by the responding officers at the dog traveled through a nearby mattress, ricocheted off the floor, and struck the female victim in the abdomen. It was confirmed during the autopsy that the bullet struck the body in a post-mortem state. | View full news release - Cincinnati Police Department

08/23/18: Pit Bull Suspected in Death
Cincinnati, OH - Fox 19 confirmed late last night that a woman was found dead after neighbors say she was attacked by her own pit bull. The attack occurred about 1:00 pm in the 1600 block of Dewey Avenue in West Price Hill. Neighbor's say a small boy ran out of the home, saying that someone was having a seizure, and a neighbor called 911. The Hamilton County Coroner said a dog was guarding the woman when paramedics arrived, so police shot and killed the animal.

"The mother had a seizure and the dog attacked her. From what I hear, he ripped her throat out." - Next door neighbor Jon Seymoure

Police are calling the case a "complex investigation" and continue to examine what exactly occurred inside the home. The 5-year old boy is the son of the woman, according to the Fox 19 report. "It's a tragic thing that it happens like that," said neighbor Marietta Alexander. She said the boy's father came home while police were still processing the scene. She expressed heartbreak knowing that a small boy witnessed it all. "I feel bad for the boy, I really do,"Alexander said.

Pit bulls have been involved in several fatal dog attacks where the victim had a history of seizures. As many of these attacks are unwitnessed, it is unknown if the attack caused the seizure or if the seizure caused the attack, or if there was a seizure at all. Our nonprofit has no other dog breed on record, except pit bulls, involved in a fatal dog mauling where a seizure might have preempted the attack. Some of these victims include: Jamie Owsley, Tonia Parks and Kelli Chapman. 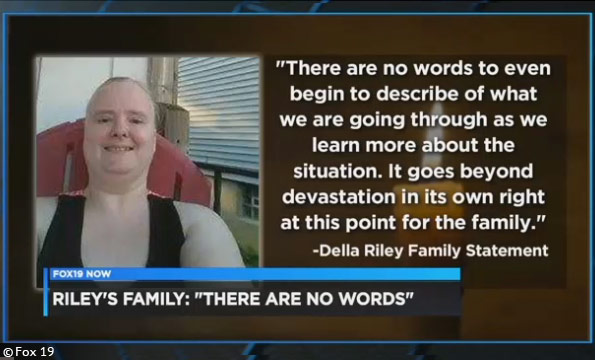 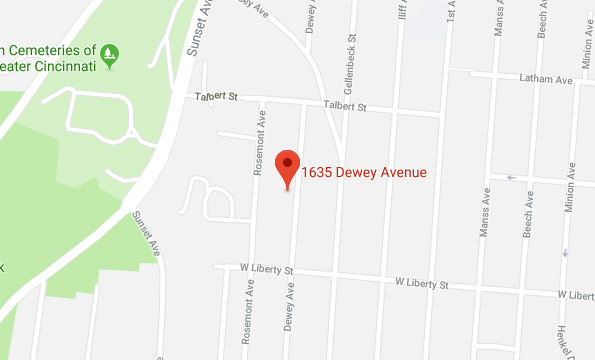 Baseline reporting requirements:
Law enforcement departments across the United States should release consistent "baseline" information to the media and the public after each fatal dog mauling, including these items.
Share560
Share560
Donate Now