Remembrance Video Released on the First Anniversary of his Death

From the start of the murmuration to the end, the footage depicts the path of the birds at Lady Bird Lake on their final flight at dusk in the fall of 2021. Like these birds, Richard now lives in the sky.

Prescott, AZ - Richard Buffalin, who began commenting on the DogsBite Blog in 2019, passed away on January 7, 2022 in Prescott, Arizona. We did not learn about his death until late March of that year. During the last five years of his life, Richard had walked over 12,500 pedestrian miles, about 50 miles per week. In his time of walking residential streets in Prescott, he experienced several "ambush charge attacks" by aggressive dogs. He believed that dangerous canines had more rights than pedestrians. DogsBite.org eventually became his home page, and he became a vibrant voice commenting on our blog.

It was not until he began walking seven miles a day that he became aware of dangerous canines bolting off-property and their cavalier owners -- both often excused by local authorities. "For more than five decades, I have engineered my life to evade two things: the hostility of the surface of this earth, and dangerous people," Richard wrote in 2019. "Only when I started walking seven miles a day, every day, did both of these things come crashing down upon my head in the form of people who let their dogs ambush attack pedestrians."

A memorial service was held for Richard on his birthday, March 21, 2022, according to his obituary notice. "In memory of Richard 'Richie' Buffalin," states the notice. "He will forever be in our hearts. He is remembered for his scientific knowledge, his humor, and his love for music. He is responsible for saving thousands of lives during his time here with us. He had 27 years of sobriety at the time of his passing. We love you and miss you Richie."

In late March, after not hearing from him in three months, we ran a search on Facebook and found the notice. That is when we first became aware of his death, and became more aware of his life outside of the context of dangerous dogs. In 2019, Richard stated in a comment: "I operate a church property that is being used for multiple daily meetings, and I interact with over a hundred people every day…" No doubt referring to some of the lives he saved during his lifetime.

Richard had corresponded with our nonprofit over the last few years, chiefly when he found a typo on the site, when a link was broken and when he became aware of a troll in comments. During 2021, we started communicating by phone, regarding separate legal matters that both he and our nonprofit were facing. It is that fall when the founder began filming the murmuration that occurred just before dusk at Lady Bird Lake each night. Our remembrance video of Richard ties four of these filming episodes together. His sister kindly provided the personal photographs of him.

It has taken our nonprofit a long time to finalize our remembrance video and this post because we miss Richard so much -- his voice is so clearly no longer present on this website. Comments are not the same without his barbed humor either. Once, after a mother was passed out on medications when her dog attacked her baby, he asked: "What kind of medications? Well, we can rule out anti-narcissism medications." Or his blunt, critical thinking ones, such as after voters repealed Denver's pit bull ban, "Human beings are the only species that forces another dangerous species on itself," he wrote.

Richard could always see through the chronic blame games that play out after attacks, obscuring the underlying problem, as well. After an 8-day old baby was killed by a relatively new family pit bull, Richard identified the factor that ties together many of the attacks documented on this website. “It is not a matter of lack of correct information, or lack of knowledge, or lack of learning, or lack of thinking, or lack of training, or improper raising," he wrote. "It is a matter of risk-taking behavior." He did not assign blame, he simply identified what the behavior was.

It wasn't until we wrote about Sebewaing Police Chief Steven Repkie in late July of 2022 that we even mentioned his death. Repkie had issued a "community advisement" about a neighborhood "living of fear" of a vicious pit bull named "Lucifer" that had attacked a child in the face, but police did not have the legal grounds to seize the dog. Richard would have appreciated Repkie's sentiment, who stated in the advisement: "I will NOT allow my community to be held hostage by a dog. People should NOT be afraid to walk through their neighborhoods."

Richard will be remembered most by our nonprofit for his love of humanity, his love of God, his wit and intellect and his deep genuine caring for people. He will be remembered for always stating the obvious, "An ounce of prevention is worth a pound of cure," and for stating the inconvenient truth, "The only good thing about dangerous breed canines is that they result in medical innovation." Richard will always be remembered for being a generous donor and loyal supporter of this nonprofit, who also encouraged other people to donate. And for every future murmuration we see, we will always be reminded of Richard, who now lives in the sky.

We selected some of his comments to share. Our prayers go out to his family members and friends as they struggle with his loss. Especially today, on the first anniversary of his death.

"The dog’s enclosure was not child resistant. The child’s flesh was not dog resistant. What can possibly happen in a few seconds?" - R. Buffalin, 11/26/2021

"After 12,500 pedestrian miles in Prescott in five years, and after three dogs sicced themselves on me in ambush charge attacks in that time frame, I marvel at pedestrians who are on the public street completely, totally vulnerable. I am just amazed at such a sight." - R. Buffalin, 06/14/2021

"The backyard did not also have to be full of fast food wrappers, cigarette butts, empty alcoholic beverage containers and spent cartridge shell casings. The two family pet dangerous breed canines were more than sufficient to effect the expected outcome." - R. Buffalin, 06/10/2021

"It’s comforting knowing that the veto survived an attempt to overturn. I am sure that the Dangerous Animal Industry will outspend victims on its advertising campaign in the months leading up to the November ballot initiative. The DAI generates megabucks that they will spend on campaign advertising, while the victims do not generate money; instead, they spend their money picking up and repairing the pieces of their shattered lives." - R. Buffalin, 02/26/2020 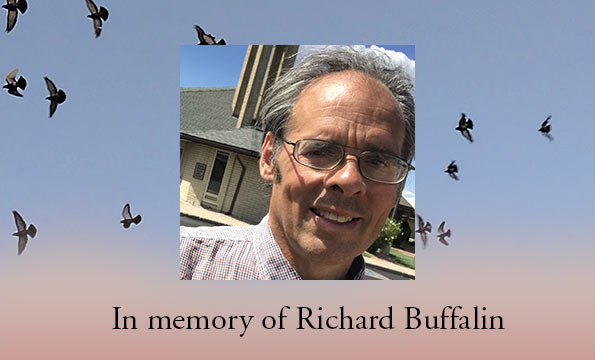 Richard Buffalin passed away on January 7, 2022 in Prescott, Arizona. He is dearly missed.

13 thoughts on “In Memory of Richard Buffalin, a Prolific Commenter on the DogsBite Blog, a Victims' Advocate and a Cherished Friend”