Police Respond to "Neighborhood Living in Fear" of Vicious Dog 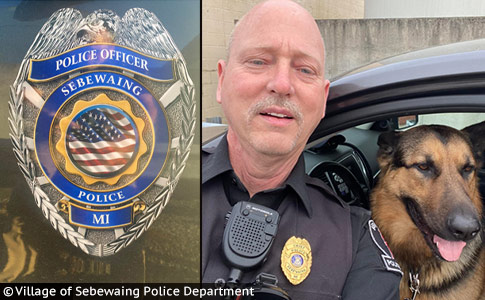 Community Advisement
Sebewaing, MI - On July 29, Sebewaing Police Chief Steven Repkie issued a Community Advisement after a pit bull, named "Lucifer," viciously attacked a child in the face causing severe injuries. "The bite missed her carotid artery by mere centimeters," states the release, and she will need reconstructive surgery. The owner of the dog was arrested on municipal charges, but still did not properly contain his pit bull. "The neighborhood was living in fear of Lucifer," Repkie said.

The neighborhood was "basically being held hostage in their homes, hoping and praying that this dog did not break loose and injure or kill someone," Chief Repkie said. In order to obtain a vicious dog designation in the state of Michigan, there must be two unwarranted bites, "except in extenuating circumstances." Chief Repkie worked with Assistant Huron County Prosecutor Alexander Pahany to achieve this, and thus were able to obtain a court order to seize the animal.

In no surprise to DogsBite.org, as the paperwork for the extenuating circumstances was being completed, "Lucifer" attacked a second person. An order to seize "Lucifer" was signed by the Huron District Court Magistrate on July 28. Chief Repkie and another officer then physically seized the "100 pound beast," he said. "We had to enter the home and catch Lucifer on a snare pole," Chief Repkie said. "To be honest, I’m still sore today from being on the end of the catch pole."

Ironically, as the paperwork was being completed, a second bite report came into the Sebewaing Police regarding Lucifer. When interviewed, the victim, an adult male, said he was riding his skateboard when from out of nowhere, he was attacked by a Pitbull that knocked him to the ground and viciously attacked him, causing significant injuries to his right arm. Fearing for his life and while the dog had his teeth firmly clamped onto his forearm, he was able to take hold of the dogs collar with his left hand and twist the collar to the point that the dog nearly lost consciousness. It then loosened it’s grip and the victim was able to get away. He identified the dog that attacked him as Lucifer.

An order to seize Lucifer was signed by the Huron District Court Magistrate and on Thursday morning, after finding a secure facility to accept Lucifer, Officer Matt Kuhl and myself went to the home to follow the court order and seize the animal. The resident of the home would not or could not bring Lucifer out to Officers. We had to enter the home and catch Lucifer on a snare pole. We then had to wrestle the dog outside and into a cage. Lucifer was taken to a secure facility to be housed pending court proceedings. - Sebewaing Police Chief Community Advisement

Next Repkie gave a "statement from me" that no one could appreciate more than the late Richard Buffalin, a devoted commenter on DogsBite.org, who passed away in January 2022. "I will NOT allow my community to be held hostage by a dog. People should NOT be afraid to walk through their neighborhoods. People should NOT have to sit on their back porch with a gun on the table in fear of being attacked," Repkie said. "I thank God that neither of the victims had been killed."

Additional charges are pending against "Lucifer's" owner, Chief Repkie said in the statement. He checks in on the 5-year old victim's condition frequently, he said, and has offered both Zeus and Apollo, his unit's two police K-9s, for "K9 Therapy" to help the little girl with trauma from the facial attack. He has also spoken with the skateboarder, the second victim, "checking on his condition as well," he said. He closed his Community Advisement with: "Strength and Honor Sebewaing!"

I will NOT allow my community to be held hostage by a dog. People should NOT be afraid to walk through their neighborhoods. People should NOT have to sit on their back porch with a gun on the table in fear of being attacked. I will, as expeditiously as I can, address matters such as this and to the fullest extent of the law, fulfill my duties to the citizens that I serve and enforce the laws of this Village, the State of Michigan and the United States of America.

I thank God that neither of the victims had been killed. I check in on the 5 year old often and I have offered Zeus and Apollo as “K9 Therapy” if needed to help her with the trauma of the attack. I have also spoken with our skateboarder, checking on his condition as well.

So in closing, we have Village leash laws that state, a dog must be on a leash no longer than 6 feet and controlled by a person capable of controlling said animal. Dogs are to be licensed and vaccinated. They are not to be allowed to be at large within the Village and wander through others yards or in the street.

We encourage readers to go through the comments on Chief Repkie's post. One person wrote, "I wish we had this kind of attitude in Caro. Bravo to you, I fear for my safety everyday in Caro, because they are unwilling to fight for the people, and only help the owners keep the dog. Thank you for standing up for your community!" Another called Repkie a "True Blue Hero, and I'm grateful our community has been blessed by having you in charge." DogsBite.org agrees in full!

The father of the little girl also shared a photo of her in the comment section. The father then admitted to being the owner of a pit bull himself, whose dog "has been in training since he was born and will be until the day he dies." No one said the father's pit bull was anything like "Lucifer," but nevertheless, the father had to defend his dog as if someone had. And, "Chihuahuas," the father proclaimed, "are the lead dog for dog bites but you never hear about them in the news."

We wish there were many more Community Advisements like the one issued by Sebewaing Police Chief Steven Repkie. We were moved to tears upon reading it. That is how rare it is for dog mauling victims to feel heard -- to feel there actually are laws that protect them -- even antiquated laws that require two serious bites before a seizure and vicious declaration. Recall the extenuating circumstances; Repkie and the prosecutor had been working hard to avoid the second attack.

That Chief Repkie made it a priority to declare that he "will NOT allow my community to be held hostage by a dog. People should NOT be afraid to walk through their neighborhoods," is another heroic rarity. Victims of dog bites and attacks understand just how much power the owner of one dangerous or intimidating dog has -- he or she yields the power to destroy an entire neighborhood -- and the only response by animal control is, "Nothing we can do about it until it attacks again."