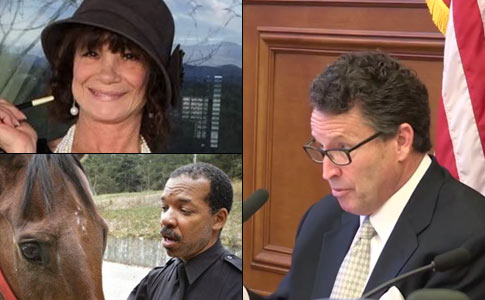 A new page dedicated to vicious and dangerous dog hearings at DogsBite.org.

Vicious Dog Hearings
DogsBite.org - We recently launched a new page within the Dangerous Dog section of our website: Dangerous Dog Hearings. The page highlights six hearings captured on video or audio, along with the second installment in a series of videos about San Francisco Animal Care and Control, which examines the city's Vicious and Dangerous Dog hearings. Most of the hearings listed on the page are from California, where audio recordings are part of the public record.

In many parts of the U.S., the steps to pursue a hearing are fraught with legal requirements or are derailed due to the failure of animal control departments to investigate cases that warrant a dangerous declaration (See a sizzling audit of Orange County, FL). We know that Los Angeles holds about 600 dangerous dog hearings annually (pop. 4 million), San Francisco 150 hearings (pop. 884k) and New York City (pop. 8.6 million) holds less than one OATH hearing per year.1

You will hear raw emotions from victims in these hearings and feel their pain. You will also hear "absurd" excuses by the owner's of vicious dogs.

Our goal in creating this page is to show dog attack victims what often occurs at an administrative dangerous dog hearing, also referred to as "Dog Court." You may face a neutral hearing officer, as was the case for Lana Bergman's family, or a biased one, such as former San Francisco hearing officer Jeff Foster, who was called out on the record. Both safety advocates and attorneys representing the owners of vicious dogs have called it "Kangaroo Court" in various jurisdictions.

"These hearings do not award any money for damages or cost. That is for an actual court to adjudicate. And while they can offer victims some sense of justice, their real purpose is to protect the public against future attacks from dogs known to be potentially dangerous," states the second installment about San Francisco. Evidence at these hearings can include: animal control reports; victim, witness and officer testimony; photographs; and medical records of the victim's injuries.

In July, we obtained the audio of the Vicious Animal determination hearing involving the pit bulls that killed Lana Bergman. This is the only hearing where we provide an introduction. During the May 15 hearing, the San Bernardino County Animal Services officer reads his investigation report. This is the first time Lana's family has received "detailed" information about her case since her death on January 16. The hearing is 24 minutes long. We highly recommend listening to it in full.

Also in May, a woman in San Francisco testified after a pit bull named "Joy" viciously attacked herself and her dog. "Joy" had previously been the subject of a hearing in August 2017 for a separate attack. Hearing officer Foster, who presided over the case, did not declare "Joy" vicious or dangerous afterward, as the complainant failed to appear and could not be questioned. On May 22, 2019, "Joy" escaped its owner's property again and attacked this woman and her dog.2

"I'm the neighbor and her friend … I've lived in the apartment building next door to that house for the last -- since 1994. I work nights. I was sleeping on the couch in my living room. I hear all these screams ... I get up. I look down. I can see directly down on top of her through my window.

Part of the hearing of "Tank" the pit bull was featured in the third installment in the series about San Francisco Animal Care and Control (SFACC). The hour and 17 minute hearing that resulted is unusual, as it was brought by SFACC on behalf of the dog, not the human victim. SFACC attempted to use the hearing to railroad Dan Perata Training with false testimony, a training facility that is a direct competitor to SFACC director Donohue's own dog training facility, Pet Camp.

The fourth featured hearing provides the powerful testimony of Officer Eric Evans. In the summer of 2012, Officer Evans was on patrol with his horse Stoney when a pit bull named "Charlie" charged and attacked them, taking both the horse and rider down. Stoney then fled with the pit bull in pursuit for 1.6 miles. The 23 minutes of testimony by Officer Evans is riveting. The "outcome" of the dog later evolved into a "Save Charlie" campaign and a sketchy fundraiser.

"Stoney is a thoroughbred racehorse off the track. He can run, but that's not what you do in defense. So I stood there. I held Stoney and when Charlie got to us, he stopped a short distance away, maybe six feet. Sniffed a couple of times, growled a couple of times, and I thought okay, it's not going to be that bad..."

"He ended up on the left side of Stoney and bit Stoney on the front leg and locked on. Stoney reared up. Now I'm holding on for dear life, obviously. As he's rearing up with the dog, with the pit bull hanging from his leg and me trying to stay on, and he's trying to get his balance -- we all go down. I land headfirst." - U.S. Park Police Officer Eric Evans

The remaining two featured hearings are appeals involving defense attorneys. One sees right away how their presence alters the spirit of these hearings. In the case of "Archi," an unaltered Dogo argentino that brutally attacked a jogger in Los Angeles, a panel of commissioners hears the case, not a single hearing officer. The commissioners warn the defense attorney a number of times, "You are not helping your case." At 24 minutes in length, it's swift and professional.

The last hearing is the most disturbing. We reduced its three hour length down to closing arguments (30 minutes). The hearing is more formal with a prosecutor and a defense attorney, but only plastic tables and fold up chairs are in the room. The hearing is held in Miami after three family dogs brutally killed 91-year old Carmen Reigada in 2015. The dogs "defleshed" her face and scalp. Her great-grandson pursued the hearing to keep two of the fatal attackers alive.

There are dozens of indeterminable crime scene photos on the tables. This was a gruesome fatality that began as a homicide investigation. Under this setting, the defense tears into a "lack of evidence" gathered by the county and argues that two of the dogs only inflicted "superficial" bites and should be returned to his client. Miami-Dade County, however, did not have to prove which of the dogs did the "most" damage. They only had to prove that all three dogs inflicted bites.

After surviving a vicious dog attack, most victims are shocked to learn, "You mean the city does not automatically put the attacking dog down?" No. While due process dictates an appeal process, depending upon your state law, such appeals can go on for years. Worse, some victims are never even told how to initiate a dangerous dog investigation after an attack or if the dog had a history of previous attacks. It's up to the victim to obtain that information through a formal FOIA request.

Finally, these hearings are often emotional and compelling, even with the predictable testimony that comes from the dog's owner. "He's always been a good doggie. He's gentle with kids." A fair amount of victim blaming is done as well. In the Dogo case, the defense attorney claimed the jogger was doing "martial arts" down the street. "Had it not been for the karate kicks, punches and aggression," the dog would have never jumped out of the yard, the defense brazenly argued. 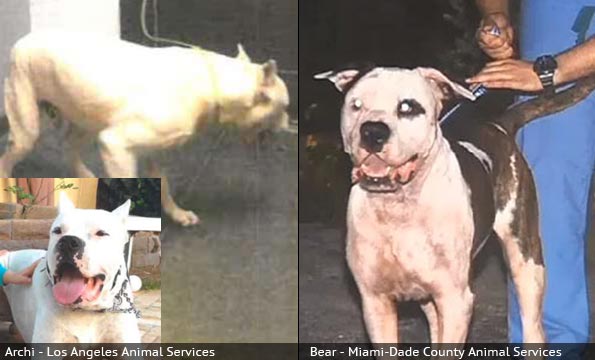 The Dogo argentino "Archi" and American bulldog-mix "Bear" were ordered to be euthanized.

9 thoughts on “New Page Launch: A Collection of Vicious and Dangerous Dog Hearings Containing Audio and Video at DogsBite.org”