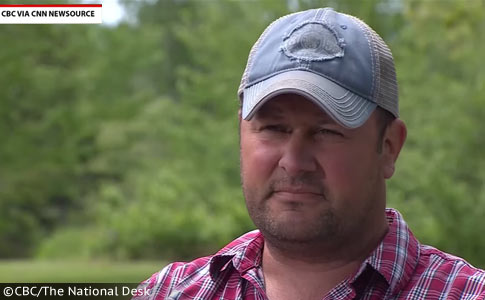 Mark Taylor ran over a dangerous pit bull after it killed its owner in Nova Scotia.

Mega Built Bullies
UPDATE 06/30/20: On June 30, 2020, a commenter left a link showing when Megan Milner purchased her two pit bulls -- less than four years later, one brutally kills her while she was taking it for a walk. On November 8, 2016, Mega Built Bullies, a British Columbia-based breeder of "exotic" pit bulls (American bullies), congratulated Megan on her two newest "MBB family members" from a Tonka and Camo litter. The designer pit bulls were a sister and brother pair.

In October 2016, Mega Built Bullies stated on their website, "Welcome to the Home of Mega-Freak-A-Bulls." There is no mistake what Megan had been seeking, two extra large mega-freak pit bulls that we often refer to as "mutants." At that time, MBB Tonka was advertised on the stud page, and the breeding of Tonka and Camo was advertised on the breeding page. This breeding pair session produced one fatally attacking pit bull and one aggressive pit bull in the same litter.

The dogs were at least 4 months old when Megan bought them, indicating that one or both might have been returned to MBB beforehand for behavior issues. The littermates also had to be sold as a "pair."

Does everyone understand that MBB is breeding for size, not temperament or health? MBB is breeding for extra large heads, heavy bones and over 100 pounds in weight. That is all they are selecting for too. Megan seems aware of this and states in a post left at MBB on March 22, 2017: "Kaos, AKA Tonka Jr. 8 months old. Starting to grow a big head, just like I told him his one job is." In a nutshell, that sums up the problem with designer (exotic, extreme, etc) pit bull breeders.

We also noted among MBB's dogs that UKC's Most Wanted Kimbo is in the second generation of MBB Jesus. Back in 2014, one of Kimbo's offspring, Niko, destroyed a 4-year old girl in Louisiana. Afterward, Kimbo's owner, a California breeder named Gustavo Castro, came under fire because Kimbo was widely known to "throw" (pass down) human aggression to his offspring. Castro ignored this and continued breeding Kimbo, just like MBB will continue breeding Tonka and Camo.

Megan's dogs were XL pit bulls, also know as the American bully. Though recognized by the UKC in 2013, the AB was "developed as a natural extension of the American pit bull terrier." It can be an infusion of at least 7 different breeds: American Staffordshire terrier, American pit bull terrier, American bulldog, English bulldog, Olde English bulldogge, Staffordshire bull terrier and French bulldog (See: related post). They come in four separate "varieties" separated by height only. 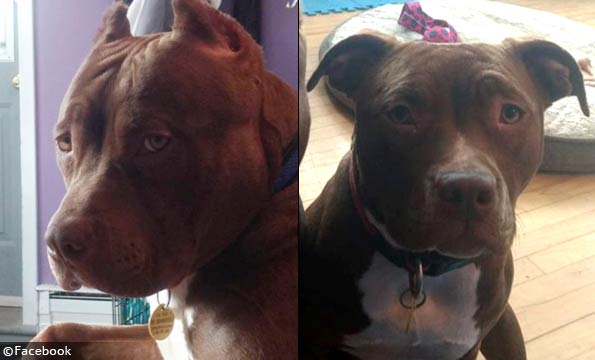 Megan Milner purchased her pit bulls from Mega Built Bullies in 2016. In 2020, one killed her. 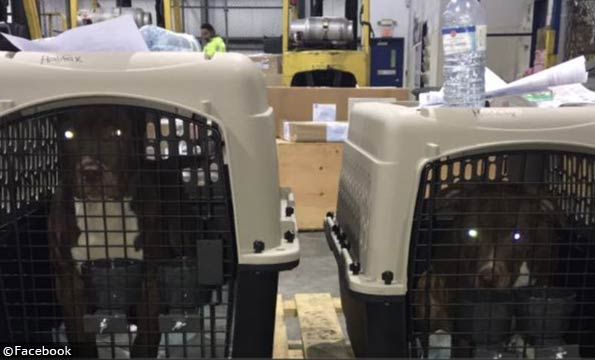 The pit bull littermates were at least 4 months old when they were shipped to Nova Scotia.

06/13/20: Mauling Victim Identified
The 38-year old woman mauled to death by her alleged "mild mannered" pit bull near Halifax has been identified as Megan Milner. Her last public Facebook post was on June 5. She was found dead in a ditch on June 9 on a rural road in Middle Musquodoboit, Nova Scotia. She had taken one of her two pit bulls for a walk outside of the village. A muzzle was also found at the scene. Mark Taylor, who lived near the attack site, later struck and killed the pit bull with his vehicle.

Just a few weeks before the vicious attack, Milner posted a photograph of her two pit bulls near a vase of flowers. Recently, Bronwynne Conrad Martin, a friend of Milner, claimed to know what Milner would want following her death. "Megan would not want an entire breed to be condemned from this tragic event," Martin wrote. But Martin does not know this -- no one does. Just like no one knows what Darla Napora would have opined about pit bulls after being killed by her own.

"Sorry for your loss, but please don't speak for the dead. Everyone loves their pits until it kills them, literally." - Commenter Ezekiel Roberts

Martin also claimed that people should, "Challenge the conversation with facts." In this case, the facts are clear. Milner was killed by one of her pit bulls, while taking the dog for a walk. Milner was a conscientious owner who would only walk her dogs one at a time outside of the village, and while armed with a sturdy muzzle. On June 9, one of her pit bulls brutally attacked her and left her dead in a ditch. Those are the grim facts, according to the Royal Canadian Mounted Police.

Like the attractive female pit bull advocates before Milner, who were killed by their own pit bulls (Darla Napora, Bethany Stephens and more), gross speculation and conspiracy theories fueled by pit bull advocates has followed. Claims like, Milner must have been "struck by a car" or "she was killed by a bear." There is a reason why jurisdictions in 53 countries regulate this dog breed. The routine horrific injuries pit bulls inflict, including deglovings, have no place in a civilized society. 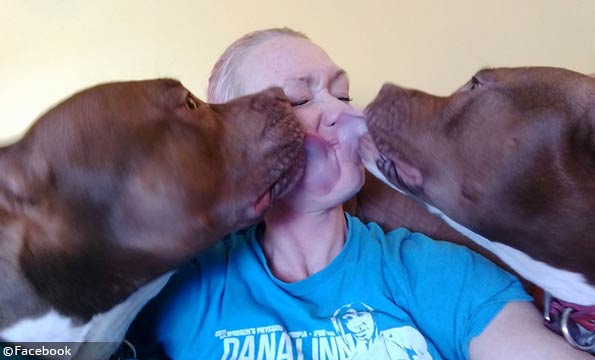 Megan Milner, 38-years old, was mauled to death by one of these two pit bulls in Nova Scotia.

06/10/20: Pit Bull Kills Female Owner
Nova Scotia, CA - On Tuesday, a 38-year old woman was mauled to death by one of her two pet pit bulls. Police were called to the scene on Wittenburg Road just after 8:00 am. About an hour-and-a-half later, the attacking pit bull was discovered dead after being run down by a vehicle. At the time of the deadly attack, the victim was taking one of her pit bulls for a walk. One neighbor expressed shock after learning which of the two pit bulls was responsible for inflicting her death.

But the victim's neighbor said he was shocked to find out which of the dogs was responsible for the woman's death. He said one of the pit bulls she owned, which was at the victim's home at the time of the incident, was known to be very aggressive and had attacked the owner last year. The other that turned on its owner was always mild-mannered and well behaved, he said.

"When I found out it was that dog I was shocked, I couldn't believe it," he said. The man said he witnessed the dog being taken from the woman's home by Animal Services on Tuesday afternoon. - The Chronicle Herald

According to the neighbor, he and several other community members saw the other pit bull pin her down before she escaped unharmed in the past. He said the victim adored her two pit bulls. "Those dogs were the focal point of her life," said the neighbor who did not want to be identified. "They meant so much to her," he added. "I think she really tried to help the problem dog become a better dog." Yet, it was not the problem pit bull that killed her. It was the "mild-mannered" one.

About 3 kilometers from the attack site, a driver intentionally struck and killed the dog to prevent further injuries. "I'm glad I came across the dog and took care of it because it really bothered me to think about what else could have happened to the people that didn't know this was going on, so I'm very thankful," Mark Taylor said. After his daughter alerted him to the attack, he jumped in his van and began telling people along the road about the attack. Eventually, he caught up to the dog.

He was headed down the road that leads to his livestock when he saw the dog. Taylor said he made a snap decision to hit the animal with his vehicle.

"It was very fast. I don't know how to describe it, it was surreal," he said. "I didn't concern myself with any repercussions. I took care of the dog."

Taylor, who describes himself as an animal lover, says it was a tough decision to make, but he believes it was the right one. - Mark Taylor, CTV News

Muzzle at the Scene

Video shows the Royal Canadian Mounted Police investigating the scene. A large leather dog muzzle can be seen. The National Desk also talked to Taylor, who again emphasized, "It was quick." A teenage jogger and a woman driving her vehicle discovered the victim in the ditch. The jogger had run by the victim and her dog earlier when she was alive. When she returned along her route, she encountered the loose pit bull and the victim dead in the ditch. The teenager called 911.

Police have not release the name of the victim. It is unknown if the dog was wearing the muzzle at the time of the attack. The fact that she had a serious muzzle -- not a flimsy nylon one -- indicates the "well-mannered" pit bull may have also been problematic. Community members said the victim would deliberately walk her dogs outside of town, to be away from residents, as was the case on the day of the attack. (We have never heard of a pit bull owner being this conscientious before.)

According to neighbors, the victim loved her pit bulls, and knew that at least one of them was aggressive. Notably, she only walked the dogs one at a time too. Residents told news outlets that she often walked her dog on the rural road and the dog was usually muzzled. The victim took precautions to keep her dogs away from the village population, only walked each dog alone, and was armed with a muzzle on her walks. Yet, her "well-mannered" pit bull fatally attacked her.

Statistical data from a 15-year period shows that pit bulls are over 11 times more likely to kill their owner than any other dog breed.

Pit bull owners routinely make devastating choices that result in people and pet dogs being severely mauled or killed. They make devastating choices that result in their own death too. There is no other dog breed that kills their owners more frequently than pit bulls. Over the 15-year period of 2005 to 2019, there were 75 owner-directed attacks that ended in death. Pit bulls were responsible for 63% (47). German shepherds, boxers and mastiffs followed, each with 4 deaths.

Very often, the extreme violence inflicted by pit bulls is unpredictable; there is no known stimuli beforehand. What is always true is that when stimuli is known before the attack, it is either minor (movement while sleeping, taking away a treat or a baby in a bouncy chair) or at worst, moderate (the clap of thunder or a domestic family dispute). Thus, the act of killing by pit bulls is always a disproportionate response. There is no appropriate context for these behaviors in normal life.

"It's also not realistic to pretend that impulsive aggression is not pathological. The environments (the fighting pit, the baited bull, the escaping slave) for which these behaviors were selected as an adaptive response are so extreme that in fact there is no appropriate context for these behaviors in normal life." - Animal behaviorist, Alexandra Semyonova 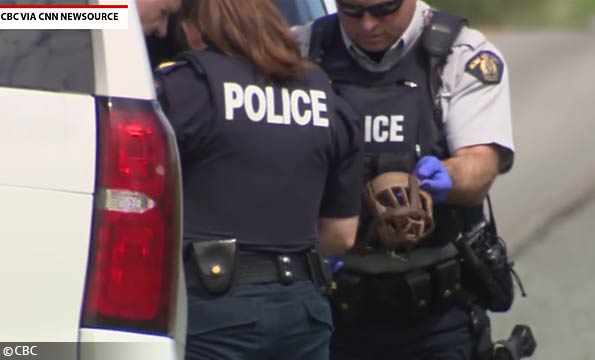 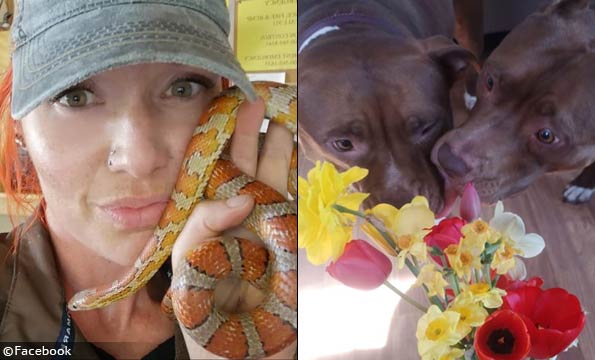 Images from Megan Milner's Facebook page. She was brutally killed by one of her pet pit bulls. 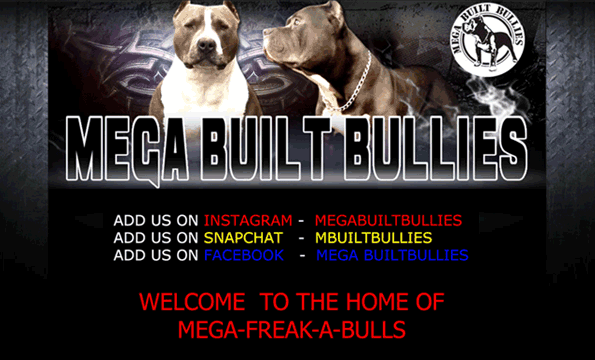 Related articles:
10/20/16: Back Story of the Montreal Pit Bull Ban; How the Pit Bull Lobby Operates
05/05/09: Alexandra Semyonova: Heritability of Behavior in the Abnormally Aggressive Dog