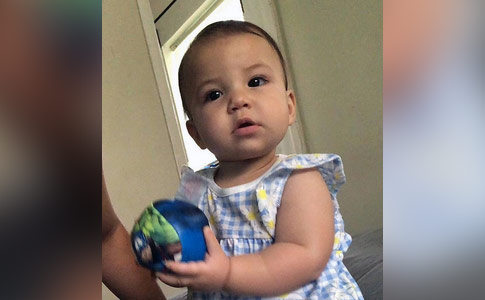 911 Call Released
UPDATE 06/07/18: On May 30, a baby was mauled to death by a family pit bull in the 2400 block of Kingston Drive. Liana Valino, 9-months old, was pronounced dead at the scene. Media footage showed an investigator removing the infant from the home wrapped in a red blanket. On Wednesday, the Broward County Medical Examiner’s Office ruled the death was accidental. The family had owned the pit bull for 3 or 4 years. The family also had two other pit bulls, both related.

Miramar police also released the 911 call made by the baby's grandmother. At the time of the attack, Liana was under her care. The grandmother told a Spanish-speaking 911 translator, “My son’s dog killed the 8-month-old girl,” she said. “I locked the dog in the bathroom and the baby is dead in the living room.” The dispatcher tells the grandmother that paramedics and police are on the way. The frantic grandmother responded, “The baby’s on the floor, dead, in the living room.”

The grandmother was babysitting the 9-month old in a household with three adult pit bulls that belonged to her son. What could go wrong?

Authorities confiscated all three pit bulls after the attack. None of which had a history of reported attacks in Broward County, according to Stefanie Chicko, assistant director of the county’s animal care division. As of Wednesday, the attacking dog was turned over to the county, reports the Sun Sentinel. It is unclear what occurred to the family's two remaining pit bulls -- neither of them participated in the attack. So far, the baby Liana's funeral fund has reached over $14,500.

Miramar Mayor Wayne Messam, who is currently looking into the city's reported dog bites and dangerous dog designations to evaluate if there is a problem, told the Sun Sentinel, “It’s just a heartbreaking story for any family to endure." Messam also addresses the fact that this baby was killed by a family pet and states, “it begs the question, would an ordinance have prevented what happened?” The only ordinance that could have prevented this deadly attack is a pit bull ban.

05/31/18: Pit Bulls Bring Tragedy
On Wednesday, a 9-month old baby girl was mauled to death by a family pit bull while under the care of her paternal grandmother in Miramar, Florida. Liana Valino was pronounced dead at the scene. The child's mother, Brenda Villasin, told reporters that her daughter lived with her, but she often dropped her off at her grandmother's home when she didn't attend daycare. The grandmother's household had three pit bulls, all related, a mother and her two adult offspring.

The culprit was one of the offspring, a male pit bull about 3 or 4 years old. Broward County Animal Control officers confiscated all three dogs.

The death of Liana falls under multiple attack scenarios that our nonprofit tracks. Liana was visiting her grandmother's home when she was killed by the pit bull. Liana was also under the care of her grandmother at the time -- the owner of the three pit bulls (technically) was away. From 2005 to 2017, 27% (116) of all dog bite fatality victims were either visiting or living temporarily with the dog's owner when the fatal attack occurred. Pit bulls inflicted 73% (85) of these deaths.

A statement by Miramar Police Officer Yessenia Diaz describes what happened: "The child was in a bedroom, in a bouncy chair, and the grandmother was with the child" when the dog attacked. What preceded this is less clear, though USA Today and Buzzfeed report the grandmother was bringing the pit bull back from a walk, when it overpowered her and "went directly into the room where the child was bouncing and attacked her." Buzzfeed attributed that statement to Diaz.

The family had raised the dog since it was a puppy. Of the 284 fatal attacks inflicted pit bulls from 2005 to 2017, 52% (149) involved killing a family or household member. Right now, two families after separate attacks are mourning the loss of a child after a family pit bull attack. Last week, 6-year old Gauge Eckenrode was killed by a "rescued pit bull" that had belonged to his family for several years. The boy's father could only stop the attack by stabbing the pit bull multiple times.

05/30/18: Multi-Pit Bull Household
A 9-month old baby girl is dead after being attacked by a family pit bull, police confirmed Wednesday afternoon. The baby was under the care of her grandmother at the time of the deadly attack. There were three dogs in the family's home -- all related. The attacker was a male pit bull, 3 to 4 years old and had been raised by the family since it was a puppy, Miramar Police Officer Yessenia Diaz said. The other two dogs were its sibling and their mother, both pit bulls.

Earlier today, police confirmed the baby was in a bouncy chair in a bedroom when the pit bull attacked her. The Sun Sentinel spoke to Alex Bernal, who is the landlord of the family's home on Kingston Drive. Bernal said they have been renting for about 18 months. "They are excellent tenants," Bernal said. Police are withholding the baby's name until relatives can be informed of her tragic death. "We want to respect their wishes, being that the child was so young," Diaz said.

"She was the best thing to ever happen to me," the baby's mother, Brenda Villasin, said. "We smiled every morning. She was my world."

However, the child's mother, Brenda Villasin, identified her daughter as Liana Villasin to the Miami-Herald and other news agencies. Villasin said she drops her daughter off at her grandmother's home every morning so that she can go to work. "Nobody wakes up in the morning and thinks they are going to lose the person they love," Villasin said. Yet, the infant's grandmother had multiple pit bulls in her home, a mother and its two offspring, which is a reckless "babysitting" environment.

After arriving at the scene, Villasin told Local 10 News, "I'm numb right now. I don't feel -- I can't express myself correctly. My emotions are all over the place." Part of this video footage shows an investigator from the medical examiner's office removing the infant from the home wrapped in a red blanket. The footage also shows a woman, presumably the grandmother, being escorted from the home by detectives. The Department of Children and Families is investigating the family. 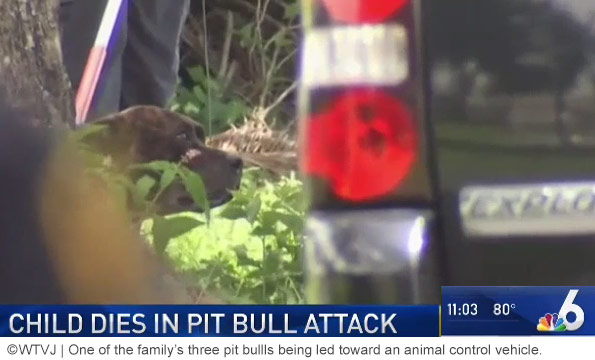 05/30/18: Family Dog Kills Baby
Miramar, FL - Miramar Police have confirmed that an 8-month old baby girl is dead after being attacked by a dog. Police responded to 2420 Kingston Drive about 11:30 am. At the time of the attack, the baby was under the care of a female relative, Miramar Police Officer Yessenia Diaz said. There were three dogs in the home (one large seen in video here). The breeds have not yet been identified. Broward County Medical Examiner’s Office investigators were at the scene.

Over the 13-year period of 2005 to 2017, 16% (68) of all dog bite fatalities involved a babysitter, grandparent or relative watching a child, or the dog being "watched" by a person other than its owner when the canine inflicted a deadly attack. Pit bulls carried out 74% (50) of these attacks. In the most recent fatality, the WSVN 7Skyforce chopper shows 32 minutes of raw footage of police and investigators at the scene, where the baby's home is taped off, and media crews setting up.

Miramar Police confirmed the attacking dog is a "spotted brown pit bull" the family has owned for 3 to 4 years. The infant was in a bouncy chair in a bedroom when the deadly attack occurred. The infant was under the care of her grandmother at the time, police said. The family had three dogs in their home on Kingston Drive. Police confirmed that the large dog seen in the backyard by the WSVN 7Skyforce chopper was not the attacker. This continues to be a developing news story.

Local 10 News reports that Broward County Animal Care and Adoption Division removed all three dogs from the family's home. "This child is only eight months old," Officer Yessenia Diaz told Local 10. "It is very difficult for the entire department and our heartfelt sympathy goes out to the entire family." This infant's death marks the fourth child, 13-months old or younger, killed by a canine this year. In three of these deaths, 75%, the baby was under the care of a babysitter at the time. 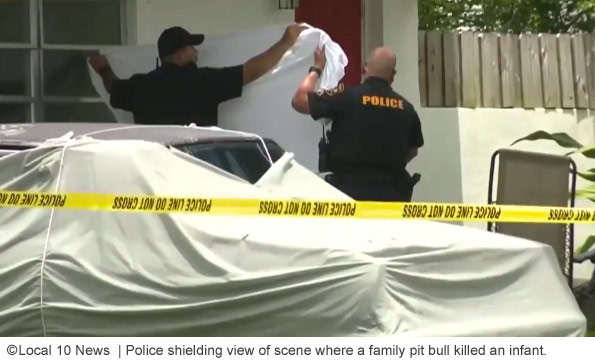 Baseline reporting requirements:
Law enforcement departments across the United States should release consistent "baseline" information to the media and the public after each fatal dog mauling, including these items.
Tweet
Share663
Tweet
Share663
Donate Now

6 thoughts on “2018 Dog Bite Fatality: Infant Killed by Family Pit Bull While Under Care of Grandmother in Miramar, Florida”