James Nevils III, 5-years old, was mauled to death by a pit bull in Chicago.

Case Closed
UPDATE 05/29/15: James Nevils III, 5-years old, and his sister, 7-years old, had been outside with the dog while visiting their cousin's South Carpenter Street home, according to a police report. When the mother let her children and the dog back into the home, and was locking the door, the dog latched onto the boy's neck. The mother tried to pull the animal off James then dragged both out onto the front lawn, hoping that neighbors would see the attack and help, according to police.

The mother and her two children had visited the home several times in the past. During the most recent visit, the three had been staying at the home for two days when the attack occurred, police said. The owner of the dog and boy's cousin, Kyle Hannah, was not home at the time of the deadly attack. Hannah had called, however, and asked the boy's mother to let the dog outside. What followed was a scene of bloody chaos as neighbors tried to free the boy from the pit bull's jaws.

05/27/15: Police Issue Two Infractions
The owner of the pit bull that savagely killed 5-year old James Nevils III late Memorial Day has been identified as 27-year old Kyle Hannah by CBS Chicago. The child's grandfather, James Nevils Sr., is appalled by the lack of any criminal charges. Police issued two administrative infractions to Hannah after his dog mauled the boy to death. "That’s all you get? My grandson’s gone forever, and all you get is two tickets? Yeah, I have a problem with that," Nevils Sr. said.

There will likely be no justice for little James, who is just one of hundreds of children killed by a family dog or while visiting the dog owner's home that go without criminal penalties. Many times there is no justice after a dog kills a person while off its owner's property too. In both cases, prosecutors usually have to prove the owner had knowledge of the dog's propensity to be vicious (a previous attack). Nevils Sr. hopes to raise funds so the family can pay for the boy's funeral.

05/26/15: Pit Bull Kills Visiting Child
Chicago, IL – A pit bull brutally killed a boy on the South Side on Memorial Day. Several witnesses intervened killing the dog, but it was too late. The Cook County Medical Examiner identified the victim as James Nevils III, of the 8200 block of South Escanaba Avenue. The boy was visiting the Auburn Gresham home on the 8900 block of South Carpenter Street when the dog latched onto his neck and shoulder, killing him. The boy was unresponsive when first responders arrived.

The lethal attack began inside the Carpenter Street home, according to neighbor Bianca White. “They were trying to drag the [the dog and boy] out of the house, I guess so people could help,” she said. Neighbor Marquis Lewis, 16, said he and his brother Le Mar, 19, started hitting the dog with a brick and a pole until the dog released the child. The teenage brothers beat the dog until it was dead, Lewis said. Neighbor Marco Clifton stabbed the dog with a pocketknife until it broke.

It had him around the neck, he wasn't letting go. He was just shaking him by his neck ... It was the scariest thing I ever seen. – Bianca White

The child was rushed to Advocate Christ Medical Center in Oak Lawn with "traumatic injuries" where he was pronounced dead, according to officials. The owner of the dog was reportedly not home when the attack occurred and returned only after the dog was dead and the boy was being transported to the hospital, Le Mar told ABC 7 News. An autopsy determined the boy died of multiple sharp and blunt force injuries to the head and neck. His death was ruled an accident.

WGN News reported that the dog belonged to the boy's adult cousin, the owner of the South Carpenter home. Neighbors told the Chicago Tribune that James, his sister and mother were visiting the home when the dog attacked. Police cited the dog's owner for failure to license and vaccinate the attacking dog. The owner's name has not been released. The boy's grandfather, James Nevils Sr., wants the owner of the dog to be held accountable -- fat chance in Chicago.

Why are pit bulls so disproportionately responsible for attacks resulting in death? Because of the manner of the breed's attack, described so aptly by witnesses below. Pit bulls often attack without provocation or warning and latch onto the victim's neck or head and shake the victim until he's dead -- the dog executes the killing bite the breed was selectively bred for centuries to perform. Moreover, the pit bull often does not cease its attack until it is dead. SOP in a fatal pit bull attack.

James W. Nevils III, 5-years old, is the 460th person in the U.S. fatally attacked by a pit bull.

Several witnesses intervened, eventually killing the pit bull that just wouldn't let go of the child ... A pit bull had grabbed hold of a little boy's neck and would not let go. "Boy 5, Mauled to Death by Dog in Gresham," ABC 7 News, May 26, 2015 (www.abc7chicago.com)

They saw the white pit bull with the boy in its jaw. Some of them ran to get objects to hit the dog, trying to force it to drop the boy. They say the dog would not let go and it was making vicious sounds...
"Police: Boy mauled to death by dog on South Side," Fox 32 News, May 26, 2015 (www.myfoxchicago.com)

"It had him around the neck, he wasn't letting go. He was just shaking him by his neck ... They finally got him off, and the boy was sitting there lifeless. ... It was the scariest thing I ever seen in my life." - Bianca White ... The entire time the dog had a firm grip on James' neck and would not let go ... "It was just horrible." - Brandon Lindsey ... Another neighbor said the dog briefly let go of James but then "went back and grabbed the little boy." - Unidentified neighbor. Lolly Bowean, "Grandfather of boy killed by dog: 'Person responsible should be made to pay'," Chicago Tribune, May 26, 2015 (www.chicagotribune.com)

"It locked onto the little boy and shook his neck." - Marquis Lewis ... "The stabbing didn't even stop the dog at all?" NBC Chicago asked Clifton. "No. I broke the knife." - Marco Clifton
Anita Selvaggio and Lauren Petty, "Boy, 5, Mauled to Death by Dog on Memorial Day," NBC Chicago, May 26, 2015 (www.nbcchicago.com)

Le Mar Lewis said the dog kept wouldn’t let go of the boy even though at least one neighbor was stabbing it with a knife - Le Mar Lewis. "Boy, 5, Mauled To Death By Dog," CBS Chicago, May 26, 2015 (chicago.cbslocal.com)

Five-year-old James Nevils was visiting a relative’s house Monday night, when the dog grabbed his throat and would not let go. "No charges for owner of dog that mauled, killed 5-year-old boy," WGN-TV, May 27, 2015 (www.wgntv.com) 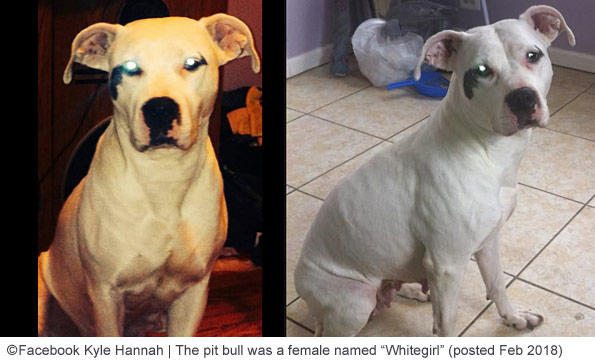