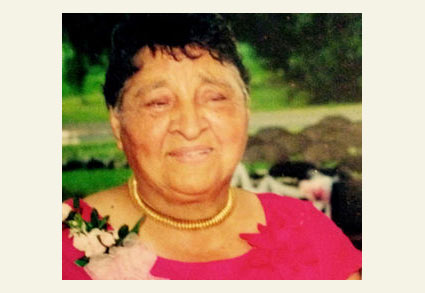 Alemeaner Dial, 83, died after being attacked by her granddaughter's pit bulls.

Dog Mauling Victim Dies archived
Rowland, NC - On October 25, 83-year old Alemeaner Dial suffered catastrophic injuries inflicted by four pit bulls belonging to her granddaughter. She had been sitting on her front porch when the dogs pulled her off and mauled her. She was taken to New Hanover Medical Center then airlifted to UNC Hospitals in Chapel Hill. Six days later, it was reported that Dial was taken off life support and near death. Family members confirmed today that she passed away late Sunday night.

The attacking pit bulls were two adults, a 3-year old male and 2-year old female, and two puppies, according to Robeson County Health Director Bill Smith. The attack occurred at Dial's home on Gaddy’s Mill Road last Saturday evening. She had been sitting on her porch when the dogs attacked her, Smith said. One of her grandson's was alerted to the attack and shot and killed one pit bull, the three others fled, but were later caught by animal control and euthanized, Smith said.

The pit bulls belonged to Dial's granddaughter. She and her dogs moved into Dial's home over the summer, according to Dial's daughter-in-law, Linda Dial. A neighbor called Linda and alerted her to the attack, she said. Linda's family rushed over to Dial's home, about a quarter of a mile away from their own. She said her son, Johnathan Dial, kicked the dogs off Dial and shot and killed one. Linda said the dogs ripped off her ears, tore out her hair and mutilated her arms and legs.

These are well thought of people. She doesn’t deserve this. Nobody deserves to be mutilated by dogs. - Linda Dial, Robesonian.com, October 30, 2014

The Robesonian.com reported additional details last week. Linda said that a nurse at New Hanover Medical Center, where Dial was initially transported, said that she'd never seen a patient in such condition. "She said they were not equipped to handle such a severe patient," Linda said. Alemeaner Dial was then airlifted to UNC Hospitals in Chapel Hill and placed on life support. "They’re telling us that if she survives she may lose all or some of her extremities," Linda said.

Linda had been concerned enough about these dogs to contact police and the Department of Social Services. Her mother-in-law had dementia and used a walker, according to Linda. "Nobody foresaw this, but everybody knew it was a dangerous situation," Linda said. After deputies and animal control arrived on scene, Linda confronted them, saying, "We’ve been trying to get you guys to do something for months." All county officials could say was, "We know, we’re so sorry."

According to Linda Dial, family members and neighbors had repeatedly asked that the dogs, which she said roamed in a large fenced in area, be restrained. She said the dogs were known to be vicious and had caused trouble in the neighborhood before.

“Nobody foresaw this, but everybody knew it was a dangerous situation,” Linda Dial said. “Everybody said ‘something has got to happen, we just hope they don’t bother Miss Dial.’” According to Linda, her mother-in-law has dementia and uses a walker.

Linda said the family had called police and the Department of Social Services trying to get someone to intervene. She brought this up when sheriff’s deputies and animal control officers arrived.

“We told them we’ve been trying to get you guys to do something for months and they said ‘we know, we’re so sorry, we’re so sorry,” she said. - Robesonian.com, October 30, 2014

"We're So Sorry" Is Not Good Enough

In yet another animal control and county policy fail resulting in a preventable fatal dog attack, one has to wonder how many more people have to suffer a barbaric "mutilation" dog mauling death before "reasonable" change is implemented? This is the 21st Century, not the Medieval period. Considerable blame must be pinned on the victim's granddaughter as well, who did not just own a couple of pit bulls, but was running a homespun pit bull breeding operation out of Dial's home.

In 2012, there was another fatal pit bull attack in Robeson County. 53-year old Mary Jo Hunt was mauled to death by seven rescued pit bulls at a home she shared with her sister on Sharon Lane. At the time of the attack, Hunt worked for Robeson County
Claws and Paws Rescue. All of the pit bulls involved in the fatal attack had been up for adoption through the rescue. Sheriff's authorities said the victim was trying to break up a dog fight when the dogs turned on her and attacked.

One of four pit bulls owned by Lydia Hoyes that horrifically attacked and killed Alemeaner Dial. 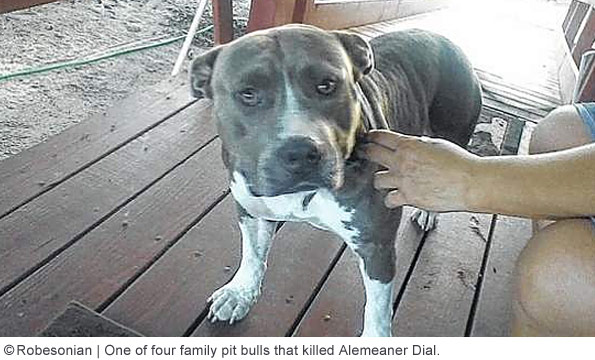