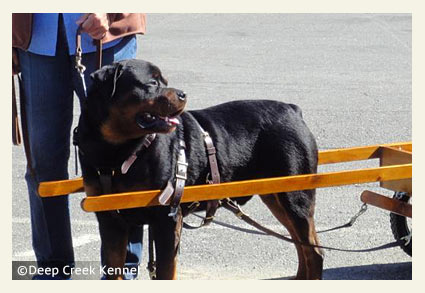 Details Released archived
UPDATE 12/05/12: The Yadkin County Sherifff's Office has finally released details about the mauling death of Dixie Jennings. The child was killed on November 9 at 11:30 am at Deep Creek Kennel in Yadkinville, which is owned by the infant's grandmother, Robin Jennings. The infant's mother Sarah Jennings also works at the kennel and was with her child in the office area when a customer came in with a dog to board -- a door separates the office and kennel areas.

Sarah Jennings took the dog and its owner into the kennel area, but the door behind her failed to latch properly. A rottweiler belonging to Robin Jennings subsequently pushed through the door and entered into the office where the child was located. When Sarah and Robin came back into the office, they found the rottweiler standing beside the bitten child. Sarah Jennings rushed her daughter to Hoots Memorial Hospital in Yadkinville. The baby did not survive her injuries.

Despite an earlier report that suggested the rottweiler was killed on the kennel property quickly following the incident, Robin Jennings took her dog to a local veterinarian and had the dog euthanized, according to Sheriff Ricky Oliver. After the investigation into the child's death was completed, Yadkin County prosecutors reviewed the findings. The investigation found no evidence of negligence or criminal wrongdoing. No charges will be filed in the death of Dixie Jennings.

11/20/12:
Dog Dead on Arrival archived
Rumors about the death of this young child keep brewing as the Yadkin County Sheriff's Department continues to withhold "standard" details about the attack to the public, now 11 days after the fatal dog biting incident. The most recent news (from last Wednesday) came after the Winston-Salem Journal reported that Anna Hamby, the county's animal control director, said that the AC officer arrived on scene and met the dog owner whose animal was "deceased."

Hamby told the Journal she did not know how the dog died.

At least 3 of these 4 North Carolina fatal dog maulings involved a pit bull.

11/13/12: No Dog Breed Named archived
Yadkinville, NC - In a developing story, a 3-month old girl from Yadkin County was killed Friday after a family dog bit her multiple times in the head. Dr. Donald Jason, the Forsyth County medical examiner, said Dixie Jennings died from head and brain injuries due to dog bites. Jason also speculated that the dog might have mistaken the child's "multicolored knit cap" on her head for a ball. Yadkin County Sheriff Ricky Oliver declined to provide any details of the fatal incident.

Oliver also would not say whether the dog was euthanized. He declined to release the incident report to a Winston-Salem Journal reporter late Tuesday. Oliver told a reporter that he wanted to protect the family.
There is no N.C. statute that protects public documents related to accidents or the names of victims or witnesses from being accessible to the public, according to N.C. Press Association general counsel Amanda Martin. Only information related to criminal investigations can be withheld in certain circumstances, she said.
The Journal has received numerous calls from Yadkin County residents who had heard rumors about the death since Friday and were concerned that they were getting no information on the dog attack in their area. (Michael Hewlett and Jennifer Young, Winston-Salem Journal)

This is a United States fatal dog mauling and protocol violations may be at hand. Journalists Hewlett and Young also turned up Robin Jennings, who is related to Dixie Jennings, and owns Deep Creek Kennel. Jennings has been training and showing rottweilers for 28 years and is a former president of the Yadkin County Humane Society and animal-cruelty investigator, according to the kennel's website. Jennings declined comment to the Winston-Salem Journal.

Citing this was a "private family matter."

View the DogsBite.org Google Map: U.S. Fatal Rottweiler Attacks By State
1Presumably the "cart-puller" is a rottweiler named Atlas, as explained on the Deep Creek Kennel website. It is unknown if Atlas, also an AKC Champion, is the same rottweiler that killed the infant.
2California and Texas each have 3 fatalities thus far in 2012.