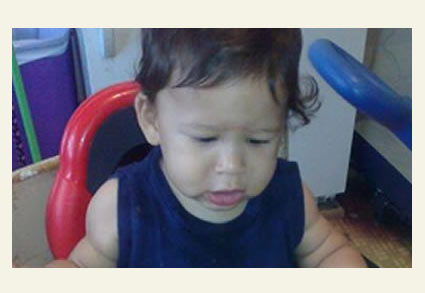 James Hudson, 10-months old, was mauled to death by a family pit bull-mix.

Dog Euthanized
UPDATE 09/14/12: The dog that attacked and killed 10-month old James Hudson has been euthanized. Hertford Police Chief Douglas Freeman Jr. told The Virginian-Pilot on Friday that he has concluded an investigation into the boy's death and plans to meet with District Attorney Frank Parrish on Monday to determine whether to press charges. Freeman also added that despite conflicting reports, he and others he has consulted believe the dog was a pit bull-mix.

Hertford Police Chief Douglas Freeman Jr. said Friday that he has concluded an investigation into the incident and plans to meet with District Attorney Frank Parrish on Monday to determine whether to press charges.

The dog, believed to be a pit bull mix, attacked James Hudson just after 6 p.m. in his home on West Railroad Avenue. The family owned the dog. The baby's grandmother Terry Atkinsson was at the home with other children at the time of the attack. - Virginian-Pilot

09/12/12: More Information
WAVY.com reports that Hertford police officers were dispatched to the home on West Railroad Street Tuesday evening after a report of a child not breathing due to an animal bite. 10-month old James Hudson was taken to Albemarle Hospital in Elizabeth City where he later died from his injuries. According to Hertford Police Chief Douglas Freeman, Jr., the initial investigation shows the family's pit bull-mix attacked the child while under the care of the baby's grandmother.

The family dog, named Copper, attacked the baby while he was playing on the bed, according to the child's grandfather who was outside at the time of the incident. He said his wife tried to restrain the dog, but could not. The dog is currently being held at the Tri-County Animal Shelter. Employees at the shelter told WAVY.com that the dog was not a pit bull, but a "labrador-American bulldog mix" -- It is unclear where the original source of the breed mislabeling stems.1

An article from the Virginian-Pilot identifies the grandmother as Terry Atkinsson. The dog had previously bitten an older boy in the home in a separate incident. James Thatch who lives and works in the neighborhood said he knows the family and the dog. No long ago, Thatch was mowing the grass at a house next door when the dog pulled at its leash aggressively trying to get at him. "The woman [the child's mother] was barely able to hold him back," Thatch said.

09/12/12: Confirmation of Death
WVEC.com confirms that a 10-month old child was attacked and killed by a family pit bull-mix dog while under the care of his grandmother at her home on West Railroad Street. The grandmother was also bitten during the attack trying to save the child. Local and county authorities continue their investigation. Findings of the investigation will be turned over to the Perquimans County Department of Social Services and the District Attorney's office for possible further action.

09/12/12: Child Killed by Dog
Hertford, NC - In a developing story, The Daily Advance, a "walled off" newspaper, reports that a 10-month old boy was killed Tuesday when a pit bull attacked him while under the care of his grandmother. DogsBite.org will be watching for additional new stories, as sending users to this type publication lies outside of our mission of a public education website. Persons with additional information in the Hertford area, please send email to info --at-- dogsbite.org.

View the DogsBite.org Google Map: North Carolina Fatal Pit Bull Maulings.
1Though it seems to be Tri-County Animal Shelter Director Dana Goheen. The Daily Advance reports that Goheen became the director in June of this year.