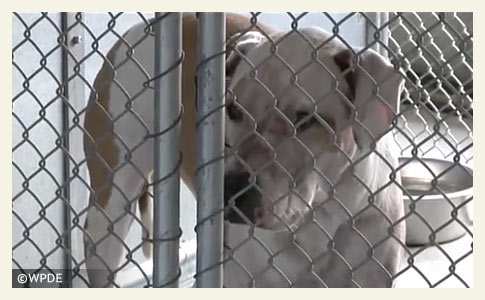 Mary Jo Hunt was mauled to death by a pack of her own rescue dogs in Pembroke.

Claws and Paws Rescue
UPDATE 10/04/12: Several issues are clarified in the FayObserver.com article today. Mary Jo Hunt of 17 Sharon Lane in Pembroke lived with her sister Deborah Jacobs, according to a neighbor who would not provide his name. Both women worked for the Robeson County Claws and Paws Rescue. Glenna Hicks, the chairwoman of the rescue's board, said all of the seized dogs had been up for adoption through the rescue. Hicks expects the dogs to be put down.

A neighbor, who would not give his name, said Hunt lived at the home with her sister, Deborah Jacobs.

Both were animal lovers and worked for the Robeson County Claws and Paws Rescue, said Glenna Hicks, chairwoman of the rescue's board.

Hicks said she did not know Hunt well, but "she was a good person."
Hicks said about nine dogs, mostly pit bulls, were taken from the home.
The dogs were seized by Robeson County Animal Control, whose officers were assisted by Maxton,

Pembroke and Lumberton animal control officers, Sealey said.
The dogs had been up for adoption through the rescue, Hicks said. - Fay Observer, October 4, 2012

10/03/12: Rescue Pit Bulls Killed
Nine dogs were seized from the victim's home on Sharon Lane, according to Robeson County Sheriff Kenneth Sealey. He identified the victim as Mary Jo Hunt, a mother of three who worked with a rescue group called Claws and Paws Rescue. Hunt had about 10-15 dogs in the fenced-in backyard of her home, all of which were rescued, Sheriff Sealey said. "Some of the dogs were ones she rescued off the street," he said. "She had been rescuing dogs for a number of years."

Sealey said a neighbor called 911 at about 12:30 p.m. concerning the attack. When deputies arrived, Hunt was still being attacked. The deputies were able to remove the dogs from the woman, but she was already dead, according to Sealey.

“The deputies were the first ones on the scene,” he said.
Hunt lived with a sister, but she was at work at the time, Sealey said. Hunt had worked with attorney Hugh Rogers at his law firm on and off for about 15 years.

“She was a good-hearted person and a hardworking employee,” Rogers said. “I think it’s a terrible, tragic thing.”

Hunt was a widow and had two sons and a daughter.

Sealey said that Hunt was trying to protect a small dog from the larger dogs by using a rake. She was then attacked and knocked down by the larger dogs and mauled. - The Robesonian

Bill Smith, Director of the Robeson County Health Department, said the seven pit bulls that attacked Hunt are being held at the Robeson County Animal Shelter. Two terriers believed to have been attacked by the pit bulls are at the shelter as well. Another pit bull, also attacked, was taken to a veterinarian. Smith does not believe any of the dogs that were part of the fatal pack attack came from the county shelter. The shelter is holding the dogs until the investigation is complete.

10/02/12: Woman Killed by Own Dogs
Pembroke, NC - In a developing story, another woman who "rescues" dogs1 has been attacked and killed by her own dogs. Robeson County Sheriff Ken Sealey said they responded to a home on Sharon Lane after they received a 911 call about a woman being attacked. Sealey said the victim was "mangled and her clothes torn off" after attempting to stop a fight between her dogs. Police found the victim lying dead on the ground near the gate of her fenced-in backyard.

Sealey said it appeared the dogs were in the yard when "several large dogs attacked a smaller one." The woman apparently tried to stop the fight using a rake, but the animals overpowered her. Sealey did not provide information about the number of dogs involved or the breed-types. It is also unclear who called 911 and who witnessed the attack. Animal control officials from four jurisdictions responded, including: Robeson County, Maxton, Lumberton and Pembroke. 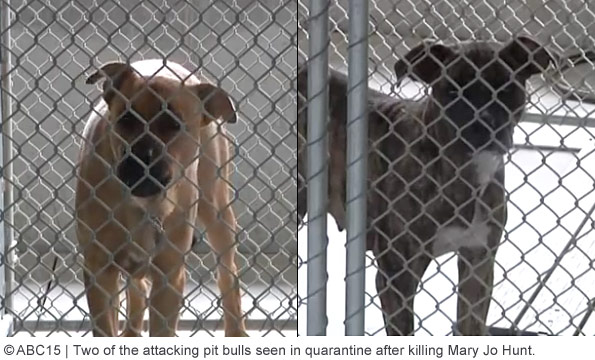 1There are conflicting reports about the victim being a dog rescuer and "staying at the home" of a dog rescuer.