A Primer on State Preemption Laws and Charts for Advocates 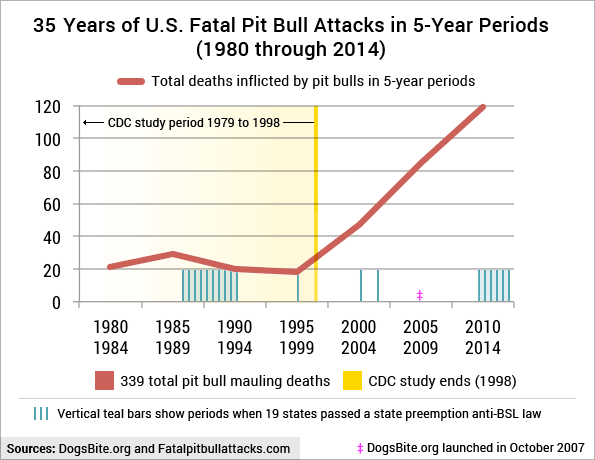 DogsBite.org - During the first quarter of the 2015 legislative season, state preemption bills prohibiting local governments from enacting breed-specific laws were brought in five states: Arizona, Georgia, Kentucky, Montana and Washington. In all five states the legislation failed.1 This is a 100% success rate for cities and counties retaining local control and a 0% success rate for the chief pushers of these bills, Utah-based fighting dog advocates, Best Friends Animal Society.

That is the bright news; the dark news is the 35-year death chart. Deaths inflicted by pit bulls have increased by 560% since the 5-year period of 1995 through 1999, which includes the last four years of the CDC study. The CDC has no plans to revisit this issue either. On top of this, a second wave of state preemption bills erupted in 2012. Why any state legislator today would prohibit local governments from regulating this well-recognized dangerous dog breed is frankly inexplicable.

State preemption laws backed by big industry interests are not new. Such laws were historically pursued by the tobacco industry, and continue to be today, to impede local tobacco laws. This strategy by the tobacco lobby was so successful that a range of other big industries began pursuing state preemption laws as well. Grassroots public health movements often suffer the most, as these laws essentially extinguish the motivation to organize and take action locally.

[I]f you take away the ability of people to make policies, to create rules at the local level, then there's far less incentive for people to organize and act because they don't have an opportunity to take action at the local level. That strategy is ... something that can take the wind out of the sails very quickly. - PMB, Key Informant Interviews 2010 | Public Health Law Center2

Wave I of state preemption laws prohibiting the regulation of dangerous dog breeds occurred just after 1987 when the pit bull mauling epidemic exploded across America, dominating local and national news publications and television news coverage. By 1992, dogfighting and dog breeder interests had pushed through preemption laws in ten states, including three of the most populous, California, Florida and Texas, in an effort to stop local jurisdictions from adopting pit bull laws.3

Between 1997 and 2004, three more states passed these laws. Wave II officially began in 2012, chiefly driven by Best Friends and dog breeder interests.4 From 2012 to 2014 six new states passed state-level bills barring local governments from regulating specific dog breeds. Today, there are 19 states with these types of state preemption laws. Jurisdictions in at least one state, Colorado, can supersede the preemption law under home rule authority, effectively muting it.5

In addition to home rule authority variances amongst states, state preemption laws vary as well. Primarily they center upon the prohibition of declaring a specific breed "dangerous" or "vicious" (prima facie legal designation). California, which has a mixed preemption law, explicitly allows for the regulation of specific breeds via spay, neuter status -- mandatory pit bull sterilization laws are legal -- but does not allow specific breeds to be declared "potentially dangerous" or "vicious."

The question lingers, what prompted Wave II? The radically rising number of deaths inflicted by pit bulls is a logical guess. Along with a rising number of voters who do not want a pit bull living next door. It is much easier for the pit bull lobby to fight one state-level battle than to fight many local ones, a page out of the tobacco lobby's handbook.6 Also, state preemption laws pushed by big industries to squelch health and safety grassroots movements are "trending" again in general.7

Despite 19 states passing these preemption laws, currently over 850 jurisdictions across 37 states in this country regulate pit bulls. On a federal level, all three major military divisions, the U.S. Army, U.S. Marine Corps and U.S. Air Force, outright ban these dogs and several other breeds on base and privatized housing. Federal and state housing authorities typically ban this same small group of dangerous dog breeds too. Even a large number of Indian reservations have followed suit.

DogsBite.org had its hands full after the 2012 Solesky decision and the ensuing four legislative sessions spent defending the Court of Appeals decision. This lasted until March 2014, well into the second wave. However, 2014 is also the first year our nonprofit and a grassroots effort to fend off these state laws gained traction. Preemption laws were brought in six states in 2014 and just two passed, a 33% pass rate. One of the passing states was Utah, the home base of Best Friends.8

Victories in Missouri and Washington last year, and a growing number of advocates engaging in letter writing campaigns to state legislators, evolved into an even stronger effort during the first quarter of 2015, likely helping to tip the scale to a 100% victory. The real powerhouses, however, are the municipal associations that fight at a state-level to protect cities and counties from losing local control in a range of areas. Once that area of local control is gone, it's usually gone for good.

Since the passage of the first state preemption law in 1988, barring breed-specific ordinances, not a single state has managed to repeal one.

In addition to municipal associations, other state-based groups, our nonprofit and a grassroots campaign fighting these state preemption bills, we believe that some state legislators are growing tired of the "breed controversy." Many legislators do not like hot potato issues that light up their phones and stem from out-of-state special interest groups. At least momentarily, 2015's current 100% victory record for municipalities retaining local control has thrown a wrench into Wave II.9

We expect four of these bills to return in 2016. Some may emerge in other states as well. It is not costly for Best Friends or dog breeder interests to get these bills introduced, often they are only one or two sentences long. But trying to pass them through both chambers can become expensive by hiring more lobbyists, local recruiting and more. Like the tobacco lobby, we expect these groups to be relentless in bringing these preemption bills in the coming years, until Wave II officially dies.

Summary and Call to Action

Despite our health and safety cause lacking lobbyists and formal legislative organization -- which is directly opposite from Best Friends and dog breeder interests who have both -- our vital cause has so far been successful in 2015. Fighting these state preemption bills is not a sprint. Wave I lasted five years. It is unknown how long Wave II will last. We created the charts and information in this post to provide advocates with more materials when communicating with state legislators.

Together we can do this! Grassroots health and safety advocates powerfully impacted first quarter's successful results, as well as in 2014. Our freight train is starting to roll and we need you on board! Understanding state preemption laws -- who typically brings them and who is typically harmed -- is the first step in coming on board. Advocates are now also armed with the powerful 35-year death chart that sends a concrete message to legislators considering one of these bills. 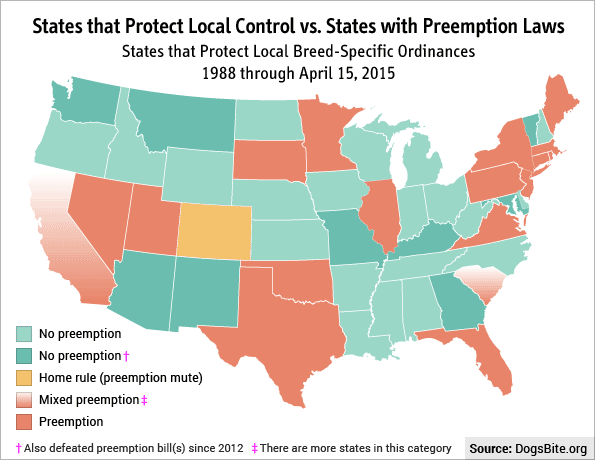 This post originally stated that 1982 was the first year a state passed this type of preemption law based upon reviewing Pennsylvania's 1982 Act 225. Upon closer examination of the 1982 Act, just after releasing this post, we found that Section 507-A was added to the 1982 Act in May 1990, right in the heart of the Wave I.

1First quarter failed legislation: Arizona Senate Bill 1292; Georgia House Bill 124 and Senate Bill 184; Kentucky Senate Bill 124; Montana Senate Bill 239 and Washington House Bill 1018.
2We strongly recommend that advocates read this brief overview, "Preemption in Public Health" and review this slideshow: Preemption
and the Public’s Health New Research, Practical Lessons, by Mark Pertschuk, JD. Public Health Law Center (www.publichealthlawcenter.org)
3Read more about this time period: Historical articles examining pit bulls and their victim | Watch related video
4Of course there are lobbyists from the AVMA, ASPCA, HSUS and other humane groups that support these laws, but these groups are typically not the bringers of Wave II state preemption bills. That role is reserved for the strange bedfellows of Best Friends, dog breeders (AKC) and hunting dog groups.
5Illinois and Rhode Island are also home rule states, but no municipality has ever challenged this legal angle like the city and county of Denver did.
6
"By introducing preemptive statewide legislation we can shift the battle away from the community level back to the state legislatures where we are on stronger ground." -Tina Walls, Philip Morris, July 8, 1994. (Preemption: Tobacco Control’s #1 Enemy). Here is another great read to help understand state preemption legislation and the usual forces behind it. The article also refers back to the infamous 1994 Phillip Morris quote: Big Food Strikes Back, Ag Industry Aims to Strip Local Control of Food Supplies, by Britt Bailey and Brian Tokar, CounterPunch, May 26, 2005 (www.counterpunch.org).
7Preemption Takes Center Stage in 2015, Grassroots Change, November 7, 2014 (grassrootschange.net) and States Are Blocking Local Regulations, Often at Industry’s Behest, by Shaila Dewan, New York Times, February 23, 2015 (www.nytimes.com)
8A no-brainer win.
9When we say momentarily, we mean it. Many state legislative sessions only last for the first 90 to 120 days of the year, but others last longer, even the full year. More of these state preemption bills are coming down the pike in 2015.
10After locating HB 751, we performed more searches on the legislature's website and found that HB 271, a separate state preemption bill, was also filed in North Carolina in mid March. The preemption clause is buried within HB 271, which overhauls the state's dangerous dog law. HB 271 modifies section: 67-4.5. Local ordinances (see existing wording). Underlined type shows the bill's "added" preemption language.