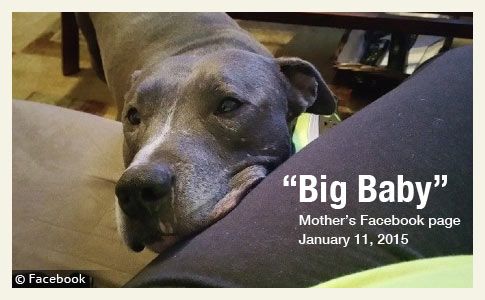 One of two consecutive posts published on the mother's Timeline in January 2015.

Images of the Dog
UPDATE 04/29/15: On the day this fatal pit bull attack was reported, we located the mother's Facebook page in Google Cache. At least temporarily after the baby's horrific death, it had been deactivated from Facebook. Upon checking again last night, the page had been reactivated. As recently as January 11, 2015, the mother posted two consecutive photographs to her Timeline of a male pit bull with a graying muzzle that she lovingly refers to as a "big baby" in both public posts.1

In the two posts, it appears she is referring to the 8-year old dog's tapering ability to hop up on the couch, "Well....he made it up here..."

The deceptive propaganda about the breed, "It's all how you raise them," promoted by pit bull owners, breeders, animal groups, television programs and more, is clearly evoked in these two photographs. This false narrative wholly denies the heritage of the breed, involving centuries of selection for bull baiting then dogfighting. The purposely-bred form and function of a fighting dog is to attack without warning signs, to execute the killing bite and to relentlessly attack until death.

The aging family pit bull that lumbered onto the couch in January, with no history of aggression, had no problem suddenly executing the killing bite a few months later. Latching on to the baby's head, killing it, was just part of the deadly attack. When the father succeeded in getting the dog to release the baby, the pit bull next attacked the mother who intervened. At some point, the father was able to drag the 8-year old pit bull outside where he shot it to death, ending the attack.

04/20/15: Family Pit Bull Kills Baby
Dallas, TX - Dallas police report that a 2-month old baby boy was mauled to death by his family's pit bull on Sunday afternoon. The deadly attack occurred in the Red Bird neighborhood on the 6800 block of Beechnut Street at about 5:00 pm. At the time of the attack, the boy and his father were alone at the home. The father had stepped outside to turn on the sprinkler system. When he returned, the pit bull was attacking the baby who was in a bouncing seat, according to police.

As the father tried to pull the dog off his baby boy, the mother arrived home and walked in on the fatal dog mauling scene and was bitten twice by the attacking animal. The father was eventually able to grab the family pit bull by the neck and tear it away from the boy and his mother. The father then dragged the animal outside and shot it twice, according to Dallas police. The 2-month old baby boy, Brayden Wilson, was transported to a local hospital, where he was pronounced dead.

CBS 11 News reported Monday that the family pit bull, named Grady, was 8-years old. The dog had been with the family for nearly a decade and had played with other children before. CBS spoke with the child's grandmother who said that family members are "in shock" that the pit bull would suddenly turn on the child. The grandmother also told CBS 11 that other children were at the home at the time of the savage attack, but were playing outside and did not see the violence.

“It’s just unexplainable. You just don’t get it when you’ve had the dog so long, I don’t know what could have happened. I don’t know." - Willetta Tate

Tate said the other children are 8 and 11 years old and had grown up with the dog. "Those kids, they sleep with him and everything," she said. A similar case occurred in 2013 in Georgia, when a family pit bull of 8-years, named Kissy Face, savagely killed a 2-year old boy. The female, spayed pit bull had known the boy since his birth and his older sister who was 6-years old when the attack occurred. The boy's mother, Angela Rutledge, later told her painful story to a state legislator.

The video shows Brayden's mother emotional after returning home from the hospital. "Like I said, kids play with him every day, littler kids, nieces and nephews and I just... I don’t know," Tate echoed. Then the video cuts to neighbor Chanel Villarreal who also owns a pit bull that she dragged for out the cameras. Because by all means, just after the violent mauling death of a baby by a family pit bull is certainly a ripe time to showcase anecdotal nonsense by a pit bull owner.

Child Protective Services interviewed the family twice. CPS has no prior history with the family.

1It is unknown how long the page was deactivated. On April 20, the Google Cache of the mother's page did not contain any posts, just the cover and profile images. By April 28, the page was active again with many public posts.