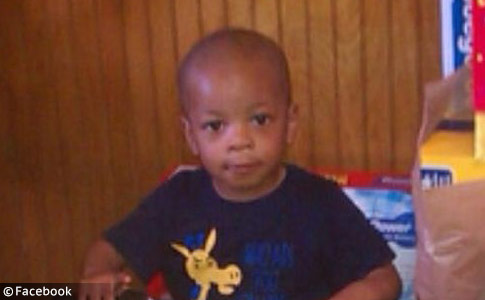 Father Speaks Out
UPDATE 05/23/13: The father of a young boy killed by a family pit bull issued a strong warning about the breed in a WSBTV interview. Back in April, Beau Rutledge, 2-years old, was savagely attacked by his family's pit bull named Kissy Face. The family had owned the dog for 8 years prior to the attack. The scene was so gruesome -- described as being in a horror film by a witness -- that authorities hung a sheet over the doorway of the family's home to keep the scene hidden.

"How do I go from a birth certificate to a death certificate? … Those dogs cannot be domesticated. They cannot." - Jeremiah Rutledge

Jeremiah Rutledge told WSBTV that his family has not returned to its Sierra Trail home since Beau was killed on April 24. Rutledge described the chaos of rushing home and trying to reach his son. "I was trying to get in. The cops, they were fighting me they were saying 'No,'" Rutledge said. Police used a Taser to subdue him. Police reported that they did so to protect the crime scene from being contaminated. Rutledge said that his faith is getting him through this difficult time.

The WSBTV interview also said that the pit bull has been put down. But beforehand, the animal underwent temperament testing for aggression. The tests came back negative.

04/26/13 Autopsy Results
The Fulton County Medical Examiner's Office confirmed that the young boy suffered sharp and blunt force trauma to the head and neck, consistent with a dog attack. Police confirmed that the boy's father was Tased at the scene (View: partial police report). Police said the father, overwhelmed with grief by the death of his son, was trying to enter the secured crime scene, the father's own home. Police said they had to protect the crime scene from being contaminated.

"This is one of those parts of the job we don't like doing. But we have to protect the crime scene until we know what has happened. We must look at all the possibilities. We can't contaminate the crime scene," McBride said.
"When you go hands-on, you never know what's going to happen. It's easy to poke an eye out or knock out a tooth accidentally," McBride said, justifying his officers' actions. "At the time, it seemed like the best way for our officers to handle it." (Sgt. Scott McBride)

A report from WSBTV yesterday said the name of the attacking pit bull is Kissy Face. On Wednesday, Kissy Face, after 8 years of living with the family, savagely attacked the family's 2-year old son, killing him. As police officers, emergency medical responders, animal control and news media teams swarmed the Wexford subdivision, the scene became "surreal" heightened by police Tasing and restraining a distraught father trying to reach his son's dead body.

04/25/13: Neighborhood Traumatized
The Atlanta Journal-Constitution (AJC) reports that the Fulton County Medical Examiner’s office identified the boy as Beau Rutledge. Over the course of Wednesday evening, news stories emerged detailing the deadly pit bull attack. WSB Radio reports that neighbors called the scene "surreal" and first responders simply said, "horrible." As seen in the AJC slideshow, a sheet was hung over the doorway of the family's home to shield the horrific dog mauling scene from view.

A detective told Channel 2's Craig Lucie that first responders told their colleagues not enter the home because it was "too gruesome." During Detective Melissa Parker's statements, concerning first responders, she said, "They were rattled when they came out from what they saw. Tears. Some in tears." Neighborhood children were crying and being comforted by adults as well. CBS Atlanta footage showed the child's father so upset that he had to be restrained by police.

The group also showed footage of two women who saw inside the family's home, "It was like a horror movie. It was like something I've never seen before," said one. "We're traumatized. The images are still in our minds." 11 Alive told the same story and added that neighborhood children watched as the medical examiner took the child's body away, watched as the mother was taken away in an ambulance and watched as animal control hauled away the family's pit bull.

A horrific fatal dog mauling, as what unfolded in this neighborhood, is often a multigenerational community trauma, particularly when young children are killed. Earlier news reports said that pit bulls are common in the neighborhood. These pit bull owners now must weigh all they have been led to believe about the breed versus what they just witnessed: A well raised pit bull that had been with the family for 8 years, and the child's whole life, suddenly savagely killed the child.

04/24/13: Family Pit Bull Kills
Fulton County police confirm that the dog involved in the most recent U.S. dog bite fatality is a pit bull. Police said a woman called 911 saying that a dog had attacked her 2-year old son. Investigators said the woman was home with her child and the dog at about 1:30 pm Wednesday. She said that when she stepped away to go to the restroom, "everything was okay." When she returned to the room, it was clear that the pit bull had attacked the child and killed him.

Detective Melissa Parker with the Fulton County Police Department said the dog had been part of the family for the past 8 years. The animal remained inside the home in a contained area for over an hour after the horrible attack. Joseph Messam, a neighbor, said heard the screams of the child's mother who ran outside of the home and was on the ground. Oliver Delk, administrator for Fulton County Animal Services said: "We don't know what made it attack the child as it did."

04/24/13: Child Killed by Dog
Fulton County, GA - In a developing story, Fulton County police report that a child is dead after being attacked by a dog. The attack happened on Sierra Trail in the Wexford subdivision. It is unclear who the dog belongs to, but neighbors told CBS Atlanta that the young child was attacked by the family pit bull. Neighbors also said the mother was present during the attack. The father was at work and rushed home. Neighbors said police had to use a Taser on the father. 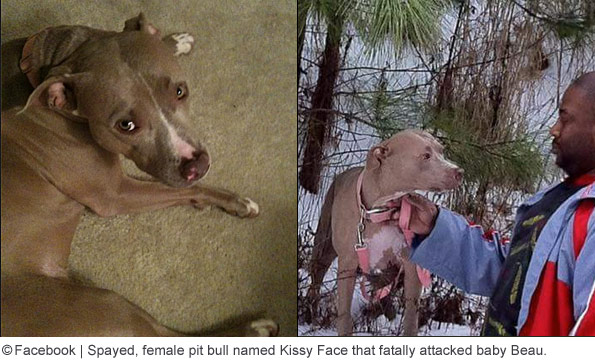