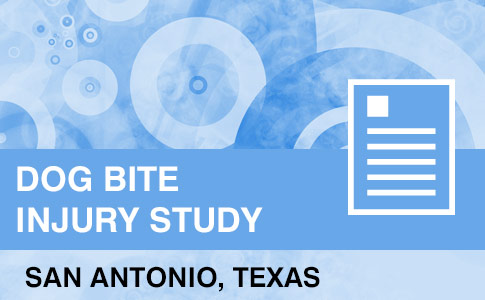 April 2011 - Issue 4
San Antonio, TX - In April, the Annals of Surgery, a highly referenced international surgery journal established in 1885, published a study about severe and fatal injuries inflicted by pit bulls. The study, "Mortality, Mauling, and Maiming by Vicious Dogs," examined the medical records of patients admitted to the level I trauma center of San Antonio University Hospital with dog bite injuries over a 15-year period. The results bore the grim reality of pit bull injuries.

Objective: Maiming and death due to dog bites are uncommon but preventable tragedies. We postulated that patients admitted to a level I trauma center with dog bites would have severe injuries and that the gravest injuries would be those caused by pit bulls.

Results: Our Trauma and Emergency Surgery Services treated 228 patients with dog bite injuries; for 82 of those patients, the breed of dog involved was recorded (29 were injured by pit bulls). Compared with attacks by other breeds of dogs, attacks by pit bulls were associated with a higher median Injury Severity Scale score, a higher risk of an admission Glasgow Coma Scale score of 8 or lower, higher median hospital charges, and a higher risk of death.

Conclusions: Attacks by pit bulls are associated with higher morbidity rates, higher hospital charges, and a higher risk of death than are attacks by other breeds of dogs. Strict regulation of pit bulls may substantially reduce the US mortality rates related to dog bites.

The very first pit bull injury study, Pit Bull Attack: Case Report and Literature Review (Texas Medicine, Vol. 84, November 1988), was also published by a group of Texas doctors. This study helped provide critical evidence for the City and County of Denver after it enacted its pit bull ban in 1989. Just as its authors deduced in 1988 -- that the continued development of the pit bull breed would lead to more severe injuries and deaths -- has indeed manifested.

Authors of the New Study

Howling Critics of the Study

Predictably, the pit bull community is in a state of alarm regarding the University Hospital study. A new Craven Desires' post tackles the fanatical No-Kill and hired gun pit bull lobbyists (dog nuts) who are claiming that they should determine Public Health policy concerning dangerous dogs, instead of the exceptional group above who are committed to the safety and welfare of human beings, as well as performing and advancing sophisticated surgical procedures.1

Methods of the Texas Study

The study was a retrospective review of cases of dog bites admitted to the hospital's level I trauma center between January 1, 1994 and April 30, 2009. To locate subjects, study members reviewed the hospital's medical records and Trauma Registry. Members also queried databases for ICD-9 codes indicating the diagnosis of a dog bite. Dog breed information was obtained by reviewing animal injury reports at the city's Animal Care Services department.2

Portions of the Texas Study

In addition to the portions we've quoted below from the Discussion area of the study, in the Introduction, the authors throw a wrench into the so-called pre-pit bull killing period between 1966 to 1980.3 They note that "although 16 deaths were attributed to German Shepherd Dogs and only 6 were attributable to pit bulls" during that period, the registration numbers of pit bulls was so low that they were still killing at a rate 33 times higher than German shepherds.

The authors delve into the cost of dog bites in several areas of the study. In one part, they note that in 1995, the charges for hospitalizations that resulted from 469 dog bites totaled $3.4 million in Pennsylvania. "Notably, government payment sources were responsible for 48% of the total costs," states the report. Insurance estimates for 2007 placed an annual cost of dog bites for U.S. home insurers at $356.2 million and total losses may exceed $1 billion annually.

The authors also touch on dog bite ordinances. They note that 17 U.S. states have "one bite" laws, where the dog is allowed one free bite (or in the case of pit bulls, one free mauling) prior to triggering ramifications. They also note that 12 states have laws that prohibit breed-specific laws (BSL). To emphasize the dismal results of these laws, the authors point out that Texas, which leads all states in fatal dog attacks, is governed by both "one bite" and anti-BSL laws.

"These breeds should be regulated in the same way in which other dangerous species, such as leopards, are regulated."
- study authors

"In Texas, the laws regarding dogs that have been deemed dangerous are quite strict; these laws are similar to those regarding dangerous wild animals. The dangerous-dogs law in Texas requires special registration and containment of the animal and imposes strict insurance liability requirements on owners. Similar requirements exist with regard to the ownership of dangerous wild animals, such as lions, tigers and bears. The difference between the approach to wild animals and the approach to dogs is that wild animals are defined as dangerous on the basis of their species, whereas dogs must cause bodily injury before they can be determined to be dangerous."

Conclusions of the Study

The authors conclude that while fatal dog attacks are rare, there appears a distinct relationship between the "severity and lethality" of an attack and the breed of dog involved. The "actuarial risk" associated with certain breeds of dogs, specifically pit bulls, is unacceptable. The study adds that municipalities must be able to enact ordinances that protect citizens from this risk, and that to do so, local, county and state legislative bodies must address this issue.

Thank You - DogsBite.org and all of our readers, many of whom have suffered a devastating dog attack, greatly thank the authors of this study, not only for creating such a substantial and lasting research contribution in this area, but that these authors stepped further and recommended the regulation of a dog breed that has been mauling and killing innocent people indiscriminately and disproportionately for over 30 years. The number of human lives that will be saved due to this team's work cannot be quantified -- not ever.
Yellow highlights courtesy of DogsBite.org.1Policy conversations pertaining to the safety and welfare of human beings from dangerous dogs should be led by doctors, public health officials and public safety organizations. Animal welfare groups, whose primary concern is animal welfare over the welfare of human beings, have little to no role in this conversation. Such groups clearly play a crucial role in developing tougher animal cruelty laws.
2This is the critical missing link readers. Hospitals track dog bite injuries through ICD-9 codes. But breed information stays stuck in an animal control database. The only way to determine severity of injury by dog breed is for a hospital to review animal control records. This is exactly what members of the University Hospital study did (Kudos to the Department of Surgery at the University of Texas Health Science Center in San Antonio!).
3The period from 1966 to 1980 is often used by pro-pit bull groups to argue, "a new decade equals a new killer dog breed." For instance, German shepherds were the killers of the 1960s, Dobermans were the killers of the 1970s, pit bulls took over the role in the 1980s and the 1990s mark the decade of the killer rottweiler. This false argument is designed to make persons believe that every new decade brings a new killer dog breed. We encourage readers to review Fatal Pit Bull Attacks - The Archival record to see just how long pit bulls have been indiscriminately killing human beings (since 1858).