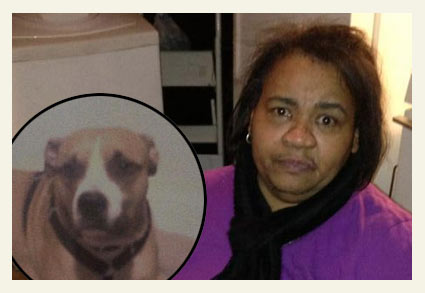 Terry Douglass and Boosie, the 4-year old male pit bull that killed her.

Policy Problems
UPDATE 11/04/13: On Monday, CBS Baltimore aired a headine segment asking questions about why a pit bull with a history of two attacks was returned to its wheelchair-bound owner. The animal's third attack killed its owner. Reporter Rochelle Ritchie states in the onset of the segment, "Advocates say it should not have happened. In fact, the woman had a huge gash on her face from when the dog had attacked before." Victims' advocate Tony Solesky is featured in the piece.

Tony Solesky is the father of a young pit bull mauling victim at the center of Tracey v. Solesky, an appellate court decision that declared pit bulls "inherently dangerous" in the State of Maryland. The high court decision attached strict liability when the breed attacks; this liability extends to landlords when a tenant's pit bull attacks. The Court issued the ruling in April 2012. The decision has been the subject of much controversy across Maryland and the Northeast ever since.

Ritchie summarizes in the segment, "Why the dog was returned to Douglass after it attacked remains a huge question that is unanswered. We tried to speak with health officials here at the health department. They would not go on camera." Solesky adds, "This is a problem of policy, and it's a problem they're aware of. The only time it gets addressed is when we have these horrific incidents." Solesky will continue to push Baltimore City Health Department officials to learn more.

11/03/13: Health Department on Defense
The Baltimore Sun released an update on Sunday showing the failure and bias of the Baltimore City Health Department, which oversees animal control. The article states that animal control officers seized Boosie in April of this year after a biting incident involving two people, but returned the animal because they "did not feel the dog was a threat to the public." The department denied responsibility further by stating that Douglass was "adamant in getting the dog back" afterward.

[Health department] officials said they do not have special rules for pit bulls, noting that any breed has potential to bite.

"Baltimore City Animal Control supports responsible pet ownership and not laws that single out a specific breed," a statement read. "According to the [U.S. Centers for Disease Control and Prevention], nearly 4.5 million Americans are bitten by dogs each year. Dog attacks often result from multiple factors; it is not necessarily the breeds themselves that are dangerous."

Minutes after posting the above portion, "Health Department on Defense," The Sun article updated with new and noteworthy information. According to the victim's daughter, Tamathia Davis, "To get her mother to give up the dog, Davis said she wouldn't let her 1-year-old son visit from their home in Pennsylvania. She also said she asked the landlord to ban the dog," states the piece. Davis admits in the update that she too owns and loves a pet pit bull that she raised from a puppy.

The victim's nephew, Torian Wellsey, is included in the Sunday evening update as well. Wellsey was attacked by the dog along with Douglass in April (not her son as stated in previous news reports). Wellsey told The Sun, "The dog was a vicious dog. She thought she could control it and she couldn't." Wellsey said his aunt tried to stand from her wheelchair to reach for a glass of water, but fell onto the ground when her pet pit bull attacked. "He ripped her apart," Wellsey said.

The update also shows how BARCS and city animal control are distinguishing themselves. "Boosie was housed at BARCS' facilities during the quarantine period, but the city's animal control department made the decision to return the dog," states the piece. New readers may be confused about this kind of intertwining co-dependent relationship. One entity "confiscates" dogs and the other "cares for, temperament tests and adopts" them out; the former is like a tow truck service.

Apparently, it was the tow truck service2 that sent the two-time attacker back to its crippled owner.

11/03/13: Attacked Victim Twice Before
Late Saturday night, The Baltimore Sun published a disturbing update to the nation's most recent fatal pit bull attack. Terry Douglass, 56, died after "Boosie," her 4-year old male pit bull she had raised since a puppy, attacked her for a third time. Her daughter, Tamathia Davis, said the dog had attacked her wheelchair-bound mother twice before. The attacks began about 2-years ago, around the same time Douglass began using the wheelchair due to suffering from cerebral palsy.

Davis describes the first attack as occurring about 2-years ago. The animal bit Douglass in the face so horribly that "whenever my mom would open her mouth, her cheek would open with it," Davis said. The second attack occurred last year when Boosie bit Douglass and one of her sons. A city shelter placed the dog in quarantine after the last attack Davis said, but allowed the dog to be returned home to Douglass even though Davis and other relatives pleaded with them not to.

Why Was No Pause Given?

Pause certainly should have been given by the city shelter due these overwhelming issues.

11/02/13: Woman Killed by Pet Pit Bull
Baltimore, MD - In a developing story, a 56-year old woman died Friday after being attacked by her pet pit bull. Police officers responded to a call of a "dog bite" to a home in the 2000 block of East 30th Street about 12:45 am,3 according to police spokesperson Detective Jeremy Silbert. Officers discovered the injured woman in the Coldstream Homestead Montebello neighborhood home. She was taken to the hospital where she died. We anticipate more information shortly.4

View the DogsBite.org Google Map: Maryland Fatal Pit Bull Maulings.
1The earlier Sunday article is time stamped at 4:41 pm EST.
2We don't believe the tow truck service made this decision independently of BARCS. Further, clearly it is BARCS that is steering the city's public policy on the "pit bull" issue.
3This attack only first came to light nearly 24-hours later. The time stamp on The Sun article is 11:16 pm Friday.
4As of 11:30 pm Saturday (EST), there has been no new information, 46-hours after first responders arrived. Given the endless press about the Solesky ruling -- much of it in defense of pit bulls -- it is reasonable to question why the City of Baltimore and local media are responding to this woman's death in this "tight lipped" way. The last Maryland dog bite fatality occurred in May 2006. Raymond Tomco, 78, was mauled to death by his daughter's pit bulls.