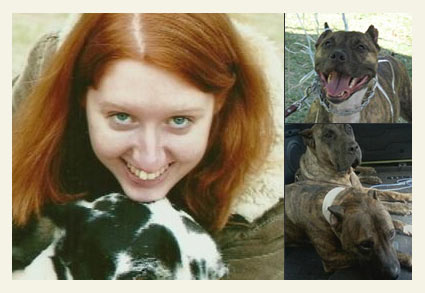 Rebecca Carey, 23-years old and a dog rescuer, was killed by one or more dogs.

Adoption Information
UPDATE 08/17/12: A hot tipper sent in a cached web page of two of Rebecca Carey's dogs, a pit bull named Napoleon and a presa canario named Louis. Both dogs were adopted over five years ago from the Gwinnett Animal Welfare and Enforcement Center. This is how Napoleon looks now at the age of 6. We continue to search for answers as to why Jackie (Jacqulynn) Cira, who works at The Village Vets as a receptionist, was having Carey dog-sit her presa canario, named Danai.

Carey would have been 5-years younger at the time she acquired Napoleon and Louis1 -- an age and dog breed combination that ought to rattle the nerves of any sensible animal adoption agency, despite the dogs becoming "inseparable." Thus far, we have little information about the two other dogs Carey eventually acquired, other than that one was 15 pounds. The earlier AJC.com article noted that Carey had been dog-sitting Danai for only a week prior to the fatal dog mauling.

08/17/12: Killed Last Weekend
New information about the death of Rebecca Carey reveals that one of the two presa canarios was owned by Carey's friend, Jackie Cira.2 For unknown reasons, Carey was dog-sitting Cira's presa canario, named Danai. Cira discovered her friend's bloody body Sunday afternoon after she failed to show up for work at Alpharetta's Loving Hands Animal Clinic. Police initially thought they were dealing with a homicide, but it soon became clear that the fatal attackers were dogs.

08/17/12: Young Woman Killed
DeKalb County, GA - In a developing story, a young woman who rescues dangerous dog breeds to spare them death, was found horrifically killed by one or more of the five dogs in her Decatur home. At the time of her death, Rebecca Carey was caring for two presa canarios (See: Diane Whipple), two pit bulls and a boxer-mix. DeKalb animal control took custody of all five dogs and subsequently put them down. Animal control’s interim director Tim Medlin told WSBTV.com:3

"We didn’t know which dog did which. I can’t be wrong. Not just myself, no one can be wrong in putting out a dog that possibly had to do with these type of injuries. I will not put another person at that kind of risk."

Carey's family issued the following statement after her death was publicized:

"Rebecca Carey of Decatur was 23 years old and an avid animal lover. Since the second grade when she read the book Throw Away Pets she vowed to be a voice for all animals. She attended Georgia Perimeter College and worked at a veterinary clinic. Upon placing her first abandoned animal in a permanent loving home in 2003, she volunteered countless hours with rescue networks and animal shelters. There she did what she loved the most: rescuing animals from untenable situations to find them safe, loving homes."

In a separate article, Medlin said Carey’s death was the county’s "first fatal dog bite." According to the Fatal Pit Bull Attacks website, this statement is untrue. As recently as 2007, 2-year old Robynn Banks was killed by a pit bull and mastiff-mix. Other DeKalb County victims killed by pit bulls include Chett Heyder, 2-years old (1988) and Billy Gordon Jr., 4-years old (1986), the latter being an historic fatal pit bull attack involving the landmark criminal trial of Hayward Turnipseed.

View the DogsBite.org Google Map: Georgia Fatal Pit Bull Maulings.
1Cira told media sources that Carey adopted Napoleon when the animal was 6-weeks old.
2Cira goes on to say that Carey would have been devastated to learn that all of the dogs had been put down, particularly her pet pit bull of 6-years, Napoleon. Cira also claimed her own presa canario -- that Cira temporarily pawned off onto Carey -- was the "love of my life."
3Notably in May, DeKalb County lifted a zoning code that made it difficult for animal shelters to adopt out pit bulls. The so-called "DeKalb County pit bull ban" was so confusing that it was never even documented by DogsBite.org.