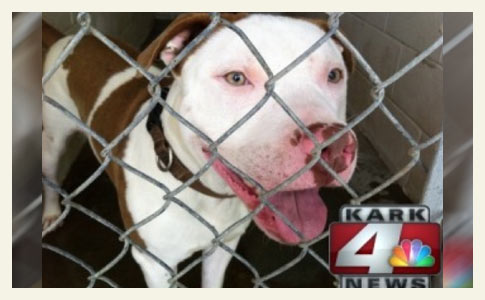 One of two pet pit bulls that killed their owner, Deborah Wilson-Roberts.

Autopsy Results
UPDATE 09/11/12: Autopsy results confirm that Deborah Wilson-Roberts, 45-years old, died of extreme blood loss. Both pit bulls participated in the attack. Her husband, Brian Roberts, left the home for about 20 minutes to take a shower next door -- the Roberts home has "no running water." He returned to find his wife on the floor with one leg nearly "chewed off." The victim was pronounced dead on the scene. No criminal charges are expected against the husband.

09/10/12: Mother Speaks Out
The victim's mother, Patsy Cannon, told KARK 4 News that she had warned her daughter that pit bulls were not good dogs to have as pets. Cannon even told the reporter she felt the dogs would turn on her daughter one day. "I don't feel like she needed the dogs," Cannon said. She added, "I've heard a lot about [pit bulls] and I didn't particularly care for her having the dogs, but when you get to a certain age what are you gonna do?" Cannon now awaits the final autopsy report.

The victim's mother says she had warned her daughter that pit bulls were not good dogs to have as pets. She even told me she felt the dogs would turn on her daughter one day.

"I don't feel like she needed the dogs," said Patsy Cannon.

Cannon is talking about this pit bull which now sits in a Pine Bluff Animal Control cage. It's believed to have killed Patsy's daughter Debra Wilson-Roberts.

"They were protective of her at one time," said Cannon.

But last Friday night a 9-1-1 call came in with a different story. Deputies say they arrived to this home on NCTR Road and could see Debra's body inside, but couldn't get to her, they say the dogs were hovering over her body. A deputy shot and killed one of the dogs, the other was able to be taken in alive ...

Cannon says she tried to warn her only child about owning pit bulls. "I've heard a lot about them and I didn't particularly care for her having the dogs, but when you get to a certain age what are you gonna do." - Arkansas Matters

09/10/12: Dog Was "Real Playful"
New information suggests that only one of the victim's two pit bulls, named Zeus, attacked and killed Deborah Roberts, according to her husband. Thus, there may be an attempt by him to reclaim the other pit bull that was not shot to death on the scene. A friend of the deceased woman, Marla Glover, said the victim "really loved Zeus," and that the dog would "crawl up in her lap and was real playful." Glover blamed the deadly attack on a storm that blew in Friday night.

09/10/12: Previously Attacked Victim
In a story updated late Sunday night, Major Lafayette Woods Jr. told KATV News, "It was a gruesome scene. There was a substantial amount of blood at the scene, also damage to the body that we believe came as a result of the dogs attacking." Additionally, it was the victim who had been attacked by the dogs before, according to her husband. It was unclear to Woods Jr. how substantial her injuries were at that time, but was told she was taken to the ER.

09/09/12: Woman Dies After Dog Attack
Jefferson County, AR - In a developing story, deputies are investigating the death of a 45-year old woman found dead in her home and believe her own pit bulls are to blame. On Friday evening, Deborah Rene Wilson-Roberts was discovered by her husband lying on the floor with "extremely severe" bite injuries on both legs. Deputies believe the dogs may have severed one of the arteries in her legs causing her to bleed to death. The victim was pronounced dead on the scene.

Deputies tell KARK they were called to a home on US 365 around 11:00 p.m. Friday. Her husband, Brian Roberts, told deputies he had left the home for about 20 minutes1 and when he returned, he found his wife, lying on the floor of their home. He could not get to her, however, because their two pit bulls were acting very viciously and would not allow him entrance. (arkansasmatters.com)

The aggressive pet pit bulls also prevented deputies from reaching the victim. Responding deputies shot one dead; the other pit bull was captured by animal control. The victim's husband was quick to point out to deputies that his wife "had previous health problems." An autopsy will be performed to discover the exact cause of this woman's untimely death. Both pit bulls owned by the Roberts had been known to bite humans in the past. More information is expected soon.

1Another short departure by a husband or male friend, only to arrive back to a woman killed by pit bulls.