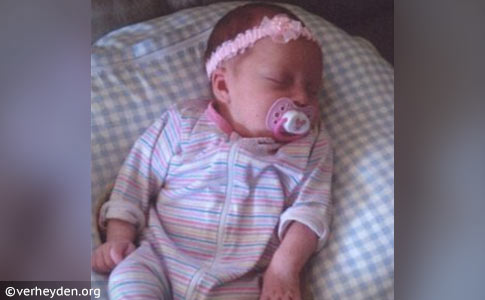 Tarilyn Bowles, 3-weeks old, was mauled to death by a pit bull on Detroit's west side.

The funeral for 3-week old Tarilyn Luciana Bowles, mauled to death by a family pit bull while strapped into a child safety seat, is scheduled for Wednesday. DogsBite.org along with commenters have been repelled by the statement by the owner of the dog blaming the deadly attack on the animal smelling "baby formula on the infant's clothes." The endless denialism by the owners of these dogs after a violent or fatal attack, as in the case of Tarilyn, is reprehensible.

Alexandra Semyonova
The idea that a normal domestic dog will attack a human because that human smells of food is utterly ridiculous. If this were the case, shelter workers, dog trainers and dog behavior therapists would be taking their life in their hands every time they interacted with a dog while carrying treats in their pockets. If you have food and a dog wants it, the dog will try various begging behaviors. They won't attack you to take the food. If you have food on your clothing, a dog might lick the spot on your clothes where the food was spilled. A normal dog will not therefore suddenly confuse you with kibble in its bowl and try to eat your face. Even a pit bull doesn't attack a human because it's hungry.
As I pointed out here only a week ago, the pit bull type dog has a highly breed-specific behavior pattern, created by more than four hundred years of intensive human selection. This genetically determined, breed-specific behavior pattern is inherent in the pit bull. It feels good to the pit bull when this pattern is set in motion. Because it feels good to do what it was bred for, the pit bull doesn't need much stimulus to start executing its innate behavior program. In fact, any excuse will do. In this sense, the pit bull is no different from any other working breed. If a pointer had suddenly seen the baby on the floor, it likely would have pointed at the baby (feels good to point to the thing the human should be attending to). If a border collie had come into the room, it likely would have circled and stared at the baby, trying to 'eye' it back close to the mother where babies belong (feels good to keep the herd together by circling and eyeing). The pit bull is different from other working breeds only in that it's inbred behavior pattern isn't harmless.
However, the issue raised here with the 'formula' theory isn't only the issue of a working breed doing what it was bred for. It's also the issue of how even highly educated dog 'experts' acknowledge that working behavior is inherent in every working breed dog, but deny that this is also true of the pit bull. It's the issue of these dog 'experts' trying to redefine the domestic dog in such a way that the genetically engineered attack behavior of the pit bull becomes a normal trait in the domestic dog. It's the issue of various dog 'experts' now even starting to mouth some of the myths and lies that were originally thought up by uneducated pit-bull fans: when a pit bull suddenly kills, it’s predatory behavior; the pit bull is, of all breeds, especially good with children; if a pit bull kills a child, it’s due to egregious parental incompetence and negligence; since parents also kill children, we needn’t be alarmed that pit bulls do; socialization and training can get rid of genetically determined pit bull behavior.[1]
In the face of this in fact egregious 'expert' behavior, I'd like to repeat the biological and ethological facts here. The domestic dog is not a hunting species. Even if it were a hunter, it would only kill when hungry and it wouldn't confuse social partners with food. (Please note that the pit bull that killed this baby had just been fed.) The domestic dog prefers to avoid conflict and danger. Pit bulls had to be specially selected and bred, because a normal dog will flee if it sees a threat (such as a bull or a bear), and because a normal dog won't attack unless it is cornered and fearing for its life. Even then, the normal dog will use exactly as much aggression as it needs to open up a flight route (not a bit more). A full-fledged attack is extremely rare in the normal domestic dog. This normal behavior is what has always kept us safe with dogs. Children and dogs wandered villages and neighborhoods together for thousands of years without children being routinely killed by the dogs. The types of dogs that routinely kill children do this not because they are dogs, but because they have been highly bred to be different from all other dogs.
The 'formula' theory is only one in a long series of inane fictions people are inventing to excuse a pit bull when it does what it was bred to do. The inanity becomes clear if you look at the list of excuses: stormy weather, calm hot weather, calm icy weather, not being neutered, being neutered, being fed, not being fed, and now the very smell of food. You have to admit, the 'formula' theory does open up great possibilities for also excusing pit bull attacks on adults. 'I got some spaghetti sauce on my shirt at dinner, so the pit bull must've thought it was attacking a plate of spaghetti.'
The only valid explanation for the attack on this child is: the dog was a pit bull. If your pit bull kills your child, it's not because it confused your child with a bottle of formula. It's because it's a pit bull, because the pit bull is a working breed, and because killing is what the pit bull has been genetically engineered to do.
[1]This is just one example of a highly educated dog guru letting the pit fans instruct him rather than the other way round.1

10/04/12: Pit Bull Kills Child
Detroit, MI - In an unmatched fatal dog attack streak since 2005 -- and possibly in all modern times -- a dog has killed a human being again in the past 4.5 weeks. Detroit police say a 3-week old girl was mauled to death by a pit bull Thursday afternoon. Sgt. Eren Stephens said the child's mother took her inside a home on Staheilin Avenue in a car seat. Not knowing there was a dog in the home, the mother placed the infant on the floor still strapped in and briefly stepped away.

That was the last time this mother saw her baby "unmauled to death."

The Detroit News adds that a "phalanx of officers" removed the pit bull from the home as neighbors stood by. Some neighbors were angry and shouted that they would have stabbed the dog if they had witnessed the attack. Predictably the dog's owner, who has allegedly owned the animal for several years, quickly shut the door after police removed the dog. Neighbors also said the 24-year old mother of the baby had been living temporarily with a friend at the home.

Nine U.S. citizens have been killed by canines in the past 34 days.3 Given that on average since 2005 there are 30.4 fatal dog attacks annually, this 34-day period (essentially the month of September) has racked up nearly a third of this annual amount and there are still three months to go before the end of the year. Traditionally, November and December are often high fatal dog attack months. The U.S. is on track to surpass 40 fatal dog attacks for the year of 2012.

View the DogsBite.org Google Map: Michigan Fatal Pit Bull Maulings.
1Highlights and links added by DogsBite.org.
2Testicals do not appear to be present on this dog.
3Dates represent the date of death, not the date of the published post.
Share191
Share191
Donate Now