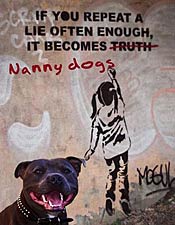 DogsBite.org - A new blog, "The Truth About Pit Bulls," launched Tuesday with contributors CKing and Craven Desires. The first myth they address, the Nanny Dog myth, is widely disseminated by pit bull advocates and pro-pit bull groups. According to the authors, the first mention of "nanny dog" with regards to any breed did not occur until 1904 when the first stage production of Peter Pan opened featuring a nursemaid dog that was never portrayed as a Staffordshire bull terrier.1

The first known reference of a Stafford likened to a nursemaid dog appeared in a 1971 New York Times article. Lillian Rant, President and magazine editor of the Staffordshire Bull Terrier Club of America, states in the piece that the breed formerly had "an unsavory reputation for fighting and violence and his name became associated with ruffians." Rant adds, "The Stafford we know today quickly becomes a member of the family circle. He loves children and is often referred to as a nursemaid dog."

To learn more about the Nanny Dog myth, please read the complete post.

"This blog has one goal: to expose the lies created by pit bull advocates and repeated to such an extent that they become regarded as truth. This propaganda strategy is known as Proof of Assertion and it is a favored tactic employed by the well organized pit bull apologia as it requires no critical thinking skills, only strength in numbers. The pit bull apologia's measure of success is even more simple. The Machiavellian like army of pit nutters need only drown out the opposition, regardless of the fact that their arguments completely lack any substance or merit. The pit bulls' army is made up of a handful of elite pit bull advocates like the sinister Jane Berkey, Ledy Vankavage, Cydney Cross, Karen Delise, Donna Reynolds, Dawn Capp and Diane Jessup2 who orchestrate the campaign for thousands of dedicated gullible drones that perform the grunt work; infecting the internet with the rote memorization of fabricated talking points. As their insane and baseless rantings begin to leach outside of the cult like bubble they live in and infect normal citizens, humane societies and law makers, it is critical that their lies be exposed."

1Note the invisibility of references in Google News Archive from 1870 to 1984 for the term "nanny dog." 1984 marks the year when municipalities began enacting pit bull laws, which started in the Village of Tijeras.
2In brief: Jane Berkey owns and operates Animal Farm Foundation and the National Canine Research Council, both of which disseminate mass pit bull propaganda. Berkey's group donates tens of thousands of dollars to Bad Rap, a pit bull rescue group run by Donna Reynolds. Cydney Cross operates "Out of the Pits," another pit bull rescue group, who adopted out a pit bull that nearly killed Frankie Flora last year. Cross formerly worked for Berkey and was allegedly mauled by a pit bull on her property between 2002-2004. Karen Delise formerly operated the National Canine Research Council until it was purchased by Berkey in 2007. Diane Jessup operates the Working Pit Bull website and authored the book, "The Dog who Spoke with Gods." She was represented by Berkey's agency, the Jane Rotrosen Agency who uses a creepy Tim Racer (husband to Donna Reynolds) pit bull carving as it's mascot. Ledy VanKavage is a hired gun for Best Friends and formerly worked for the ASPCA. Dawn Capp operates Chako the pit bull rescue, which was formerly Chako the lobbying group.