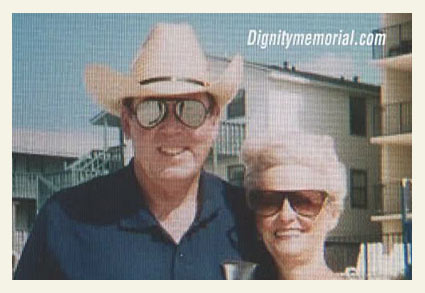 Undated photo of William Donald Thomas and his wife.

Indicted for Manslaughter
UPDATE 12/11/12: Both Jerry Lenton 56, and his wife Jacqueline Lenton, 56, of Leeds turned themselves into local police authorities after a grand jury indicted the couple for manslaughter and criminally negligent homicide in connection to the September 20 mauling death of William Donald Thomas. The indictments state that the Lentons "did recklessly cause the death of William Donald Thomas," and "…did with criminal negligence cause the death of another person…"

Separately, St. Clair County District Judge Alan Furr initially ordered the 33 dogs confiscated from the Lenton's property to be put down. He later changed his mind allowing Birmingham-Jefferson County Animal Control to decide the fate of each dog. Of the 33 rottweilers seized, 5 failed temperament testing and were euthanized. The remaining 28 rottweilers and rottweiler-mixes were released to local and out-of-state animal clinics to be adopted back out into the community.

10/02/12: Dogs to Be Put Down
St. Clair County District Judge Alan Furr today ordered the destruction of all 33 rottweilers and rottweiler-mixes seized from the property of Jerry Lenton and his wife after the fatal dog mauling of William Donald Thomas. Gwendolyn Connelly, a prosecutor with the St. Clair County District Attorney's office, asked Judge Furr to order that the dogs be put down. "They were raised in an environment that created basically a murder weapon," Connelly said. Judge Furr agreed.

Leeds police Detective A. R. Holman was the only witness at the hearing. In addition to testifying about the aggressive behavior of the seized dogs, Holman also answered questions about the victim's injuries. "From about the knee area down his jeans were shredded and both legs were shredded down to the bone," Holman said. Thomas also had bite wounds on his right arm. Prosecutors are still determining whether to bring charges or to present the case to a grand jury.


09/21/12: https://archive.is/7q9uC
In a devastating update, the victim's wife, Frances "Sally" Thomas describes where she found her dying husband when she arrived. She said Donald "Don" Thomas was lying in the yard of her neighbor Jerry Lenton and his wife. "The mail was just scattered everywhere and I saw his walking stick and his glasses," she said. She screamed and hollered out for help, but no one in the neighborhood was around. She was forced to leave her severely injured husband to call police.

Jerry Lenton and his wife ran the breeding operation in their backyard. It is unknown if anyone else in the area, including Frances and Donald Thomas, had any idea how many rottweilers the Lentons kept on their property -- 35 including the two that were shot and killed on scene. Frances added that the two dogs that attacked her husband were "smart" and often escaped from the Lenton's property. "They'd know just when (the Lentons) left and they would get out."

09/20/12: Senior Citizen Killed by Dogs
Leeds, AL - In a developing story, an elderly man was killed by at least two rottweilers in Leeds. The victim had been attempting to get his mail when the dogs came from a neighbor's yard and attacked, according to the WAFF article. A responding officer shot both dogs dead. Officers later discovered 26 other dogs2 -- identified as rottweilers and their mixes -- behind a home on the same street. The dogs' owners are currently answering questions at police headquarters.

View the DogsBite.org Google Map: U.S. Fatal Rottweiler Attacks By State
1One neighbor interviewed said that Thomas was a military veteran that fought in the Korean war. The victim's full name is also being reported as William Donald Thomas, 83-years old.
2Police Chief Byron Jackson refers to it as a "breeding operation" in the Fox6 article and that there were 33 dogs.