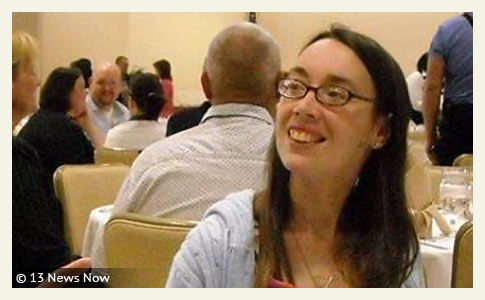 Suzanne Story, 36, was killed by a pit bull-mix given to her a few weeks earlier.

Newspaper Finds Owners
UPDATE 02/12/16: Yesterday, we learned from The Virginian-Pilot that the advertisement for the dog was actually placed in The Pilot. A stroke of good luck in the ability to track down the former owners of a pit bull-mix that was off-loaded to Suzanne Story then killed her a few weeks later. “There was blood everywhere,” her mother Debbie Brown said. “Her hair was just soaked -- solid blood -- just covered in blood.” The first edition article was later replaced by this evening update.

"Story had seen a classified ad in The Virginian-Pilot a couple weeks ago advertising Buddy as an easy-going dog that was good with kids. She called a Virginia Beach couple who delivered the dog to her home. When Story offered to pay, the couple just gave her the dog for free and took off." - The Virginian-Pilot, February 11, 2016, First Edition

The pit bull named "Buddy" was a 1.5-year old male pit bull-mix, not a female as previously reported. Story had been cleaning the dog's crate, when the animal suddenly attacked her, ripping open her throat. Her sister and roommate Robin Ross was in the house and heard her screams. She was able to pull the dog off Story -- amazingly -- and lock it in the bathroom. But the dog broke a hole through the bathroom door and continued attacking Story, executing the killing bite.

The Age of Sexual Maturity

We pause now to remind readers of the 1.5 to 2-year old rule about these dogs best expressed by former Lucas County, Ohio Dog Warden Tom Skeldon in 2008. This is the age that pit bulls reach sexual maturity. "[The owners] all think that these pit bulls are nice sweet animals and some of them are, but by the time they get to be a year and half or two years old," Skeldon said, "they're pretty intent on what they're bred to do and that’s grab ahold of things and shake it until it's dead."

This is well known amongst many animal control officers and humane groups, but a fact rarely shared with the public. It is hardly surprising that the most common age of unwanted pit bulls in open admission shelters is 1.5 to 2-years old.1 The aggression has shown up exactly as Skeldon described. The "lucky" owners have had close calls with their animals or children in the household. Then it is "off to the pound" for that pit bull -- or in this case offloaded to an uninformed innocent.

A day after the deadly attack, a reporter at The Pilot contacted the former owners of Buddy, Cheryl and Carl Davino, and told them about the gruesome attack. Cheryl Davino played dumb and guilt-free after driving across state lines and dumping the dog at Story's door. "I don’t know what the heck happened," Davino said. "He was a big baby," she said. Notably, 10 On Your Side stated yesterday that they called a phone number for the Davinos, "but it was a wrong number."2

The Pilot published the advertisement that Davino purchased. “Pitbull & Boxer Mix-Very good w/kids, people. Male. 1 yr. old on Sept. 13. $100.” Davino said she had intended to give the dog away for free, but was reminded by The Pilot that it was a bad idea. "A sales rep told her to put down a dollar amount to make sure people were serious and the dog would be taken care of," states The Pilot. After arriving at Story's house, they gave her the dog for free, as intended.

The Breeder of "Buddy"

After The Pilot published the story, a user with the alias Mike Brown left several comments. We have no idea if what he states is true and we have no sympathy or respect for alias Brown either. We have no sympathy or respect for ANYONE breeding pit bulls in an era when nearly a million3 unwanted pit bulls are systematically euthanized each year and countless others are pawned off to the uniformed then traded "like playing cards" to find a home where the dog won't kill something.

mike brown - "I agree. I bred this dog and am shocked but at the same time I'm not. He wasn't a toy. He was a living soul that couldn't talk. He probably was upset and wanted to go home. I'm just glad this story isn't about me or my family. I had offered to take him just 1 week ago."

mike brown - "I bred this dog. He was American bulldog/pittbull mix. I had just watched him for the owners over the holidays for 2 weeks. In that time he was not aggressive but it was clear he was not trained. I had told the owners 1 week ago if they were going to get rid of him I would like him back. They had wanted to get rid of him after he picked up there small dog and had the dog in his mouth. I only can say that his brothers and sisters are good dogs. His parents are also great. This dog should not have been bounced around. First to me for 2 weeks then only a few weeks later given away. Buddy just wanted to go home. He had just been abandoned 3-4 weeks prior. I'm sure that played a huge roll. I feel terrible about this. Another crazy coincidence is I believe she had a brother that works for me that is in jail rite now. They don't know each other but have the same dad. I can't confirm this but there last names are the same and the age is very close. If this is true then her brother at one point had the dogs sister from the same litter. Man this is sad sad news. I will answer any questions related to buddy."

mike brown - "How am I ignorant?  I saw there was a problem and offered to take the dog back. The lady should have just given him back. I wasn't going to give him to someone else. Man if I woulda known this dog would have been bounced around like this she never would have gotten the puppy. Unfortunately you can't see the future. There are 6 more brothers and sisters of Buddy. Whoever bought a bully pit in the neighborhood of redwing off oceana and general booth around November 2014, you probably bought one of his siblings. Please be safe and call me if you need to find him a new home."

Despite alias Brown claiming Buddy's siblings are "good dogs," his brothers and sisters are now squarely in the 18-month old period too. Who knows what might happen? Remember what Skeldon said -- some will remain good and others will not. Shuffling a dog from home-to-home is a never a good idea for the animal, but its no excuse for unleashing a massive attack, killing its new owner either. "Please be safe and call me," Brown wrote, but he did not leave a phone number.

The photograph series taken by The Pilot of Story's family after her death is heartbreaking.

02/10/16: Advertised as "Pit Bull"
13News Now interviewed Suzanne Story's stepfather Randy Brown. He said that she saw a newspaper advertisement about a "female pit bull" that was placed by someone in Virginia. The "off-loaders," who offered the dog for free, drove to Story's home in Perquimans County and delivered the dog that would violently attack and kill her a week later. The off-loaders told her the dog was gentle and good with children. Brown thinks the people knew the dog was dangerous.

"I think they had a problem with the dog and didn't know how to handle it, and they were just trying to get rid of it, and they did." - Randy Brown

Story's neighbor, Jonathan Nash, told 13News Now he was concerned the first time he saw the dog. "I saw her walking the dog. The dog was really pulling her and she was struggling to maintain control from her driveway to her front door." He added, "I started to worry about my little one. If the dog gets out, what is he going to do?" Nash said. Family members say Story was cleaning the dog's crate when the animal attacked her. Story's sister was there, but could not stop the attack.

Brown vowed to find the off-loaders of the dog with the help of an attorney. Yet the whole situation is sketchy -- seems doubtful the previous owners will be easy to track down. However, they did place an advertisement, we hope in a paid newspaper, leaving a credit card trail. God help anyone who agrees to take a pit bull free of charge whose owners drive across state lines to dump the dog at your door. Story leaves behind two daughters ages 15 and 17-years old. We pray for them both.

02/10/16: Died While in Helicopter
Perquimans County, NC - A North Carolina woman is dead after being viciously attacked by her pet dog, described as a pit bull-type dog. Perquimans County Sheriff Eric Tilley said the attack occurred about 1:00 pm Wednesday in the 1200 block of Snug Harbor Road. Her injuries were so extreme, a helicopter from Sentara Norfolk General Hospital in Virginia was sent to airlift her to the hospital. The victim, Suzanne Story, 36, died as the helicopter was landing, Sheriff Tilley said.

Only Had Dog for a Week

On the 13News Now Facebook page post, they state, "The woman's mother said her daughter got the dog about a week ago after seeing an ad in a newspaper that she was good around small children. We're working to get more information…" As far as the breed mixture goes 1.) It will be interesting to see what the newspaper ad said, and 2.) There certainly appears to be olde English bulldogge, pit bull and Johnson or Scotty-type American bulldog; all dangerous gripper breeds.

The victim's stepfather, Randy Brown also of Hertford, posted on his Facebook page about an hour ago, "MY stepdaughter got killed today by a pit. The people that raised this dog need to be held responsible, because they lied about the nature of this dog. I will pressure the issue. Randy Brown." Suzanne Story was the mother of two. Her Facebook photo album shows a variety of pet cats, dogs and other animals, as well as pit bull awareness memes. She was very animal friendly.

In 2012, a 10-month old boy was fatally attacked by a family pit bull-mix in Perquimans County. 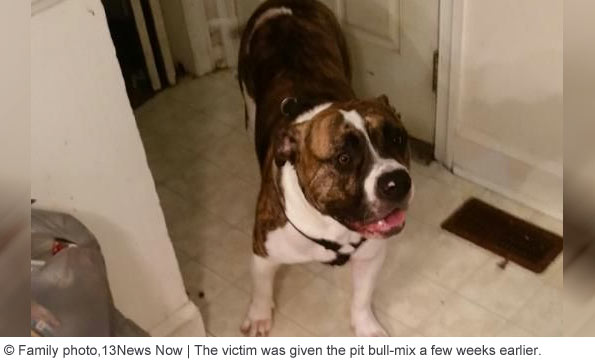 View the DogsBite.org Google State Map: North Carolina Fatal Pit Bull Attacks.
1Obsessed about pit bulls? By Merritt Clifton, Animals 24-7, September 10, 2014 (www.animals24-7.org)
2They stated in the video, however, that they called the phone number in the advertisement and they were sent to an "unnamed voicemail." That's all we know.
3Oakland hires former SF animal control chief Rebecca Katz to face Nathan Winograd and pit bull advocates in their lair, by Merritt Clifton, November 1, 2014, Animals 24-7 (www.animals24-7.org)