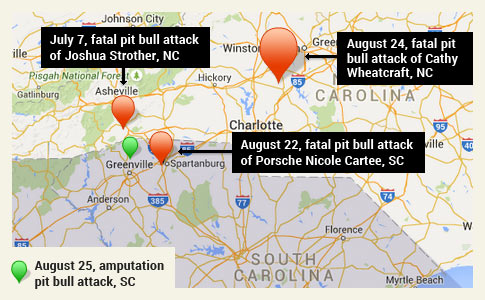 Survivor is Pit Bull Owner
UPDATE 08/25/15: New information has been released about the fatal pit bull attack in North Carolina. On Monday, Cathy Wheatcraft, 48, was fatally attacked by her neighbor's pit bull. She had just gotten her mail and was walking back to her home when the dog attacked, according to Davie County deputies. The dog "drug her down the yard and fatally bit her," Sheriff Andy Stokes said. The pit bull also attacked neighbor Sheena Truesdale, 31, who tried to help the victim.

"[The pit bull] growled and charged me, caught me in my shoulder and that's what made me fall to the ground. We were fighting and then he caught my inner thigh." - Sheena Truesdale, survivor and pit bull owner

Truesdale tried to get into a nearby car to escape the animal, but the pit bull continued coming at her. After she got into the car and tried to shut the door, the pit bull latched onto her arm again. The dog was still latched on, trying to pull her out of the car, when a Cooleemee police officer arrived. "If it wasn't for that police man who showed up, [the pit bull] would've got me out of the car, my arm would've been much worse and I would probably be dead myself," Truesdale said.

The fatally attacking pit bull was declared a "nuisance animal" in May after escaping its owner's property and attacking a dog. In a strange twist, the victimized dog belonged to Truesdale. At some point before attacking the two women Monday, the pit bull escaped its owner's home through a window. Truesdale is a pit bull fan and owns three of them. Despite what she witnessed and underwent, she does not believe "pit bulls are aggressive dogs." Her death wish is her own.

View The Fox 8 segment shows that the pit bull jumped out of a window 10 or 11 feet up.

08/25/15: Declared a 'Nuisance Animal'
The Davie County Sheriff's Office has identified the fatal dog mauling victim as Cathy Wheatcraft, 48-years old. The woman was savagely killed by her neighbor's pit bull Monday night in front of her home at 243 Clark Road near Cooleemee. At the time of the deadly attack, she was checking her mailbox. The pit bull also attacked a neighbor who intervened to help, 31-year old Sheena Truesdale. She was transported to a local hospital and is in stable condition, officials said.

The fatally attacking pit bull belonged to Latisha Young who lives nearby. The dog was normally kept inside her home, but in this case "escaped through a window" while its owner was away at some point before killing one woman and injuring another. Just 3-months ago, the same pit bull was declared a "nuisance animal" after it escaped Young's property and attacked another dog. This time the pit bull escaped its owner's property and attacked two human beings, killing one.

The fatal attack of Cathy Wheatcraft marks the third pit bull fatality in this region since early July. On Saturday, in upstate South Carolina, 25-year old Nicole Cartee was killed by her family pit bull named "Spike" in Spartanburg. The dog had been with her family for over a decade. On July 7, Joshua Strother, 6-years old, was killed by his neighbor's pit bull in Hendersonville, North Carolina. The pit bull that killed Joshua was rehomed by the Asheville Humane Society 3-weeks earlier.

Today, over in Greenville County, South Carolina -- also in this same region -- a female deputy shot and killed a pit bull that was attacking two women. The pit bull had nearly severed one of the woman's arms before the deputy arrived. After shooting the dog, she applied a tourniquet to the woman’s upper arm and her leg. Master Deputy Jonathan Smith said, "She saved the lives of two people because the injuries were so severe." The dog had been residing with one of the victims.

08/24/15: Pit Bull Kills Woman
Cooleemee, NC - Another person has been killed by a pit bull in North Carolina. On July 7, Joshua Strother, 6-years old of Henderson County, was killed by a pit bull that was adopted out by the Asheville Humane Society 3-weeks earlier. The most recent fatal pit bull attack occurred in Davie County. Sheriff A.C. Stokes said the attack occurred at about 7:00 pm at 235 Clark Road near Cooleemee. The woman, in her 40s, was checking her mailbox when the pit bull attacked her.

Sheriff Stokes said the dog was killed by a Cooleemee police officer, who was the first officer to respond to the scene. - MyFox8.com, August 24, 2015

A neighbor who heard the woman screaming ran to help and discovered her in the yard -- the person then called emergency responders. Another neighbor also came to help and was attacked by the dog. She was transported to Wake Forest Baptist Medical Center. Her medical condition is unknown. Sheriff Stokes said it was the neighbor's pit bull that killed the woman. The news report video on WXII states that they spoke to the dog's owner who said her "pit bull killed a woman." 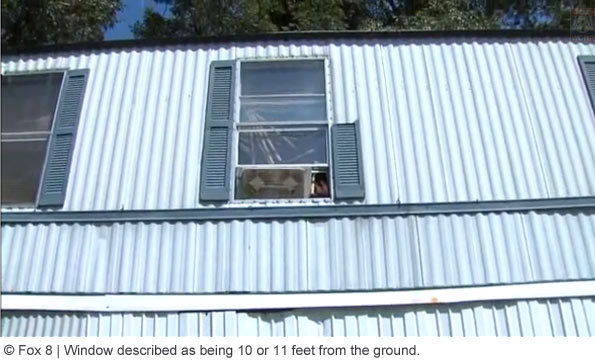 1But a shocker it was given any designation at all!