The Mechanics of a "Classic" Unprovoked Pit Bull Attack 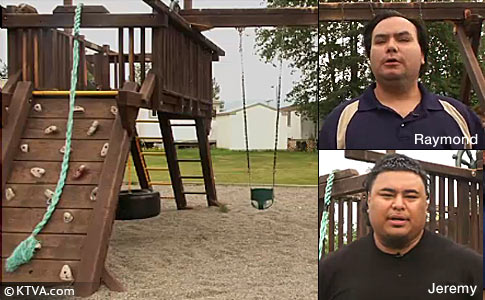 Victim Hospitalized
Anchorage, AK - Last Friday, a pit bull bolted out of a home and immediately attacked a 9-year old girl on a playground in Glencaren Court. The dog raced about 30-yards to the playground and latched onto the girl's head. While one man held onto the pit bull's collar, another man struck it hard with a crowbar several times. The pit bull eventually let go, but not before ripping off part of the child’s scalp. The dog then attacked both men until another man shot it in the head with a gun.

"That’s about the most scared I’ve been. Even when I was a firefighter, going into buildings that were on fire." - Rescuer Raymond Patterson

These elements, and more outlined below, are the basic mechanics of a "classic" unprovoked violent pit bull attack and why this breed is so dangerous. The only unusual aspect about this severe mauling is that three responding adults were men -- one a former firefighter -- and on hand quickly was a crowbar, pepper spray and firearms. Had this not been the case, the little girl might have died and there would have been more than one person seriously injured by the pit bull.

Before we dive deeper into the basic mechanics of a "classic" unprovoked violent pit bull attack, it is important to watch the web exclusive video by KTVA of neighbors Raymond Patterson, a former firefighter, and Jeremy Tui (scroll to see second video). Patterson witnessed the pit bull tear off the little girl's scalp -- he's still a little out of breath in the video. He also gives a blow-by-blow of the amount of force it took to get the pit bull to release. Tui is also present when the pit bull releases.

"The dog had ahold of her hair. What I saw, almost ear-to-ear, and it was being pulled down off of her scalp from her head." - Rescuer Raymond Patterson

The full video is transcribed at the bottom of this post. Please read the transcript to fully grasp a "classic" unprovoked pit bull attack. Then ask yourself these two questions. One: How many more would end in death without immediate human intervention, most commonly by law enforcement, trained and equipped to handle the task? Two: Why should any child in any neighborhood ever be exposed to this grave risk of injury? The pit bull problem is already 35-years old and counting.

The below bullet points summarize the components of these brutal, disfiguring pit bull attacks, which occur daily across the United States in urban, suburban, semi-rural and rural areas.

The shock and horror of a sudden, explosive pit bull attack and the damaging injuries that result should be enough to regulate these dogs in every state. Add to this the degree of force needed to stop a pit bull once it has started an attack -- in this case three adult men, a crowbar, pepper spray and two firearms. Combined, these realities should end the "pit bull debate." But, there is more. As in many cases, this pit bull was not finished attacking after its first victim; it pursued more victims.

A "menace" is not a proper term for these dogs, a "hand grenade" is. And there is still more. After an unprovoked attack on a child causing serious injuries, even after the dog escaped its owner's property, police are often the first to say, "No crime done. It was an accident." Criminal prosecution is often difficult because one has to prove a criminal mindset of the dog's owner. Top that off with no civil compensation for the victim's severe injuries and few other conclusions can be drawn.

Do what Aurora, Denver, Omaha, Miami-Dade County and over 700 other U.S. cities have done. Either ban or strictly regulate this dog breed.1

When Patterson states the pit bull owner, "is a good kid," we do not doubt him. When Patterson states, "It's a pit bull. Those things are insanely strong. This thing is big; it's muscular. It has a neck probably the size of my thighs." Now we have a serious problem. He just declared what is self-evident about the pit bull breed and well known by the dog's owner, law enforcement, the courts and the public: These dogs are inherently dangerous. Ownership must be regulated.

In the web exclusive video by KTVA, the two male neighbors give accounts describing the chaos, confusion and their resoluteness during and after the attack. The pit bull attack in Glencaren Court involved multiple guns and their owners too -- yet another interesting aspect. Anchorage police said that one handgun was fired once and shot the pit bull in the head. Tui could be referring to the pepper spraying, not more gunfire. This is not a full raw rolling segment. KTVA made some edits. 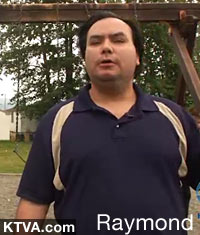 I get home, I live right across the street by where the fire truck is. I hear screaming. I thought it was kids playing outside, until I realized it was screams of pain coming from a little kid. I looked over, and I saw the tire swing moving. I saw somebody hitting towards the tire swing. I thought it was an older kid attacking a girl and then all of a sudden, I realized it was a dog.

When I got over here, the dog had ahold of her hair. What I saw, almost ear-to-ear, and it was being pulled down off of her scalp from her head. So it was serious injury. I think the majority of the blood that is on me is actually the little girl's...

I had barely gotten my door open. I threw everything and I ran over here. I know who owns the dog. The kid and I know each other. He's a good kid. So I come over and I grab onto the dog's collar. It's a pit bull. Those things are insanely strong. This thing is big; it's muscular. It has a neck probably the size of my thighs. I'm holding on, a gentleman from back over here comes in with a crowbar while I've got the dog's collar twisting, and he swings on that dog's head. Smacks him twice really hard. About that time the dog let go.

The little girl went running home. The boy went to help her get inside. Then the dog turned his attention on me. So I am sitting there, twisting with the dog going clockwise. At a certain point, I knew I was going to have to let go.

While the dog is coming at me, I am hitting, hitting ... I'm backing up trying to stay away from the teeth as much as I could. He starts lunging. I kick at the dog and he gets my leg. I'm going to have to go get a tetanus shot and get it all cleaned up...

The dog's loose, starts coming after me, I jump up on the equipment. The dog takes off. At that point, I run across the street, I grab my gun, come back over, and at that point, I was looking over here, there was a bunch of guys, other people who live here. I see somebody else with their gun ready to shoot the dog.

The dog starts lunging, the guy shoots, hits the dog. I think he got him in the abdomen. The dog takes off running and goes over to his yard, so at that point we were all starting to settle down a little bit... 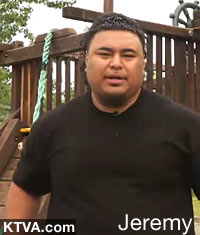 I was out trying to build a little something for my mom. I heard all of this screaming. I thought, "Oh little kids playing. Out of control, doing their thing in the summer." It just kept going on and on and on. Finally, when it was about 5 minutes, I was like, "I'm going to go check this out."

I lean over and I saw the dog, the girl's head inside of the dog's mouth. I was just like, "What?"

I jump over the fence. I immediately ran over here and that's when they pulled the head off of the dog. He let go. They ran after him a couple of times. The guy who had the crowbar, I grabbed it from him. I swung and I hit him. He ran away, I thought that was it. He kept coming and coming and coming after me...

It wasn't going to stop, wasn't going to stop. The guy came back outside, he had a handgun and he sprayed it two times. Once, and right away, he sprayed it again. It didn't lunge at me ... I begged him, "put it down bro, put it down." He was aiming at his head and BOOM. That did not even stop the dog. At the angle I was looking at, it looked like he got his head. I'm like damn, and it was running, "perfectly" that way...

I was very scared, but it was a little girl. I was like, you have to put that to the side and do what you have to do.

Raymond Patterson
I took him, myself, another gentleman that lives here to get this attack stopped.

The Unassuming Heroes Among Us

It "takes a village" to save a child's life from a vicious pit bull mauling, and it also takes a hero. Every year, the Carnegie Hero Fund Commission presents its prestigious medal to those who risk their lives to an extraordinary degree while saving or attempting to save the lives of others. The number of Carnegie Medals awarded to people who risked their life to stop a pit bull attack is overwhelming. The most recent recipient is Charles Jordan who saved the life of Monica Garza.

We salute Raymond Patterson, Jeremy Tui and the unnamed man who struck the pit bull with the crowbar, getting the dog to release. Without your lifesaving, heroic actions this little girl would have suffered even more devastating injuries and possibly even death. The DogsBite.org Community honors you as heroes. As of June 23, 2015 no additional information about the little girl's condition has been released. Anchorage Animal Care and Control took the attacking pit bull into custody.