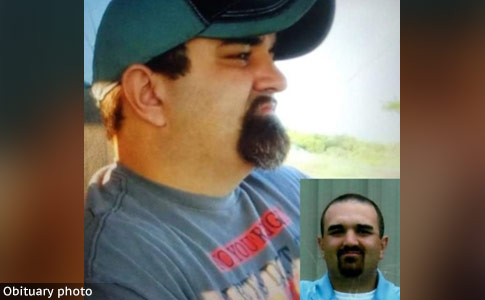 Man Dies After Dog Bites
Wichita, KS - Wichita Police are investigating after a man died after being bitten by a dog while visiting the owner's home in south Wichita. Police identified the victim as 38-year old Cyrus Talkington of Matfield Green, Kansas. The biting incident occurred on April 20 just after 8:00 pm in the 400 block of East 37th Street South. Talkington was bitten by the dog, a canine that was familiar to him, while on the property. Talkington became unresponsive and died at the hospital.

According to police, Talkington was outside talking with his friend and their dogs when one of the dogs attacked Talkington, biting him on the arm and leg, after his friend had gone back inside the home. A few witnesses saw the attack and rushed out to get the dog away from him. Talkington was not conscious or breathing when officers arrived. Investigators believe the cause of death could be a medical condition brought on by the stress from multiple dog bites, reports KSNW.

Talkington was bitten by the dog in two different anatomical regions. The dog did not bite and release once, a far more typical bite behavior.

Peer-reviewed studies show that pit bulls were more than 2.5 times as likely than other breeds to bite in multiple anatomical locations (Golinko, Characteristics of 1616 Consecutive Dog Bite Injuries at a Single Institution, 2017) and 4 times more likely to inflict mauling wounds, ≥3 complex wounds in multiple anatomical regions (Khan, Dog-Bite Injuries to the Craniofacial Region, 2020). Police did not release the severity of injury that Talkington received in the multiple dog bites. 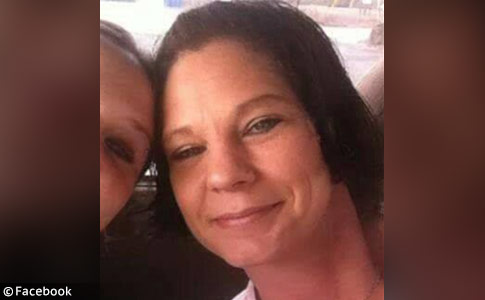 Erin Beach, 45, died after being attacked by her own dog at a home on Apple Orchard Lane.

Woman Killed by Dog
Newberry, SC - A 45-year old woman is dead after being attacked by her own dog, according to the Newberry County Sheriff’s Office. EMS and sheriff's deputies responded to call on Apple Orchard Lane at about 12:53 pm on April 21. Both agencies said the dog showed "very aggressive behavior" toward them -- the dog was dispatched at the scene. Newberry County Coroner Laura Kneece identified the woman as Erin Beach and that the dog involved belonged to the victim.

Investigators do not know what provoked the attack. An autopsy has been scheduled for Beach this week, reports WLTX. A necropsy is also scheduled for the dog to identify what, if anything, caused the attack. Beach's death remains under investigation by the sheriff's and coroner's offices. According to Beach's Facebook page, she owned two dogs up until recently, a Dogo argentino and a pit bull. The Dogo died last September. Beach was "heart broken," at that time.

Beach's death occurred on the same day that 59-year old Maria Perez was found dead in her home after being mauled by two family pit bulls in Mission, Texas, and one day after 38-year old Cyrus Talkington was attacked by a dog and died in Wichita, Kansas. The breed of dog involved in Talkington's death has not been released. Also reported today is a suspected fatal dog attack on the Wind River Indian Reservation on April 10. A dead pit bull was seen at the scene the next day.

A new video released by WLTX states that police had to shoot four bullets into the dog, killing it, because it was so aggressive. Sheriff Lee Foster said that in his 33 years of service, he's never seen anything like this attack. "We've had dog attacks before," Foster said. "But nothing, ah, nothing of this nature." After talking to family and friends, Foster said the dog had no history of being aggressive. Unpredictable, explosive aggression in pit bulls, however, is well-identified. 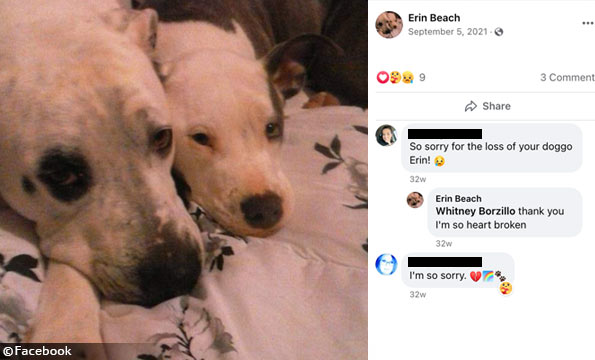 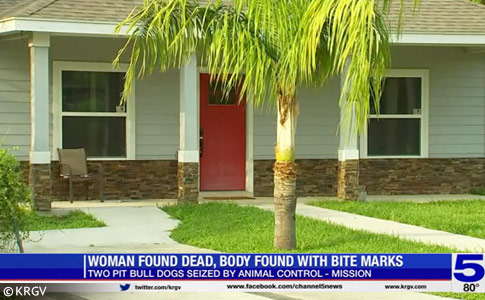 Woman Discovered Dead
Mission, TX - A 59-year old woman was found unresponsive by her 10-year old granddaughter on Thursday around 3:41 pm in the 800 block of Leal Street. When police arrived at the scene, they located the woman covered in blood with "several bite marks on her left side of her body and face," according to Mission police spokesman Investigator Art Flores. Maria Rachel Perez was pronounced dead at 4:18 pm. Two pit bulls that belonged to relatives were taken into custody.

It was the granddaughter that called 911. "A young lady, a juvenile showed up at home to a residence and observed that her grandmother was laying on the floor with blood," Flores said. "We did see some evidence of dog bites on the female’s left side portion, upper portion of the body, left arm," said Flores. "We can’t say it was the dogs at this point." When police arrived, the "two pit bulls were isolated in another room," Flores said. An autopsy has been ordered for Perez's death.

A male neighbor, who did not wish to be identified by KRGV, said the two dogs were known to be aggressive. "These were pretty aggressive dogs. They would escape. They were always roaming in the neighborhood. They'd even break into people's yards," he said. "It could have been a child. I hope this never happens to anybody ever again." The last dog bite fatality DogsBite.org recorded in this county -- Hidalgo County -- was the death of a 5-year old child that occurred in 2008. 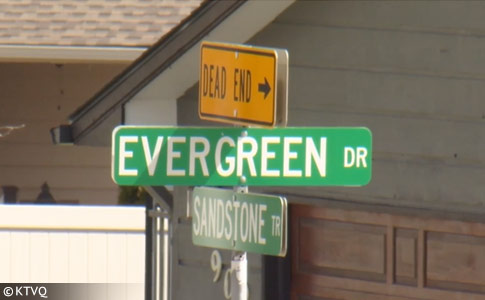 Melitta Hain, 84, died eight days after being mauled by dogs in Billings Heights.

Mauling Victim Identified
Billings, MT - On April 18, news reports emerged about a fatal dog mauling in Billings Heights, a suburban neighborhood in northeast Billings. The attack occurred on April 8 in the 1100 block of Sandstone Trial at about 6:30 pm. Police were initially dispatched to the area on a report of a disturbance. While en route, police learned the disturbance was a dog attack. When officers arrived on scene, they found an elderly woman who had sustained injuries from a dog attack.

On April 19, the Yellowstone County Coroner's Office identified the victim as 84-year old Melitta Hain. She was injured on April 8 and died on April 16 from complications of multiple dog bites. Her death was ruled an accident, the coroner's office said. The attack occurred on private property, and three large mixed-breed dogs were involved, police said. All three dogs are being held in quarantine at the Yellowstone County Animal Shelter. No arrests or charges have been filed.

Audio dispatch logs from Yellowstone County Public Safety on Broadcastify.com indicate the victim lived at a home on Sandstone Trial next-door to the property where the dogs resided. No other information has been released by police. Hain's family has retained the Billings-based law firm Heenan and Cook to represent them, reports KTVQ, an MTN News affiliate. The family and their attorney declined an interview request with MTN News until the police investigation is complete.

Last year, two people were killed by dogs in Montana. In December, 58-year old Duke Little Whirlwind was fatally mauled by a pack of dogs in Lame Deer on the Northern Cheyenne Indian Reservation, about 115 miles southeast of Billings. In May, 4-year old Elliot Sherwin was killed by his grandparents two rottweilers in Whitehall, about 200 miles west of Billings. The grandparents had gained custody of the boy and had recently moved to the area from Washington state.

Prior to the pandemic, only two fatal dog maulings had been recorded in Montana since 2005. In 2006, Dominic Giordano, 4-years old, was killed by one of his uncle's rottweilers in Ulm. The boy and his family had been staying with his aunt and uncle who owned four rottweilers. In 2017, Melissa Barnes, 65-years old, was brutally attacked by two familiar pit bulls belonging to a tenant that lived on her property in Bozeman. She was pronounced brain dead the following day.

Melitta Martha Hain was born in Berlin, Germany prior to World War II. She was injured in the bombing of Berlin and buried in a hospital for two days in Leipzig, according to her obituary. She would have been a young child at that time. She later escaped from East Berlin. Being sponsored out of a refugee camp, she arrived in Great Falls, Montana and felt "safe and free." After marrying her husband in 1983, the couple lived in Denver, Colorado before settling in Billings, Montana.

Baseline reporting requirements:
Law enforcement departments across the United States should release consistent "baseline" information to the media and the public after each fatal dog mauling, including these items.
subscribe | Learn more
Follow
DogsBite