"Attack Dogs" or Dogs with "Protection Training" Prohibited by ADA

The confrontation with the owner of a fake service pit bull occurred in the Walmart food section.

Sallisaw, OK - Several days ago, this stunning video came to our attention. A courageous woman in a motorized cart (also called a "Rascal scooter") films, follows and confronts the owner of a fake service pit bull in a Walmart in Sallisaw, Oklahoma. She calls out the owner multiple times, "That is not a service dog," and "Service dogs stay right by their master" and "Service dogs do not get distracted like that." All the while, the soft whirl of the motorized cart is heard in the background.

She starts out by asking the dog's owner, "Why do you have that dog in here? That's not a service dog." After being rebuffed by the dog's owner, she continues to film and follow the couple, stating, "You are lying, that is a fake service dog." As the couple winds through the aisles, she says, "He can't even walk along side of you because he is not trained well enough for that." After the couple stops, the tension really lights up. The owner states the dog is also, "My personal attack dog."

At this stage, the woman on the mobility scooter has legal grounds to ask Walmart to throw out the fake service pit bull -- the Americans with Disabilities Act (ADA) explicitly does not cover "attack dogs" or dogs with "protection training" (apprehension or bite work). Further, "the Department's modification also clarifies that the crime-deterrent effect of a dog's presence, by itself, does not qualify as work or tasks for purposes of the service animal definition," states the ADA guidance.

The Department recognizes that despite its best efforts to provide clarification, the "minimal protection" language appears to have been misinterpreted. While the Department maintains that protection from danger is one of the key functions that service animals perform for the benefit of persons with disabilities, the Department recognizes that an animal individually trained to provide aggressive protection, such as an attack dog, is not appropriately considered a service animal. Therefore, the Department has decided to modify the "minimal protection" language to read "nonviolent protection," thereby excluding so-called "attack dogs" or dogs with traditional "protection training" as service animals. The Department believes that this modification to the service animal definition will eliminate confusion, without restricting unnecessarily the type of work or tasks that service animals may perform. The Department's modification also clarifies that the crime-deterrent effect of a dog's presence, by itself, does not qualify as work or tasks for purposes of the service animal definition. - Appendix A to Part 36 - Guidance on Revisions to ADA Regulation on Nondiscrimination on the Basis of Disability by Public Accommodations and Commercial Facilities

The senior citizen in the motorized cart has the "attack dog" admission captured on video, as well as the owner saying, "He [the pit bull] attacks people." Enforcement by Walmart, however, is not what happens next. Instead, the owner walks away and returns with an empty shopping cart. Our heroine seated in the Rascal stands her ground and says again, "Look at how he is distracted by everything that comes by. That is not a real service dog! You people need to get it out of the store!"

At 4:15 a Walmart employee steps in and tells our heroine, "It's none of our business," referring to whether or not the dog is a real service animal. "Yes it is," says the woman on the mobility scooter. "If someone gets attacked in here, you're going to get sued up your ass. She said it's her 'attack dog.'" Next, the employee, who lacks knowledge of the ADA guidance, blocks her from filming and states she cannot record people inside Walmart. The employee then asks her to leave the store.

Now, in a complete reversal of the ADA, a Walmart employee is ordering a senior citizen with a disability, who is navigating the store on a motorized cart, to leave the store because she called out a fake service dog. Our heroine then zigzags through the aisles to find her husband, as we hear the whirl of the cart's miniature engine. When she finally reaches her husband, she says, "James, they are going to call the police on me because I was recording one of their customers."

She also states in the video that two senior citizens in wheelchairs were killed by pit bulls in just the past few weeks, perhaps referring to 84-year old Carolyn Varanese and 60-year old Sharon Baldwin. She interestingly cuts back to the store manager in still screens as well because they are wrong. They failed to enforce the Walmart service animal policy and instead only focused on her filming, which corporate states is "prohibited" and reserves the right to enforce that policy.

Yet, the entire time she is recording unlawful conduct and the abuse of the ADA -- and is doing so in her own defense had it come to that.

Toward the end of the video, several long text screens spell out how ADA protections do not apply to attack dogs. She also asks viewers, "Does anyone else think SHE should have been told to leave the store, instead of me?" She states that she and her husband finished their shopping that day -- "the guy didn't hunt me down and we never saw the police." She also asked a police officer later that day if it’s illegal to film at Walmart. The police officer "laughed and said no," she said.

As watchers of YouTube know, the conversation continues in comments, often fiercely and tainted by trolls. YouTuber "Mud People," who recorded the video, defends herself against them and gets admiration from others. Such as, "Just when you think Walmart couldn't suck anymore" and "Good for you, enough is enough … I admire you very much" and our favorite, "Not all hero’s wear capes." We encourage readers to join comments on YouTube in support of Mud People. 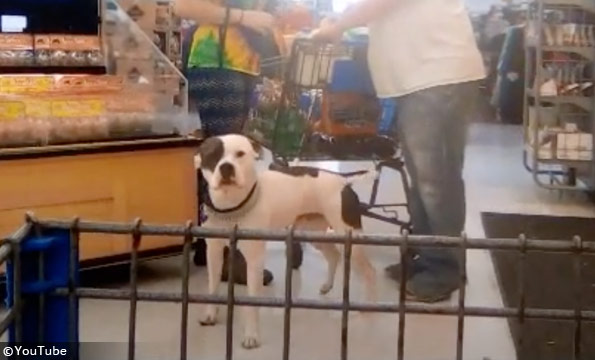 Person with a disability records and confronts the owner of a fake service pit bull in a Walmart.

Related articles:
04/08/20: Traveling by Air with Service Animals - Public Comments from DogsBite.org
02/02/20: DOT Seeks Comments on Pit Bulls and Breed Restrictions in Airplane Cabin
07/05/18: Why Breed Matters in Service Dogs and Why Pit Bull Service Dogs are a Bad Idea

26 thoughts on “Video: Person with a Disability Courageously Films, Follows and Confronts Owner of Fake Service Pit Bull in Walmart”