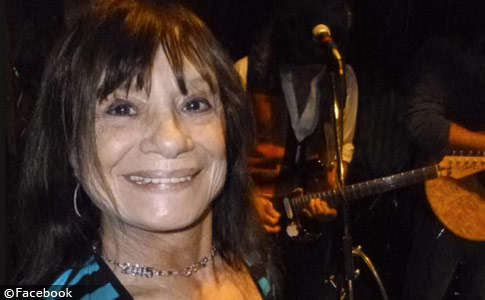 No Criminal Charges
UPDATE 03/29/19: Prosecutors have declined to file charges after a woman was killed by four pit bulls in January. Lana Bergman, 70, died of her injuries at the scene. The pit bulls belonged to a couple that parked their broken down bus on her property two weeks earlier. Bergman had agreed that Stephanie Johnston and Daniel Nelson could stay for a few days, but a few days dragged into weeks. On the day of the fatal attack, Bergman had ordered the couple off of her property.

"Thursday, they are being pulled out, no matter if it is raining or what, they have to leave this premises. Joe told them that today in front of me."

The San Bernardino County District Attorney's Office said there was insufficient evidence to mount a criminal case. Johnston and Nelson lived with their four children on the converted bus, along with their pack of pit bulls. After the mauling, the bus was towed to a local campground. San Bernardino County Children and Family Services went to the site and determined the couple's children were healthy and were allowed to remain with them, according to the sheriff's department.

KESQ reports the couple could have been charged under Penal Code 399. "If any person owning or having custody or control of a mischievous animal, knowing its propensities, willfully suffers it to go at large, or keeps it without ordinary care, and the animal, while so at large, or while not kept with ordinary care, kills any human being," states the statute, is guilty of a felony. However, Supervising District Attorney Ronald Webster said the owners took steps to confine their dogs.

In February, Johnston told KESQ her pit bulls "are not aggressive" and speculated that a "coyote" inflicted the attack or that Bergman "self-harmed herself." Even after her four dogs brutally killed a person, Johnston claimed her pit bulls are "service dogs." Since the attack, the dogs have been in the custody of San Bernardino County Animal Care & Control. Johnston and Nelson want their pit bulls returned to them, thus a hearing will be held to determine the outcome of the four dogs.

02/17/19: Questions Linger
A month after 70-year old Lana Bergman was mauled to death by four pit bulls, serious questions remain unanswered. The dogs belong to Stephanie Johnston and her husband. The couple and their four children live in a converted school bus with the dogs. Two weeks before the deadly mauling, the family parked their bus on Bergman’s property and began living there. Bergman also had a roommate, Joe Fairbanks, who is apparently "best friends" with Johnston’s husband.

Bergman had agreed the couple could stay for a few days, but a few days dragged into weeks. Bergman essentially had to evict them.

Johnston, described in earlier news reports as a "squatter," looks better today than she did six years ago (along with now living in an upgraded bus). During the interview, Johnston shows no empathy for Bergman and no remorse for the attack. She claims her dogs "are not aggressive" after they tore open Bergman’s throat, killing her. Police said all four dogs participated in the lethal attack. Even after brutally attacking a person, Johnston claims her pit bulls are "service dogs."

A voicemail message Bergman left her sister-in-law on the very day she was mauled and killed stated she wanted Johnston and her dogs off of her property right away. "I just wanted to let you know that everything is taken care of. Alan called Joe [Fairbanks] and told him to go get those people off my property NOW ... Thursday, they are being pulled out, no matter if it is raining or what, they have to leave this premises. Joe told them that today in front of me," Bergman said.

Johnston claims in the interview that Bergman never told her to pack up and leave. "What we were getting [from her] was the opposite," she said.

Leading up to the attack, Bergman had called Fairbanks twice, telling him the dogs were loose. While waiting for his arrival, she texted a friend: "Help, their dogs broke out and they woke me up." Bergman was concerned for her own dog, Hunter. "I had to get them away from Hunter and put the doggy door in, they all around my house. They are in my yard, called Joe twice. I am sooo scared," she wrote. When Fairbanks arrived ten minutes later, Bergman was already dead.

Like many pit bull owners after a violent attack, Johnston loads up on far-fetched excuses, such as speculating that a "coyote" was the culprit or that "somebody murdered her." Johnston blames the victim too, maybe "she self-harmed herself in a blackout." Johnston was apparently at a birthday celebration during the attack. The two people who found Bergman -- Fairbanks and Johnston’s husband -- would not go on camera. Johnston also wants her four pit bulls returned to her. 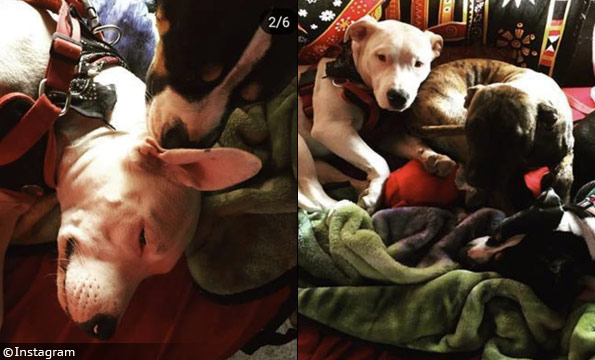 01/19/19: Conflicting Accounts
Over the last two days, storylines took a wild swing. The overstaying guests with four pit bulls -- who were strangers to Bergman -- were not parked on Bergman's property in a trailer. Instead, their colorful bus broke down and Bergman allowed them to "camp out" on her property. "Thursday they are being pulled out no matter if it's raining or what," Bergman said in a recent voicemail. "They have to leave the premises." But on Wednesday night, the pit bulls brutally killed her.

"Dead men tell no tales." The only people who can tell police conflicting accounts are alive, including the owners of the pit bulls, a couple from Oregon with four children who outstayed their welcome; Bergman's roommate, Joe Fairbanks, who discovered her body; Bergman's estranged husband, Alan; and her brother Jay Barnett, a Palmdale resident. Fairbanks was also named in her recent voicemail: "Alan called Joe and told him to get those people off of my property now."

This story has become so "bizarre" that at least one scenario claims Bergman (who is dead and cannot defend herself) "attacked the dogs with a sword." Bergman was a huge dog lover. She owned at least one Labrador at the time of the attack and had previously owned three others. The "bizarre" and the "baroque" frequently plays out when police do not identify the owners of the dog or provide identification photographs of the dogs. How is the community supposed to help?

At the very least, thanks to the media, the broken down bus belonging to the pit bulls' owners was depicted, which may be identifiable to residents.

Though facts continue to be murky, Barnett told The Press-Enterprise the time length involved -- a two day stay by the owners of the pit bulls turned into two weeks. This information is vastly different than the police press release, which stated that Bergman had helped care for the dogs "over the past year." Barnett is calling on residents to "call the Morongo Sheriff Station and demand that the owners of these dogs be held criminally liable for the death of my sweet sister."

Bergman also has two sisters, Ilene Cromer and Harriet Sagalow. One told the Hi-Desert Star the length of stay was only 1.5 weeks. Sagalow said the pit bulls had already attacked Bergman's Labrador and were supposed to be kept separate from Bergman and her dog while staying on her sister's property. "She never had any connection with those dogs," Sagalow said. "Just days before my sister was murdered, I have a recording of her saying that she wanted them gone." 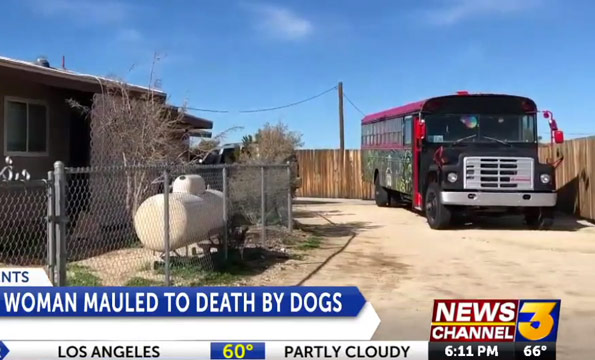 The broken down bus belonging to the owners of the pit bulls seen on Bergman's property.

01/17/19: Pit Bulls Kill Woman
Joshua Tree, CA - A 70-year old woman is dead after being attacked by four pit bulls, the San Bernardino County Sheriff’s Department stated Thursday. The fatal dog mauling occurred Wednesday in the 59000 Block of Sunflower Drive. Deputies from the Morongo Basin Sheriff’s Station responded to the home about 10 pm. Lana Bergman, 70, and her husband live at the residence with a male friend. Bergman allowed her friend to keep his four pit bulls at her home.

Bergman had been helping to care for the dogs over the past year, according to a release issued by the San Bernardino County Sheriff’s Office. At the time of the attack, Bergman was alone with the pit bulls. "She was mauled by all four of the animals," states the release. "She succumbed to her injuries a short time later." Animal control took all four pit bulls into custody. "There is no indication the dogs were neglected, as they appeared well cared for," states the release.

KESQ spoke to Bergman's brother, Jay Barnett, who said that Bergman is estranged from her husband, and had been living on the property alone for years -- until recently. Barnett said that Bergman allowed a couple with four pit bulls to park their trailer on her property for a weekend,1 but they never left, despite her objections. "These dogs were loaded guns," Barnett said. "They ended up killing my sister." He said his sister loved dogs, but was not friendly with these pit bulls.

"It's just a sad, violent way to end your life," Barnett told KESQ. "We are all heart broken. We feel guilty because we wish we could have done more, but she thought she could handle it. And people took advantage of her. Her husband took advantage of her," Barnett said. The version of events told by Bergman's brother differs drastically from the Sheriff's Department's version of events. The owners of the pit bulls, who outstayed their welcome, have not been identified.

On Wednesday, January 16, 2019 at approximately 10:11 p.m., deputies from the Morongo Basin Sheriff’s Station responded to a report of a vicious animal attack at the 59000 block of Sunflower Drive, in Joshua Tree. The victim and her husband live at the residence with an adult male friend. The victim allowed her friend to keep his four pit bull dogs at her home. The dogs were considered family pets, which the victim helped care for over the past year. On Wednesday, while the victim was home alone with the dogs, she was mauled by all four of the animals. She succumbed to her injuries a short time later.

Animal Control Officers responded and took custody of the dogs without incident. There is no indication the dogs were neglected, as they appeared well cared for. The reason for the attack is currently unknown.

The investigation is ongoing. Anyone with information is asked to contact the San Bernardino County Sheriff’s Department, Morongo Basin Station, at (760) 366-4175. Anyone wishing to remain anonymous may contact We-Tip at 800-78-CRIME or www.wetip.com. 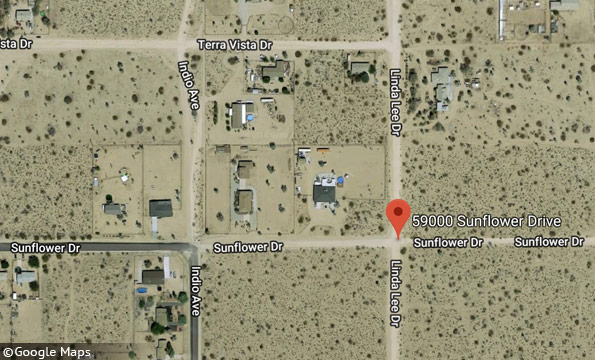 Lana Bergman, 70, was mauled to death by four pit bulls in the 59000 Block of Sunflower Drive.

View the DogsBite.org Google Map: California Fatal Pit Bull Maulings.
1A notable coincidence since Joshua Tree only has a population of 7.4 thousand. A female rescuer with Facebook friends in common with Bergman owns four problematic pit bulls. On November 15, she was desperately trying to rehome them. She had been fostering them for about a year and kept her own animals "in a separate trailer" on her property. All four male pit bulls "do not get along with other dogs or each other," she wrote. She specifically bought a separate trailer to house the pit bulls. Combine "park their trailer on her property for a weekend," which turned into a longer stint, with the fact that this female rescuer specifically bought a trailer to house those pit bulls.