San Francisco, CA - This is the third and final installment in a series of videos about the Department of Animal Care and Control in San Francisco by Black Summers Productions, LLC. This segment is 34 minutes long and focuses on the shameless conflict of interest of Virginia Donohue in serving as the Executive Director of San Francisco Animal Care and Control (SFACC) while co-owning a private, for-profit animal boarding and dog training facility in the city, Pet Camp.

In the second installment, we saw a vicious attack at a dog training facility. The third installment expands upon this attack captured on surveillance video at Dan Perata Training, a competitor to Donohue's Pet Camp. Perata and his wife are interviewed about the incident and how SFACC -- which otherwise refuses to investigate attacks in "private facilities" at Donohue's request -- tries to railroad Dan Perata Training with false testimony at the Vicious and Dangerous Dog hearing.

SFACC requested the Vicious and Dangerous Dog hearing on behalf of "Tank," the attacker in the surveillance video, claiming the dog was the victim of a "fairly aggressive method of training," that he was "on the edge of his coping skills" and was "being assaulted and finally snapped." Sgt. Ellie Sadler of SFACC gave this testimony prior to seeing the video. As Perata states, Sadler "got up there and lied ... flat out made shit up." At that time, Sadler did not know there was a video.

Hearing officer John Denny, who is now retired, presided over the Vicious and Dangerous Dog hearing involving "Tank" in March 2016. Denny is also interviewed in the final installment. One sees Denny noting the unusual situation during the hearing, trying to confirm with SFACC, "Your contention is that Tank was provoked into his reaction that started the bite. Your reason for requesting the hearing then is to clear Tank? Do you see the point I am trying to make?"

After the video is played during the hearing -- Denny recalls his reaction as "his jaw hanging down" -- he asks Sgt. Sadler, "Now that you have seen this video, what are your thoughts?" She replied in part, "My concern -- and I know you don't want to talk about the training stuff -- is that with this kind of training it's not going to resolve. And he's going to keep being forced into feeling terror and reacting to that." Sadler also stated she still believed Tank was provoked to this behavior.

"Animal Control handles cruelty complaints," Denny states during the interview. "Why are we here? Why did you drag everybody involved, the owners of a competitor to Pet Camp, the dog trainer and the dog owner. Everybody's here because you don't like their training facilities?" Denny asks. "It almost seemed like Mrs. Donohue sent her people out -- made an exception for a standing rule [Donohue's refusal to investigate bites at training and grooming facilities] just to harass one of her competitors." - Retired hearing officer John Denny

The third installment then looks at Donohue, who was appointed in 2015 by and answerable only to the unelected City Administrator, Naomi Kelly. At the time of being appointed to lead SFACC, Donohue was the co-owner of Pet Camp (with her husband) and continues to be. Pet Camp has been featured on SFACC's government website, there is a Pet Camp "stipend" and sponsorship arrangement, and Pet Camp "50% off" flyers are placed into SFACC's animal adoption packets.

Ethics complaints came next, but to no avail. Dan Perata Training filed a complaint with his Board of Supervisors and the Ethics Commission. Denny filed a complaint with the Whistleblower Program and Ethics Commission. "If you blow the whistle on somebody who is liked downtown, they can fix it," Denny states in the interview. Denny then made a complaint to the Civil Grand Jury. "Very disappointing," he reflected. "It's just a coin toss," if you get a good grand jury or not.

Denny was forced out of his position as an independent hearing officer for the Vicious and Dangerous dog hearings at the end of 2017.1

The last portion deals with the new SFACC facility, which grew to a price tag of over $100 million dollars. The new facility is a historic building that requires retrofitting and has less kennel space for dogs and cats (84 dogs, 138 cats) than the current SFACC facility (107 dogs, 151 cats). The documentary refers to it's planning as a "game of capital planning musical chairs." When Donohue was hired, the projected cost was $26.5 million. Today, it is four times that amount with interest.

This documentary series began by examining the dereliction of duty at SFACC. Their findings include that SFACC does not keep track of and monitor officially dangerous dogs, SFACC has corrupted the hearing process for dogs accused of being dangerous, SFACC refuses to investigate "bites and attacks" at training and grooming facilities (unless it is owned by a Pet Camp competitor) and SFACC management has no public safety or law enforcement expertise.

The final installment, however, speaks to a much larger breach of trust. By the City continuing to entrust the shelter planning to Donohue, the City has betrayed public trust. Officials are supposed to make decisions based on what is good for the city as a whole -- not personal interests. By city officials ignoring Donohue's conflict of interest and opportunity for constant self-dealing, they have "rejected simple fairness," states the documentary, worsening this breach of public trust. 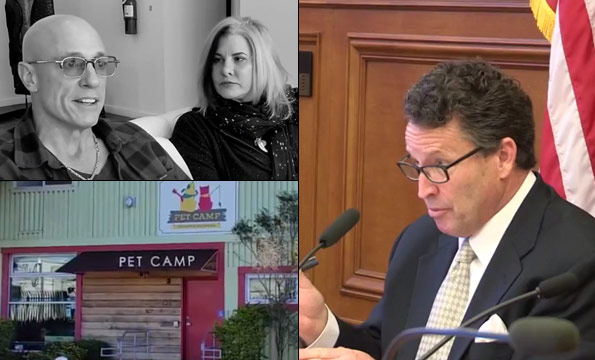 The March 10, 2016 Vicious and Dangerous dog hearing for "Tank" is an hour and 15 minutes long and exists only in audio format. We transcribed a significant portion to highlight the blatant false testimony by Sgt. Ellie Sadler of SFACC, the complainant in the case, in order to harass Dan Perata Training, a competitor to Donohue's Pet Camp training facility. Sadler testifies that Tank was "being abused" and was forced to "respond (attack the trainer) through primal urges."

The obvious problem with Sadler's unfounded testimony is that Tank's attack was captured on surveillance video, which was closely examined during the hearing. After 57 minutes of testimony by the dog's owner, the attack victim, and the owner of Perata Training, Denny asks Sadler again, "Now that you have seen the video, what are your thoughts?" Sadler persists, "the dog was forced into that kind of reaction" and that "with this kind of training it’s not going to resolve."

Denny ignores this absurdity. His role is to determine what to do with Tank, a dog with serious aggression issues that its owner cannot control. Despite Tank's owner stating many times the attack was an "isolated incident," Denny orders Tank to be leashed and muzzled when in public and for the owner to continue her training at Perata Training. In his closing statement, Denny also reminds the owner, "he's got a rap sheet as a biting dog" and "sometimes dogs can't be saved."

"Listen, I’m going to end this not on a sour note. Sometimes dogs can’t be saved. How far are you willing to go? How far are you willing to risk? No one would -- These are decisions that you have to make. But sometimes there is a time that you have to make a real tough decision. All right? And you’ll know it. It doesn’t have to be another bite. But if there’s just no way for you to get Tank under control by yourself then you are going to have to make a decision." - Veteran hearing officer John Denny

Finally, the blacklisting of Dan Perata Training (who uses praise and energy-based training) has been going on for at least three years. In the interview with Dan and Natasha, shot in February 2019, both are still outraged by SFACC's actions. Their complaints to a Board of Supervisors and the Ethics Commission went nowhere. SFACC continues to blacklist them by no longer releasing high-risk dogs to them -- cases that will likely end in euthanasia without specialized training.2 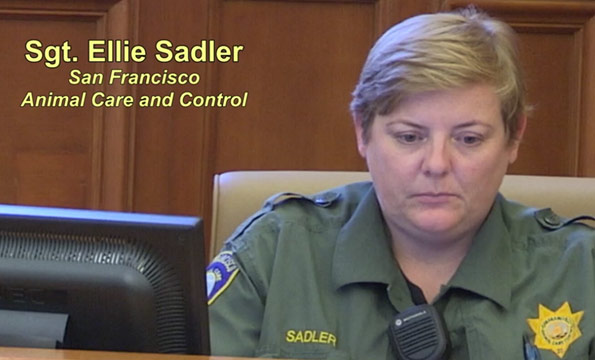 This is the first installment of a series about the dereliction of duty at San Francisco Animal Care and Control by Black Summers Productions, LLC. The segment is just over 7 minutes long and highlights how SFACC fails in their duty to prevent dog attacks by rejecting the enforcement of leash laws. One sees this clearly when SFACC executive officials "abandon the scene" of a stubborn pit bull owner. SFACC also relies on "police" to enforce leash laws in their own lobby.

The second installment focuses on the failure of San Francisco Animal Care and Control to properly manage the risks posed by vicious and dangerous dogs in the city. The segment is 44 minutes long. Findings by the documentary include: SFACC does not keep track of and monitor officially dangerous dogs; SFACC has corrupted the hearing process for dogs accused of being dangerous; and current SFACC management has no public safety or law enforcement expertise.

The final installment focuses on the shameless conflict of interest of Executive Director of San Francisco Animal Care and Control, Virginia Donohue, while co-owning a private, for-profit animal boarding and dog training facility in the city, Pet Camp. The segment is 34 minutes long and zeros in on an attack at Dan Perata Training -- one of Pet Camp's competitors -- and how SFACC tries to railroad the competitor with blatant false testimony at the Vicious and Dangerous Dog hearing. 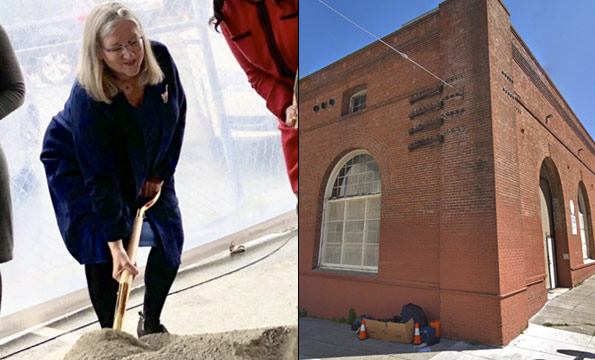 Virginia Donohue seen "breaking the ground" on May 15, 2019 for the new location of SFACC.

1Denny was replaced by Jeff Foster, a "dog lover" and pit bull owner. Foster's stint as a dog court hearing officer did not last long. Foster was eventually removed after making a prejudicial remark to a dog attack victim. This is a MUST WATCH as Stephanie Hung confronts him in the hearing room about a month after his awful remark.
2Perata and Koral explain this during their interview starting at 37:06. Also, they tell a stunning story of an extremely dangerous protection bred dog that SFACC years ago referred to Perata at 42:35 -- that dog could not be saved.