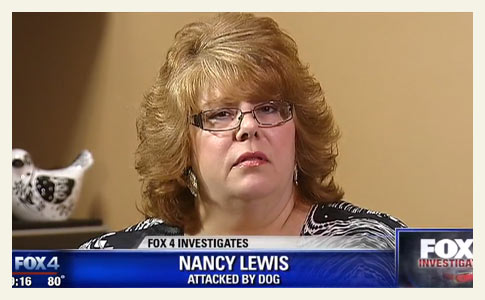 Nancy Lewis was attacked by two dogs in North Dallas in September 2014.

Victim Left in the Dark
Dallas, TX - After 52-year old Antoinette Brown was killed by loose dogs in South Dallas earlier this month, Dallas Animal Services (DAS) and other city officials have come under fire for "communication gaps," a failure to identify patterns of behavior, a failed loose dog enforcement policy and more. Within this crisis, another Dallas dog attack victim has come forward, Nancy Lewis, whose story deepens the failed priorities at DAS and how this affects dog attack victims.

In September 2014, Lewis was attacked by two dogs in North Dallas. There was communication with DAS regarding vaccination information while she was being treated at the hospital, and correspondence about 3-weeks after the attack, when Lewis requested her mysterious bite report. She was never told then of a 2012 incident involving the same dogs that bit off a woman's finger, nor was she told of her right to file a sworn affidavit to initiate a dangerous dog investigation.

Lewis first learns of these vital issues for victims about 19-months after her own attack, which was just a few weeks before Brown was killed. Seemingly out of the blue, a DAS investigator contacted Lewis about a new incident involving the same dogs that attacked her. During that communication, DAS informed her of the 2012 biting incident and that Lewis did have the option to file a sworn affidavit. Finally knowing all of this now, over a year later, Lewis is rethinking her whole scenario.

Lewis has been a hairdresser for 35-years and was dropping off a client at her home when the attack occurred. As soon as she "put the key in the front door, the dogs came out and viciously attacked me," Lewis told KDFW-TV. Her arm injuries required stitches and reconstructive surgery. She also suffered nerve damage. While at the hospital, DAS was in correspondence with her husband about vaccination and impoundment information; one dog had been picked up.

It was also communicated by DAS at that time that not much else could be done, because, "Well, every dog is allowed one bite," Lewis said.

KDFW-TV also spoke to Fort Worth-based animal rights attorney Randy Turner, who represents dog owners in dangerous dog hearings and municipal animal ordinance issues. Even Turner was embarrassed that DAS told Lewis' family that "every dog is allowed one bite" while Lewis was getting stitched up at a hospital. "It really surprised me when you told me what the animal control officer said," Turner told KDFW-TV. "That an animal control officer would actually think that."

Now the same dogs have been involved in four attacks; at least one could have been prevented if DAS had given Lewis accurate information about the 2012 incident and the option to file a sworn affidavit. City officials told KDFW-TV that the reason why the dogs were never seized is because three of the victims did not file sworn affidavits. Turner disagreed. He said that DAS could have initiated the dangerous dog investigation too; an affidavit from a "victim" is not a requirement.

"Any person" can file a sworn affidavit, which includes animal control officers, according to the Texas Municipal Courts Educational Center.1

Last month, a dangerous dog hearing or an administrative procedure was finally held for the dogs. Though a decision has not yet been rendered, reports KDFW-TV. As seen in the footage, the two dogs are still at the owner's home. What is unknown is how this hearing came about. It could not have been initiated by any of the victims, according to the city's own response. This is just one more puzzle piece in the fractured, confusing system for dog bite injury victims like Lewis.

To add another twist with even more confusion, on the related KDFW-TV Facebook post, the "spouse" of Dallas Dangerous Dog Coordinator Carlos Juarez, responded to the news story. Carlos Juarez is the officer that contacted Lewis a few weeks before Brown's death and first told Lewis of the 2012 attack, when one of the dogs bit off a woman's finger. Juarez's wife disputes this news report and apparently has information that the media and Lewis do not have access to.2

Juarez's wife does not stop there. She also chimes in about the mauling death of Antoinette Brown with "breed" information that has not yet been publicly confirmed by any city department to our knowledge and is irrelevant to the failures by DAS after Lewis was attacked in September 2014. Hartsock-Juarez comments, "Oh another news error -- not all of the dogs that attacked Ms. Brown were pit bulls."3 So pit bulls were involved, again, expressing details that are not in the public eye.

The longstanding loose dog problem in South Dallas and failed enforcement policy by DAS is what led us to Lewis' story. DAS did not provide her critical information about a previous bite incident nor was Lewis informed of her right to file an affidavit to initiate a dangerous dog investigation. We do not know how widespread these protocol failures are for dog attack victims in Dallas, but we know in this case, after 20-months, Lewis has still been unable to obtain her bite report from DAS.

All of this, including the public remarks by Juarez's wife, indicates a department riddled with communication problems and other failures. Frankly, it was a fluke that Lewis found out about the 2012 biting incident and later attacks at all. It just so happened that over a year later, Juarez was investigating a recent attack by the same dogs and came across Lewis' contact information somehow. Currently, Lewis is communicating with her city council member about these issues.

Our nonprofit is working with Lewis. We will keep readers updated about any future outcomes. 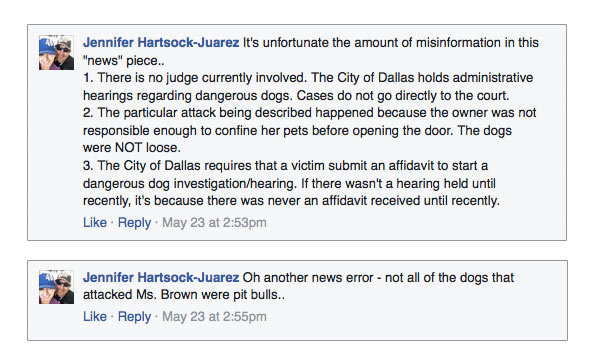 1Animal Hearings in Municipal Courts, by the Texas Municipal Courts Education Center. What we don't know is if Texas cities can limit this, as Dallas has, to "any person of an incident," which limits the filing to victims. See how Houston ("any person") and Lubbock ("any person, animal services officer...") do not make this same limitation.
2If you feel like this has become a "guessing game," due to lack of access to information, you would be right.
3We did find a reference to this in a May 10 story in Google Cache, but like nearly all breaking fatal dog attack media reports, information is updated, as this report was as well, to simply reflect a "pack of dogs." It has been obvious since day one that pit bulls were involved in Brown's death (and to all of our readers and likely most of Dallas too), but the city is also facing the broader and longstanding issue of loose dogs in the southern sector. So "breed" has not been a focal point in the now over 115 pages of news articles we have collected about the attack.