San Francisco, CA - This is the second installment in a series of videos about the Department of Animal Care and Control in San Francisco by Mike Black of Black Summers Productions, LLC. This installment is 44 minutes long and focuses on SFACC’s failure to properly manage the risks posed by vicious and dangerous dogs in the city. It also combines parts of a March presentation by John Denny, a veteran hearing officer for the City's Vicious and Dangerous Dog hearings.

The documentary shows trends that we are seeing in animal control departments across the country. There is a decrease in the number of dangerous dog investigations, an increase in failing to follow up on dogs declared dangerous and an increase in adopting out dogs with bite histories and aggression. The priority of public safety is deficient or absent in many agencies today, despite their role as "law enforcement." The priority instead is to increase the "save rate" at all costs.

From 3:20 to 9:38, one sees dog attack victims testifying during the Vicious and Dangerous Dog hearings. "These hearings do not award any money for damages or cost. That is for an actual court to adjudicate. And while they can offer victims some sense of justice, their real purpose is to protect the public against future attacks from dogs known to be potentially dangerous," the narrator states. Yet, these hearings have since turned into a "kangaroo court," Denny states.

From 10:20 to 24:00, Denny identifies many of the problems at SFACC, including what the death of Diane Whipple taught them. Homicide detectives learned that 66 people had witnessed the two presa canarios acting in a menacing and aggressive manner before her death, but no one had made a report. That's when Denny helped establish the Vicious and Dangerous Dog Unit within the police department, which began collecting all dog bites, attacks and menacing acts for review.

"We are less prepared for a dog attack today than we were before Diane Whipple. Just let that sink in a little..." - John Denny, March 15, 2018

Denny also talks about the underreporting of dog bites and attacks and that when they are reported, they are not being investigated. "There are at least 500 reports sitting in an envelope right next to the dispatcher's office at Animal Care and Control, as we speak, that have never seen the light of day," Denny states. SFACC is collecting bite reports, but is failing to forward them to the Vicious and Dangerous Dog Unit for the vicious and dangerous dog overview process.

From 29:38 to 40:00, the attack of Emma Howell involving a dog named "Hudson" is discussed, which sums up SFACC's willful recklessness regarding dangerous dogs currently. Emma provides testimony in a Vicious and Dangerous Dog hearing where Denny presides. Due to the attack being a "sustained" mauling, the dog was ordered destroyed. We later learn that at that hearing, an SFACC officer, who did not identify herself as one at the hearing, testified in Hudson's defense.

Mike Black provided the top 10 findings of the documentary series so far to DogsBite.org.

As independent filmmakers working on a documentary about the failure of San Francisco to enforce its own dog control laws, these are the ten most shocking facts we have learned about San Francisco Animal Care and Control ("SFACC").

This is the first installment of a multi-part series about the dereliction of duty at San Francisco Animal Care and Control by Black Summers Productions, LLC. The segment is just over 7 minutes long and was released August 5, 2018. The segment highlights how SFACC fails in their duty to prevent attacks by rejecting the enforcement of leash laws. At 3:20, one sees this with stunning precision, when SFACC executive officials "abandon the scene" of a stubborn pit bull owner.

"We are thoroughly convinced of their devotion to the well-being of animals. Their current practices do not show the same devotion to public safety against dog attacks and bites," states the report. "Since the Diane Whipple attack," we fear that San Franciscans have become complacent about the dangers posed by a small percentage of dogs in the city. "It is our purpose to overcome that complacency and to improve public safety, so that such an event will never happen here again."

On March 15, 2018, former police officer and veteran hearing officer for the city's Vicious and Dangerous Dog hearings, John Denny, made a presentation to the Commission outlining problems at Animal Care and Control that compromise public safety in San Francisco. This video is 49 minutes in length and contains the entirety of Denny's presentation. This is a "must watch" for all readers interested in what is happening to animal control departments across the country. 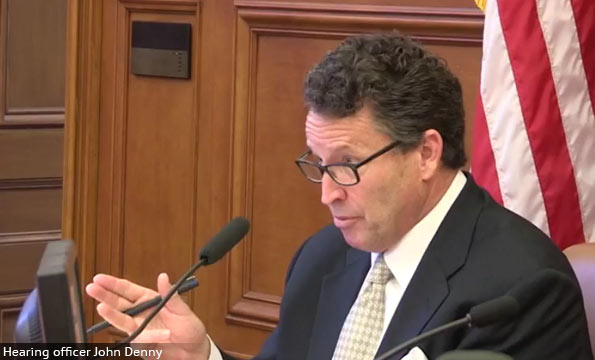