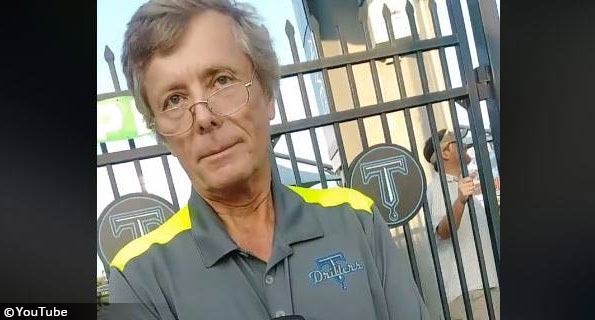 Watch Full Video
DogsBite.org - Our first Photo of the Year for 2018 is a Tulsa Drillers employee who enforced the stadium's no pets policy -- service dogs are welcome. The employee questions a woman at the gated entrance, who claims her small dog provides "emotional support" and is therefore a service animal.1 "She's a service animal, I have her card," Natalia Duran says, as she starts filming the man. However, the employee has a copy of the ADA in his hands, and he does not back down!

"That is not a service dog by the letter of the law," states the employee. "I am not allowing an emotional support dog." - Hero Tulsa Drillers stadium employee

"A service dog," explains the employee, "is trained to do a specific task." Just "being there" is not a task, he said. Outraged, Duran continues on, claiming over one hundred hours of training and that her dog is registered at USSDR, one of the many websites that sell fake service dog kits. The employee then explains to her, while reading the ADA, that a dog that only provides "emotional support" is not a service animal. Duran is argumentative and continues to interrupt the employee.

Duran refuses to answer the employee's basic question, "What specific tasks does your dog perform?" and continues to insist instead, "What she is trained for is emotional support, because I have PTSD." The conversation gets more heated when Duran claims, "You are breaking the law." Our hero Tulsa Drillers employee answers, "No, I am not." Then he continues to stand his ground in front of the entrance gate. Duran is not allowed inside and she is given a refund for her ticket.

Over the last two years, there has been a rising tide of public anger over the number of people abusing loopholes in the ADA, particularly in airplane cabins. After an "emotional support" dog viciously attacked a passenger in the face on board a Delta flight in June 2017, Delta tightened the reins on untrained "support" dogs in the cabin. Six months later, Delta tightened the reins even further, banning pit bull-type dogs as service and support animals due to safety concerns.

As you can see in the video, Duran has the common accessories of a Faker (USSDR card, etc), but when she does not get her way, she becomes belligerent and even threatens to sue the Tulsa Drillers employee. Duran is so used to her Faker accessories and bullying approach working -- silencing any questions about her dog -- that she becomes indignant. While we are sympathetic to her past, which she did not need to share, Duran clearly had no understanding of the ADA.2

It seems the whole reason why Duran began filming the stadium employee, and causing a public scene, was for intimidation purposes.

The Tulsa Drillers employee is patient and professional throughout the confrontation. He asks Duran multiple times the legal question that the ADA allows, but is never sufficiently answered. He also endures a berating by Duran, but her tactics do not work. "That is not a service dog by the letter of the law," he states. This video went viral in late August with many commenters giving accolades to the employee, "My hero ❤️ ❤️," because he was objectively enforcing the ADA.

A situation occurred Sunday night at the Tulsa Drillers game where a person who was accompanied by a dog was denied entrance into the stadium. In the situation, which was recorded by the person, a team staff member followed proper protocol in determining whether the animal should be admitted to the stadium as a service dog. The protocol that was used comes from the American with Disabilities Act (ADA) guidelines for public facilities. Those guidelines provide the ADA definition of what constitutes a service dog. The guidelines are available through the ADA website at:

Frequently asked Questions 1, 2, 3 and 17 provide information that the staff member used in this instance to allow or deny entry.

We encourage members of the media to review the ADA guidelines prior to reporting on this situation. In addition, we have been given the Justice Department Press Office’s Phone Number of 202-514-2004. The Department has offered to field questions at this number from anyone regarding ADA service dogs. 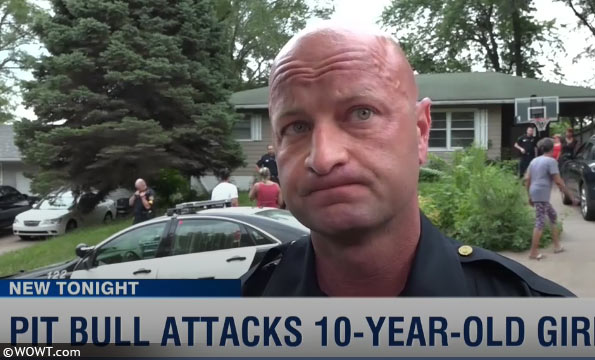 In July, we reported on a family pit bull attack in Omaha (Another Beautiful Face Destroyed by a Family Pit Bull), a city that adopted a pit bull ordinance in 2008. This is the subject of our second Photo of the Year. Police Lt. Jake Ritonya told WOWT News, "In 20-years of law enforcement, I've seen lots of stuff. This one was rather difficult to see her in the hospital. I haven't seen anything quite like that in my career." He then looked away from the reporter and gave this expression.

The 9-year old girl suffered severe facial injuries in the attack. As police carried the girl from the home, the family pit bull continued to try to attack her. "There were three pit bulls running around. It was kind of a crazy, chaotic scene," Lt. Jake Ritonya said. Ritonya was at the scene of the violent attack and the emergency room, where he said that doctors and nurses appeared to be shaken by the extent of the girl's bite injuries, "The looks on their faces said it all," Ritonya said.

The look on Ritonya's face says it all too. Consider the first responders who rescue these mangled children from acute family pit bull violence?

Every year in the 11 year history of DogsBite.org we see law enforcement officers like Lt. Jake Ritonya distressed after a devastating pit bull mauling. They often describe the victim's injuries as the "worst thing" they have ever seen in their career, and hope to never see again. These are professionals who investigate violent crimes like homicides and horrific fatal car accidents. This severe family pit bull attack erupted when the child went to "pick up a knocked over trash can."

Our 2018 Photos of the Year lie in stark contrast to images selected for 2017. This year, we chose two people whose role is enforcement and public safety. They are often not in the spotlight, like the Drillers employee, who enforced the ADA and a veteran police officer, who could not hide his distress after seeing the child's horrific facial injuries. That "in heat" family pit bull was still latched onto the girl's face when firefighters arrived. They had to use a catch pole to separate the dog.

In 2017, our Photos of the Year highlighted young female self-appointed canine "experts," who drew attention to themselves due to their lack of understanding canine behavior. Both cases involved extremely violent fatal pit bull attacks. Instead of the media ignoring these self-appointed "experts," they handed them a bullhorn. Our 2018 photographs celebrate the selfless defenders of laws and public safety, who are often not in the spotlight and do not seek to be either.

1What if the dog had been a pit bull or presa canario? Wouldn't you want this same level of enforcement?
2While writing this post, we noticed the original video Duran posted to her Facebook page, in the hopes of garnering public support, had been removed. ViralHog -- for the purposes of paid licensing -- made a copy. To learn more, you can read the Reddit thread: "She's trained for emotional support, but she's not an emotional support dog!"

Related articles:
11/05/18: Why Breed Matters in Service Dogs and Why Pit Bull Service Dogs are a Bad Idea
01/31/18: Photographs of the Year 2017: Self-Appointed Canine 'Experts' After Vicious Maulings
01/25/18: Delta's Policy Response After a Passenger was Attacked by Emotional Support Dog
07/13/17: The Friendly Skies Fade After a Delta Passenger is Severely Attacked by Emotional...