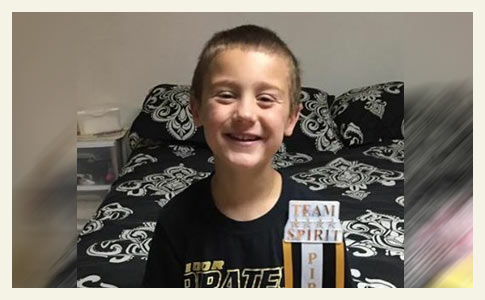 Tanner Smith was attacked and killed by two pit bulls while visiting a home near Vidor.

Family Shares More Details
UPDATE 10/29/15: Funeral services were held for Tanner Jacob Smith on Saturday. Many photographs and comments have been left on his Celebration Wall. Tanner's obituary states that he had only been living in Texas for 9-months. Tanner was a native of Little Rock, Arkansas and was raised in Lincoln, Arkansas before moving to Vidor. The Orange County Sheriff's Office has not released any new information since we learned of the two previous attacks by the dogs.

Tanner's family did provide more information about the attack to Inside Edition. The video and article published on October 21 explains that Tanner and his mother Ashley Phillips were visiting a friend whose father owns the home and the two pit bulls. Tanner's aunt, Melinda Greathouse, told Inside Edition that Tanner had been jumping on a trampoline in the homeowner's fenced-in yard. “When one of the dogs came running in the house and was covered in blood,” she said.

That is when her sister ran outside and found Tanner's body next to the porch, she said. Ashley had believed Tanner was under the supervision of the homeowner while he was playing outside, but he was not there during the attack and no one heard Tanner cry out, Greathouse said. For readers who do not know, victims who are attacked in the face and neck region like Tanner was, cannot cry out. They are instantly silenced as soon as the pit bull executes the killing bite.

“His whole left side of his head had a hole in it. His ear was gone. There was a lot of what looked like road rash on his face.” - Melinda Greathouse

This morning, Tanner's mother left a comment on our Facebook post. "I am tanners mother I was there when it happened he was on the trampoline two feet off the ground the next thing we knew he was gone... They drug him off the trampoline. There wasn't anything we could do," Ashley Phillips stated. She added in another, "Karen is right, he wasn't able to make a sound why because the first bite killed him immediately." One can only imagine the horror of this scene.

No information about the autopsy report has been released. Authorities have not identified the owner of the dogs either, despite two previous attacks and the fatal mauling of a child. It is unknown if criminal charges are possible. At what point will county officials admit that the local ordinance is insufficient, particularly regarding dangerous dog breeds? Simply calling the horrific and preventable death of Tanner, "a terrible tragedy" will not prevent new life-altering attacks.

The family of Tanner Smith has set up a donation account through Wells Fargo Bank. Please send donations to "Donations for Tanner Smith" at account #5817642019 (branch locator).

10/20/15: Previously Attacked Child and Dog
On Monday evening, 12 News published a follow up report. Resident Garrett Bean came forward and shared the story of his 9-year old daughter and her mother, who were both attacked by the same two pit bulls that killed Tanner October 18. The attack happened in February as his daughter, Shealyn Kendall, and her mother walked home from the grocery store. The mother said they were the same two dogs kept at the home on the corner of Aloha Street and Bahama Drive.

"It could have been prevented,” said Garrett Bean about Tanner Smith’s death. “When I found out it was the same dogs, I was furious."

As the two were walking by, both pit bulls and a chihuahua also owned by the homeowner, escaped under the gate and attacked them. Bean showed photos of his daughter's injuries after the attack. Bean also filed a report with the sheriff's office. He was told the dogs would be placed under the standard 10-day rabies quarantine. Then afterward, the dogs were returned to the owner. Bean said he is coming forward with the information now because it has happened again.

Today, 12 News published another follow up. The same pit bulls attacked a woman's puppy last year. The Orange County Sheriff's Office also confirmed the details of Shealyn's attack. Neighbor Jessie Moore told 12 News that the two pit bulls belonging to her next-door neighbor attacked her dog named Rocko in March 2014. She had Rocko chained next to her neighbor's fence when the pit bulls dragged him underneath. The attack left one of Rocko's teeth permanently deformed.

"To me it's not how you're raised. It's the breed. You don't hear cocker spaniels attacking and killing a kid you know." - Jessie Moore

A year and a half later, she is still paying vet bills for Rocko's injuries. "It was like a blood bath out there, just attacking each other," Moore said about the incident. Moore is also upset that sheriff's officials did not give the pit bulls' owners a warning. "They could have done something about these dogs a long time ago," Moore said. Sherifff's officials found neither owner at fault, but told Moore that she had her dog tied too close to the fence (so a free mauling was par for the course?)

The Owners of the Pit Bulls

There is nothing elusive about the owners of these pit bulls. They were very easy to track down on Facebook, along with photos of their dogs. What must be addressed now are earlier reports by family members who said the pit bulls had been around children before, thus severely attacking 5-year old Tanner came as a total shock. The shock factor holds no water now that it is known there were at least two previous documented acts of aggression, one on a person and a pet.

Just days after the March 2014 attack, one of the pit bulls' owners shared with her Facebook friends this particular AP article.1 Bam! This was right after her two pit bulls nearly ripped off Rocko's face. Notably also, the sole person who Liked the AP post had warned the owner in 2012, after the owner got a new chihuahua, that the new dog "was a keeper as long as you keep those pits away from him." Doesn't it make you wonder what happened to the previous chihuahua?

10/19/15: No Charges; Family Mourns
An autopsy is scheduled tomorrow for a 5-year old boy mauled to death by two pit bulls near Vidor, Texas on Sunday. Tomorrow is Tuesday, October 20, 2015 and would have been Tanner Smith's 6th Birthday. This morning his kindergarten classmates spent time making cards for his family. Imagine a teacher trying to tell a classroom of kindergartners that their classmate is never returning. Dear Tanner, heart Blake, read one. His family is overwhelmed and overflowing in grief.

"It is difficult because he is like one of my own … I hurt but I can only imagine the pain that [his mom is] in." - Melinda Greathouse, Tanner's aunt

Family members said that in Tanner's short life, he had already had multiple heart surgeries for a medical condition called hypoplastic left heart syndrome. They also said that Tanner's Scooby-Doo themed birthday party will still take place at a local park. The only difference is that Tanner will be celebrating up in the sky. "We know he's celebrating without us up there," Greathouse said. Family members said that donations can be made to the American Heart Association in Tanner's name.

No Criminal Charges are Expected

The Beaumont Enterprise reported this afternoon that the Orange County Sheriff's Office did not expect any criminal charges to be filed, citing that the two pit bulls were in a fenced yard when the deadly attack occurred. The family said that the dogs' owners were also devastated. An older couple lives at the home, according to Greathouse, and the dogs had been around other children before, including their own grandchildren. So the attack came as a total shock, Greathouse said.2

We remind readers what the founder of DogsBite.org told The Dallas Morning News columnist Steve Blow after a family pit bull attacked and killed a baby boy in Dallas last April, "They're always shocked." The simplest way to avoid these horrific tragedies is for parents to never allow their children to be near these dogs. Tanner Smith is the 141st child mauled to death by pit bulls since the CDC stopped tracking breed data in 1998. Parents, please make this wise choice.

In a scene almost too sickening to imagine, a 2-month-old baby in a bouncy seat was attacked and fatally mutilated by the family’s pit bull.

The baby’s grandmother expressed the family’s complete shock. The dog had been in the family and around other children for eight years without problems, she said.

But it’s no surprise at all for Lynn. In fact, it’s disgustingly familiar.

10/19/15: Pit Bulls Kill Boy in Texas archived
Orange County, TX - A 5-year old boy is dead after being mauled by two pit bulls Sunday evening. The Orange County Sheriff's Department identified the kindergartner as Tanner Smith of Vidor, Texas. At the time of the deadly attack, Tanner was with his mother, Ashley, who was visiting a friend at a home in the 1700 block of Aloha Street near Vidor. Ashley believed he was outside with her friend's husband, but then learned the husband was not home, according to the sheriff's office.

Once she realized the husband was not at the house, his mother went outside and discovered her son gravely injured by the two pit bulls.

Deputies and EMS arrived on scene and began life saving measures on the injured boy. He was transported to a hospital in Beaumont and was later pronounced dead. When the friend's husband learned what happened, he quickly returned home and shot and killed both pit bulls. Tanner would have turned 6-years old on Tuesday. His grandmother, Melissa Phillips, said he was bitten 16 times, including a horrific bite to the main artery of his neck. The investigation is ongoing.

So far in 2015, dogs have killed 26 Americans. Pit bulls are responsible for 81% (21) of these deaths. 35% (9), of all dog bite fatality victims were either visiting or living temporarily with the dog's owner when the attack occurred. Of these deaths, children 7-years and younger accounted for 78% (7), and 89% (8), involved pit bulls. Texas leads all fatal attacks in 2015 with 5 deaths. Arkansas, Florida, North Carolina, Oklahoma and West Virginia follow, each incurring 2 deaths. 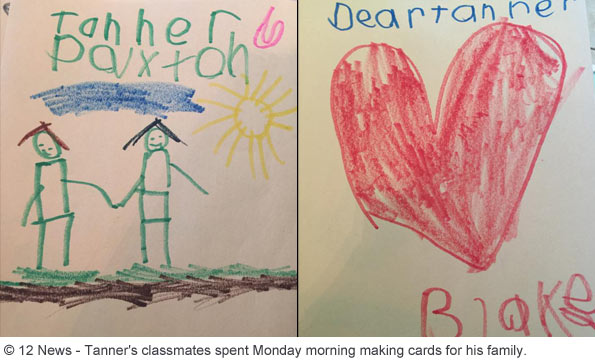