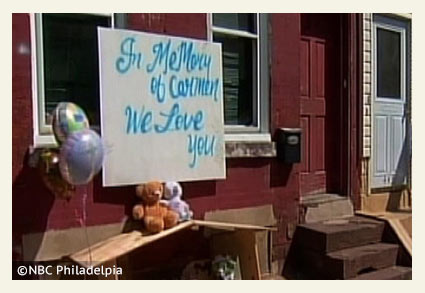 Memorial sign after Carmen Ramos was mauled to death by her husband's pit bulls.

Protocol Breakdown?
UPDATE 09/02/11: A week before the brutal attack that left Carmen Ramos dead, neighbor Dolores Estrella described how the same pit bulls had attacked and bitten her. Estrella was not the only person bitten in the August 19 incident, Gus Castro was as well. The PSCPA allegedly sent the dogs home three days later, which is a rabies protocol violation in many cities. The agency likely should have kept the dogs in quarantine for 10 days after the August 19 bites.1

When the dogs were returned, everybody on the block "was in shock," [Gus] Castro said.

Unfortunately, returning a dangerous, biting pit bull to its owner should not shock anyone, as many state laws allow for multiple bites prior to deeming a dog "dangerous" and long before a court ordered euthanization. What should shock all persons is when a rabies protocol violation occurs -- a disregard or error concerning the 10 day quarantine following a biting incident -- coupled with a person being mauled to death by the same dogs in a very close time span!

Further review of early news reports shows more potential protocol violations by the PSPCA. One neighbor, Victor Viruet, claimed that Jose Alvarez had at least three previous run-ins with the agency. According to his brother Ariel, "He kept paying $200, $300 and they'd give the dogs back." Ariel added that the PSPCA removed 10 dogs from the Alvarez home last year and found dead dogs in his basement. The agency later returned the "living" pit bulls to him.

On September 1, City Managing Director Brian Abernathy launched an internal investigation into animal control -- the PSPCA -- to review if proper procedures were followed. It seems that many procedures were not. At the very least, the discretion of the investigating officers who continued to interact with Alvarez and his pit bulls was sorely lacking. The sufferers include the dead victim and her children, the bitten neighbors and the neighborhood as a whole.

09/01/11: Death Due to Canine Bites
Philadelphia, PA - A Hunting Park woman was mauled to death by her husband's pet pit bulls Tuesday night. Preliminary autopsy results show that 50-year old Carmen Ramos died from multiple canine bites. The manner of death was ruled accidental, according to the report. The victim's husband, 55-year old Jose Alvarez, told police he came home from work to discover his wife being attacked by five pit bulls in their living room in the 400 block of West Carey Street.

According to police, the victim suffered severe trauma to her head, face and legs. Neighbors said the dogs were vicious and that everyone was afraid of them. Neighbors also said the pit bulls were taken away August 19 by the Pennsylvania Society for the Prevention of Cruelty to Animals (PSPCA) after they attacked two residents, but were returned to the residence three days later. The victim's son, Pedro Ramos, now places part of the blame on the animal control agency.

View the DogsBite.org Google State Map: Pennsylvania Fatal Pit Bull Attacks.
1Some states, such as Pennsylvania (See: Pennsylvania Dangerous Dog Statute), allow for "home quarantine," where the owner of a biting dog is allowed to keep the animal secure for 10 days in his home. Cities within these states, however, often create stricter rules that disallow home quarantines. It is unknown what the protocol is for Philadelphia, but clearly, it was unwise to place the dogs back into the Alvarez household.