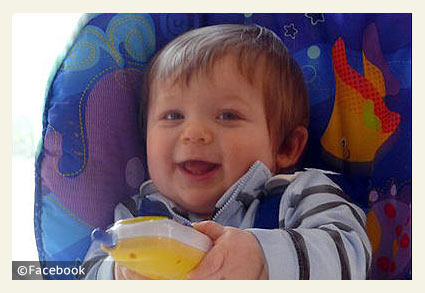 Michael Naglee, 11-months old, was killed by a family dog while visiting his grandparents.

New Information archived
UPDATE 07/06/11: Later this same day, another update was made to The Oregonian article. Just before the incident, the boy was being held by Louisa Farmer, Michael's maternal grandmother, while she sat on the couch. After Michael began squirming, she placed him on the floor. He then "ran across the room to Duncan," according to Michael Farmer. The dog responded by knocking the boy down and attacking him and three adults who intervened.

There are two issues about this update: 1.) An 11-12 month old child does not have the coordination to run as Michael Farmer's statement suggests. While it may have been an unintentional use of the word "run" on his part, instead of a more descriptive term, such as "he quickly staggered toward the animal," running directly toward a dog indicates provocation -- the child asked for it. 2.) The dog wasn't given away at Michael's birth, his parents were the only owners.

The ramifications of the latter are significant. Michael and the dog were not new to one another. The dog attacked and killed the boy in an off-property environment while his parents were absent and he was under the supervision of his grandparents. In the 6-year period from 2005 through 2010, 12% (22) of all fatal dog attacks (182) reflected a similar scenario. In contrast, 14% (25) involved chained dogs, which is commonly known as a high risk factor.

07/06/11: Who Owned the Dog?
KOIN reports in a follow up video that after Michael was born, his parents "gave the dog to his grandparents." The segment does not specify which set of grandparents -- maternal or paternal. Sheriff Anderson states in the video: "The grandparents and the parents and everybody who was there obviously did not believe this dog was of any threat to the child." Except that upon the boy's birth, the parents removed the 135 pound dog from their home?

Separately, Lynne Terry of The Oregonian updated her original story with new details and several statements from Portland-based Jacqui Neilson, a veterinarian and animal behaviorist. Echoing other science ethical sell-outs, Neilson states in the newer article that only 10 fatal dog attacks are reported annually in the United States. The twenty plus more people who are killed by dogs each year apparently never had real lives, families or memorials marking their deaths.

07/05/11: Victim: Michael Naglee archived
Nehalem, OR - On Saturday, another child's life came to an end due to a pit bull-type dog. Press members are now identifying the animal as an American bulldog even though its breed standard, Scott-type, is by definition a pit bull-mix. At the time of the attack, the boy was at the home of his paternal grandparents, Betty and Robert Naglee. When Michael tried to squirm out of Betty's arms, she placed him on the floor. As soon as she did, the dog attacked.

The toddler was rushed to Tillamook County General Hospital, where three of the adults were also treated for injuries. Michael's parents, James and Michelle Naglee, were not in the home at the time of the incident. According to Todd Anderson, Tillamook County Sheriff, the large pit bull-type dog belonged to the boy's parents. The couple got the animal at a shelter about four years ago. The dog, named Duncan, was shot dead on scene by responding deputies.