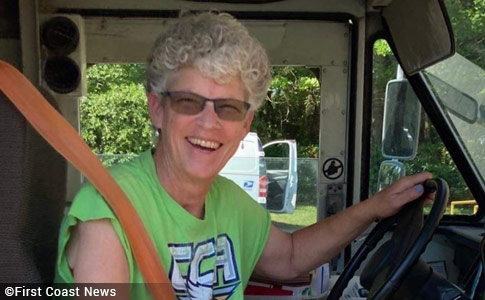 Pam Rock, 61, a rural postal carrier, was killed by a pack of dogs in Interlachen, Florida.

Dogs Escaped Enclosure
UPDATE 08/24/22: On Tuesday, the Putnam County Sheriff's office held a press conference regarding the death of Pamela Rock, 61, a rural postal carrier, who died after being viciously attacked by five dogs while working her route. Deputies found Rock lying in the street with "heavy trauma." They applied multiple torniquets to control the bleeding, Col. Joseph Wells said. The dogs were initially behind a wire fence, but were able to escape underneath it, Wells said.

There was no evidence of a breeding operation at the site. The owner of the dogs is cooperating, Wells said. We are treating this as a criminal investigation, he said. Sheriff's deputies and animal control officers had responded to this area four times in the past three years for animal-related calls, Wells said. At least two of those previous calls were related to the same address. It is not confirmed if those calls involved one or more of the same dogs that attacked Rock, he said.

Several neighbors, including the dogs' owner, rushed to pull the dogs off Rock. "One of the neighbors even brought his firearm along and fired several shots into the air and to the ground in an attempt to disrupt the attack," Wells said. "The investigation is still very active," Wells said. His office is in communication with the state attorney's office. However, in the state of Florida, a felony offense is only possible if one of the attacking dogs had previously been declared dangerous.

The New York Times spoke to a Ms. Campell, who lives near the dogs' owner and saw the ambulance and deputies drive down the dirt road and park beside the house where the five dogs resided. "They’re all aggressive," Campbell said, referring to the dogs. Those dogs "jumped the fence all the time," she said, causing problems in the neighborhood. Tyler Neelon, 24-years old, who lives next door to the dogs' owner, said the dogs once got loose and killed a chihuahua.

"They did not just attack her. They were ripping her apart." - Kaydee Richley

WTLV spoke to Rock's niece, Kaydee Richley, who described some of Rock's injuries. "She had one arm amputated before she passed and they had her other limbs in slings trying to save them," Richley said. "Her heart stopped twice and her blood pressure was all over the place," she said. Devasted, Richely wonders how this happened. "How did it get so far? Why was there just so many dogs just able to get to her? Where were the owners? Why were they not locked up?" 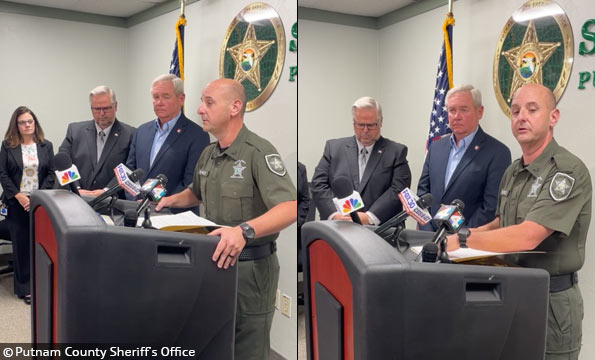 08/23/22: Dogs Kill Rural Postal Carrier
Putnam County, FL - On August 21, a 61-year old postal carrier was attacked by a pack of dogs in the Interlachen Lake Estates area after her vehicle was reported to have broken down, states a media release from the Putnam County Sheriff's Office. Putnam County deputies found the woman on the ground bleeding severely. Five dogs were nearby inside a fence at a residence in the 2000 block of Walker Drive. An unconfirmed social media post states the victim died late Monday.

On Tuesday, the victim was identified as 61-year old Pam Rock. The Putnam County Sheriff's Office also confirmed that she died.

Witnesses told deputies they saw the woman on the ground with five dogs attacking her. Several neighbors rushed to her aid, trying to pull the dogs off the woman. One neighbor shot a rifle into the ground to scare the dogs off. Arriving deputies began first aid, including applying tourniquets until rescue units arrived. The woman was taken to HCA Florida Putnam Hospital by ambulance then airlifted to a trauma center in Gainesville where she remained in critical condition Monday.

WJXT spoke to the man who shot the rifle. He said that helping the woman, "was the right thing to do," and that, "I would want someone to do it for me." She was a sweet lady who left "apples in the mailbox for the horse, and little notes here and there," he said. "She would ask about your kid, how your kid was doing." She was "a really nice lady," he said. Neighbors said the dogs involved were "bulldog-mixes," which in this part of the country means pit bull or American bulldog-mixes.

"Three of the four dogs suspected in the mauling death of a 62-year old doctor have been captured and are being held as evidence by police ... The dogs are reportedly "bulldog-mixes," which is a generic term in much of the south, including Georgia and Florida, that refers to both American bulldogs and fighting bulldogs -- pit bull terriers." - DogsBite.org, death of Dr. Nancy Shaw in Georgia, 2020

Another neighbor interviewed said the dogs have been a problem for a long time. The dogs routinely roamed the rural area, characterized by dirt roads, in a pack without collars or tags. "The dogs have been a nuisance for a long time," said the neighbor who wanted to remain anonymous. "They get into my garbage three or four days a week. When I try to shoo them away, they bark and growl and snarl at me." Animal control seized five dogs identified by witnesses in the attack.

August 22, 2022 - A 61-year-old rural postal carrier was attacked by several dogs yesterday afternoon in the Interlachen Lake Estates area after her vehicle was reported to have broken down. Deputies responded found a woman on the ground with severe bleeding. Five dogs were nearby inside a fence at a residence in the 2000 block of Walker Drive.

Witnesses told deputies they heard a woman scream for help and when they went outside they saw her on the ground with five dogs attacking. Witnesses said several neighbors rushed to help by attempting to pull the dogs off and one neighbor shot a rifle into the ground to scare the animals. Deputies arriving on scene and started first aid assistance including applying tourniquets until rescue units arrived. The woman was transported to HCA Florida Putnam Hospital by ambulance and then flown to a trauma center in Gainesville where she remains in critical condition.

Animal Control arrived at scene and took custody of the five dogs identified by witnesses in the attack.

“Our hearts are with the victim and her family as they navigate through this tragic event,” Sheriff H.D. ‘Gator’ DeLoach said. “It is imperative that dog owners take responsibility in keeping their animals in a secured location for their safety and those around.”

This is an ongoing investigation. There is no further information available at this time. Additional information will be released when it becomes available. - Putnam County Sheriff's Office 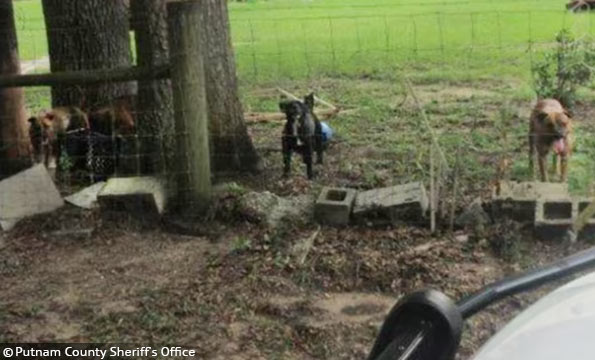 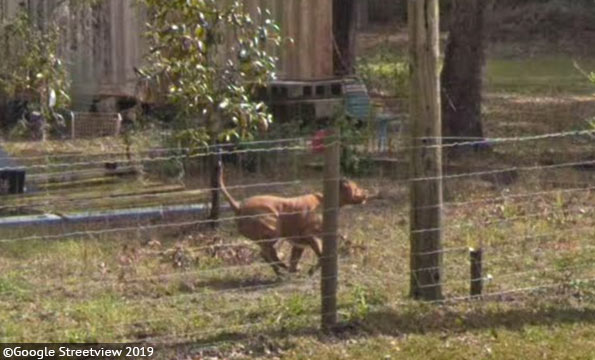 Google Street View captured an image of a dog running in the dog owner's yard in 2019.