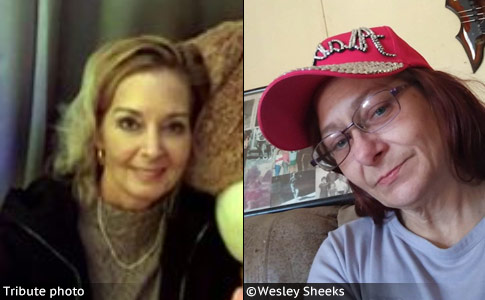 Summer Beard and Michele Sheeks died after being attacked by the same pack of dogs.

First Victim Dies
UPDATE 07/13/22: On April 28, Michele Sheeks was walking down County Highway 11 south of Red Bay. When she got near Crumpton Road, a pack of dogs viciously attacked her. "They took her down and basically drug her probably about ten yards off the road, through a fire patch and barbed wire fence down in the edge of the pasture," her husband Wesley said back in May. She was airlifted to a hospital in Mississippi. Sheeks died while still hospitalized on July 12, 2022.

The morning after Sheeks was attacked, an Alabama public health employee drove to the dog owner's home on Crumpton Road to investigate Sheek's attack. Jacqueline Summer Beard never made it to the dog owner's front door. Beard was attacked and killed by the same dogs after she got out of her vehicle. The owner of the dogs, Brandy Dowdy, 39, was arrested and charged with manslaughter and offenses under the state's dangerous dog law in connection to Beard's death.

The status updates on the fundraiser for Meeks are heartbreaking. She initially underwent multiple surgeries, including skin grafts on both arms, muscle grafts on both legs and "a skin graft to cover the muscle graft on each leg." By May 21, her husband Wesley reported there are "way too many procedures done at this point." By May 29, "both bacterial and fungal infection set up in both legs and said they still can't rule out the possibility of having to do some amputation," Wesley states.

On June 8, Wesley reported, "Michele is now on a ventilator and we don't know for sure what is going on." On July 13, Wesley announced his Facebook page, "I lost the love of my life Michele Dill Sheeks last night around 10:50pm." Doctors said, "her heart just stopped." Wesley told WHNT, "Unfortunately she never got the chance to leave that hospital." Sheeks died at the University of Mississippi Medical Center due to complications from the dog attack injuries late Tuesday night.

On June 16, Sheeks filed a civil lawsuit against Brandy Dowdy and her father Billy Joe Crumpton, who owns the premises where the dogs resided. The Complaint alleges multiple items, including that defendants "carelessly" managed the dogs that defendants "knew or should have known to be dangerous" and "negligently, wantonly, or recklessly failed to take reasonable steps to restrain, confine" the dogs, or take other reasonable actions that would have prevented the attack.

Franklin County Sheriff Shannon Oliver said that charges against Dowdy included a charge under the state's dangerous dog law (Emily's Law) for the attack inflicted on Sheeks. Oliver said that charge will be upgraded to manslaughter due to her death. As of July 10, Dowdy was back behind bars after being arrested for possession of methamphetamine and drug paraphernalia. After this arrest, the State of Alabama filed a motion to revoke her bond in her manslaughter case. 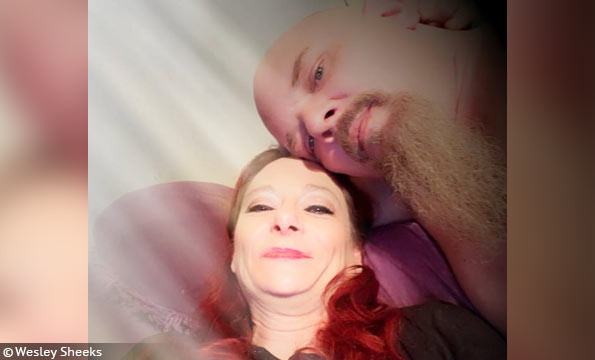 On July 12, Michele Sheeks died of complications from the dog attack injuries in late April.

05/08/22: More Details Released
On April 29, an Alabama public health employee went to a dog owner's home on Crumpton Road at about 10:00 am to investigate a serious dog attack that occurred a day earlier involving at least six dogs. She was mauled and killed by these same vicious dogs, likely just after getting out of her vehicle. Authorities found Jacqueline Summer Beard's body after receiving reports of a suspicious vehicle at the home at 6:00 pm. Beard had been lying dead near her car for up to eight hours.

The owner of the dogs, Brandy Dowdy, 39, was arrested and charged with manslaughter and offenses under the state's dangerous dog law.

Franklin County Sheriff Shannon Oliver stated that a person living at the dog owner's residence is who called in the suspicious vehicle. "Around 6:00 pm we received a call from a person that lives in the house that there was a suspicious vehicle in the yard," Oliver said. "She was on the property of the people where the dogs belonged to," Sheriff Oliver said. "We're not able to confirm if they heard anything, the people at the house, or if they were even there [at the time]," Oliver said.

One day earlier, the same pack of dogs bolted off the Crumpton Road property and attacked a woman walking down nearby Highway 11 South. Michele Sheeks was airlifted to North Mississippi Medical Center in Tupelo for treatment and then transferred to University Medical Center in Jackson, Mississippi. WAAY-TV reports that Sheeks is still hospitalized and will be for some time. Her husband, Wesley Sheeks, said the dogs jumped her all at once then drug her off the road.

"She had no idea they were there until they were on top of her," Wesley said. "They didn't come at her one at a time and just sort of tag team. They all jumped on her at once. They took her down and basically drug her probably about ten yards off the road, through a fire patch and barbed wire fence down in the edge of the pasture," he said. A neighbor first came to her aid that day, Wesley said. If the neighbor had not acted quickly, his wife might not be alive today, Wesley said.

The Red Bay News (who has since placed this article behind a pay wall), reports that Sheriff Oliver said it is believed Beard arrived at the home on Crumpton Road that morning at 10:00 am. "She went there to talk to the owners about putting the dogs up because they didn’t have their shots or signing them over to be euthanized," Sheriff Oliver said. Dowdy, who neighbors described as a "dog advocate" who "owned about 27 dogs," apparently was not home when Summer arrived.

After Sheeks was attacked by the dogs on April 28, Sheriff Oliver told The Red Bay News that when deputies and animal control went to the scene afterward, "the dogs that were there were friendly, and they petted them. There wasn't any problem." No information was provided about why the dogs remained on Dowdy's property after the first attack or what officials communicated to Dowdy, who not only possessed a pack of vicious dogs, but was potentially animal hoarding.

"ADPH investigates animal bites as part of its Environmental Health Program, due to potential risks for human rabies exposure. The safety of ADPH team members is paramount in day to day public health activities. Employees may, as part of their duties, carry out investigations or other visits individually. Employees may request and receive assistance with law enforcement, as needed." - Alabama Department of Public Health

Seven dogs believed to be involved in both attacks were euthanized, Sheriff Oliver said. The breeds of dogs involved have not been released. What is known is that Dowdy owns or has owned a pit bull in the past and that she is a pit bull advocate. In 2015, Dowdy and her then husband David acquired Rowdy, according to his Facebook page. The couple is no longer involved. It's unclear what became of Rowdy, or which partner took that dog after the two called it quits.

Dowdy's most recent public post about pit bulls was published on December 5, 2021, saying that pit bulls "have the biggest hearts and get treated the worst." On October 28, 2018 she posted a pit bull propaganda video by The Dodo -- "Pittie vs. very scary pineapple." On October 1, 2017, she posted a Pit Bull Awareness month meme. On May 19, 2017, Dowdy published a post, "If only people gave them a chance!! They are the most loving babies!! Stop breed discrimination!!" 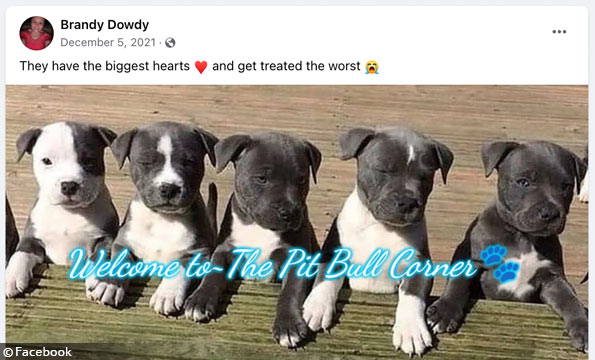 Brandy Dowdy is a longtime pit bull owner and advocate, according to her Facebook posts. 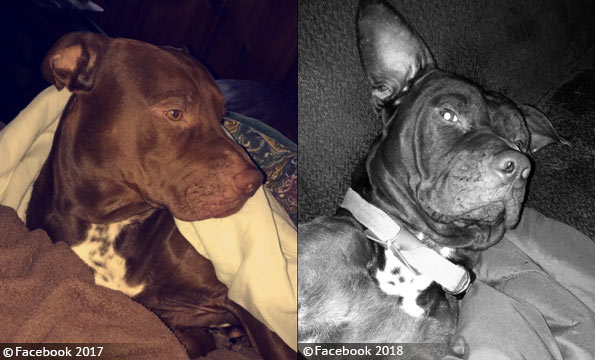 04/30/22: Multiple Victims; One Dead
Franklin County, AL - On Thursday, April 28, 2022, a woman walking along Highway 11 South near Crumpton Road, close to the Mississippi border, was attacked by six dogs that bolted out of a nearby yard. She was transported to the North Mississippi Medical Center in Tupelo then transferred to the University Medical Center in Jackson. The following day, the same dogs killed a state public health employee who had been trying to follow up with the owner of the dogs.

The Franklin County Sheriff's Office is investigating the death of a woman after a pack of dangerous dogs attacked her earlier today. Alabama Department of Public Health employee was following up on the dog attack from earlier this week when she was attacked by the same pack of dogs. The employee, Jacqueline Summer Beard, was located after someone called about a suspicious vehicle on Crumpton Road outside of Red Bay. When deputies arrived, they were met by residents on Crumpton road. Several dogs started attacking the residents when deputies were there, and one person received minor injuries. Some of the dogs had to be euthanized immediately. When the deputies started investigating the suspicious vehicle, they located the body of Jacqueline Beard. Franklin County Coroner Charlie Adcox was summoned and pronounced Beard deceased. Beard was following up on an incident that had been reported to Franklin County Animal Control where a lady was attacked by a pack of dogs earlier this week. It is believed that Beard was attacked as she was attempting to contact the dog’s owner when she was killed by the dogs. Investigators have arrested Brandy Dowdy for Manslaughter and Dangerous Dog law, (Emily’s Law). - Franklin County Sheriff's Office

The investigation into the second victim's attack began after someone called in a suspicious vehicle on Crumpton Road south of Red Bay. Arriving deputies were met by residents. As they were gathered on the roadside, several dogs started attacking the residents. Multiple dogs were dispatched at the scene. When deputies began investigating the suspicious vehicle, they located the body of Jacqueline Summer Beard, 58, an Alabama Department of Public Health employee.

Franklin County Sheriff Shannon Oliver said the first victim, who has yet to be identified, remains hospitalized in Mississippi and was in "pretty serious condition." Seven dogs were involved in the attacks, according to Oliver, some were euthanized at the scene Friday. No dogs were seized by authorities after the first attack. No breed descriptions were released by authorities. Depending upon what investigators learn, Dowdy could be charged under Emily's Law for both victims. 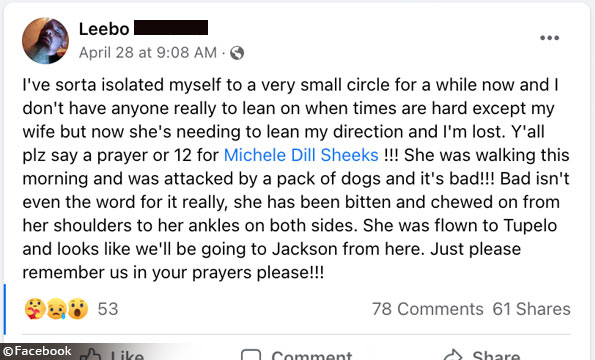 People are saying prayers for the first victim who remains hospitalized with serious injuries. 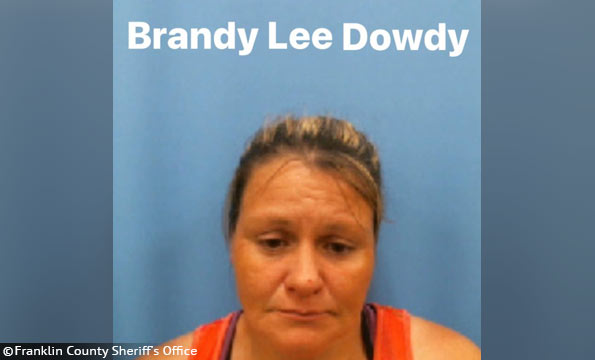 Brandy Lee Dowdy, 39, was charged with manslaughter after her pack of dogs killed a woman.

Since April 10, at least eight people in the U.S. have been killed by dogs. All of these victims were adults, 38-years and older. At least five of the attacks involved multiple dogs and six of the deaths, 75%, involved females 42-years and older. In most of the attacks, 5 of 8, breed data was not released by police because the attacks were unwitnessed and the data was likely unknown, or in the cases of the Kewanee and Wichita male deaths, the breed data was apparently just withheld.

Baseline reporting requirements:
Law enforcement departments across the United States should release consistent "baseline" information to the media and the public after each fatal dog mauling, including these items.
Tweet
Share373
Tweet
Share373
Donate Now