Fatal Dog Attack Statistics
DogsBite.org recorded 46 fatal dog attacks in 2020. Pit bulls contributed to 72% (33) of these deaths, over 16 times higher than any other dog breed. During this pandemic year, media reports of fatal dog maulings fell by 45%. In response, our nonprofit sent out 30 FOIAs to various offices and uncovered 6 unreported deaths in 2020. The last time the CDC collected breed data about dogs involved in fatal human attacks was 1998. Pit bulls have killed over 440 Americans since.

This year's release includes statistics from our 16 year data set. From Jan. 1, 2005 to Dec. 31, 2020, canines killed 568 Americans. Pit bulls contributed to 67% (380) of these deaths. Combined, pit bulls and rottweilers (51) contributed to 76% (431) of attacks resulting in death. When mastiff-type guard dogs and war dogs are added -- the types used to create "baiting" bull breeds and fighting breeds -- this small group of dog breeds accounts for 84% (477) of all dog bite-related deaths. In discussion notes, we examine 2020 trends. Over the summer and fall months we hope to update the combined year study to include the 16 year data set.

DogsBite.org - During 2020, new trends arose, including a rise of reported fatal dog attacks without breed data -- despite many of these dogs being taken into custody -- and a rise of unreported fatal dog attacks. Bull breed attacks surged in 2020, as did multi-victim attacks (a new tracking category) and adult males killed by dogs. Multi-dog attacks involving 2 or more dogs fell in 2020, but fatal pack attacks involving 4 or more dogs increased, despite Covid-19 lockdowns.

A single year of dog bite fatalities may or may not indicate new trends. This is in addition to the Covid-19 pandemic, which forced behavior changes upon many Americans. Given the small number of fatal dog maulings in any single year, it's unknown which parts of our 2020 data, if any, can be seen as a reflection of Covid-19. One would expect to see a rise in family dog attacks and a reduction in off-property attacks -- both aspects did occur in 2020, but without any significance.

Our nonprofit uncovered 6 fully or initially unreported dog bite fatalities that occurred in 2020. For each of these deaths, we also confirmed the breed of dog involved. Along with discovering 6 deaths with breed data, we obtained breed data in 4 other deaths (case count=10). Of media reported deaths, 5 cases had "total" unreleased breed data. Thus, there was a total of 15 deaths, 33% of all deaths, that otherwise would not have breed data had we not followed up with FOIAs.

Given the high number of fatal dog attacks with no breed data in 2020, we analyzed the characteristics of them (case count=9) to see if there were commonalities. There were, primarily, adult females killed in pack attacks. We also examined the characteristics of unreported fatal attacks from 2005 to 2020 (case count=18) that we have uncovered in FOIAs over the last decade. There were commonalities in this data too, including all deaths involving bull breeds.

Characteristics of Reported Fatal Attacks with No Breed Data in 2020

Despite the strange pandemic year of 2020, for over a decade our FOIAs have consistently revealed that pit bull breeds are the most likely to be involved in unreported lethal attacks. These 18 unreported deaths include: pit bulls (involved in 15 deaths), American bulldogs (3) and a bull terrier (1).1 Only two other breeds participated in these attacks, 1 mixed-breed and 1 shepherd-mix. Our data set contains little evidence that fatal attacks by other breeds are going undetected.

In 2020, we officially began tracking multi-victim fatal dog attacks. 15% (7) of fatal dog attacks involved the dog(s) injuring additional people at the scene. In this category, 71% (5 of 7) of attacks involved injuring 2 or more people beyond the person killed; 86% (6) of attacks required these victims to be treated at a hospital; and 100% of these attacks were carried out by pit bulls (7), of which 86% involved a single or pair of family pit bulls attacking household members.

86% (6 of 7) of attacks resulted in multiple adult victims, ≥ 19 years old; and 1 attack involved 2 adults severely injured while protecting a baby.

In 2020, we also began tracking deviant/habitual behaviors, largely using criteria from Barnes and Boat, 2006 (repeated animal control violations, aggressive crimes, drugs, alcohol, domestic violence, crimes involving children and firearms), and when an "argument" preceded a fatal attack. Notably, over half of the multi-victim attacks, 57% (4 of 7), fell into this category. Overall, 20% (9 of 46) of dog bite fatalities in 2020 fell into this new category. All 9 cases involved pit bulls.

Unlike Barnes and Boat, who examined dog owners within one county in Ohio by primarily accessing databases, there are no national databases. These areas are rarely mentioned in news reports either, unless police release details like, "fourth call to this home in the past five years." So, we have to strongly suspect this deviant behavior, as we did in the case of Benjamin Spence, who has a significant rap sheet. It's far from a perfect system, but the data is too important to ignore.

Stunningly, two of those deaths resulted in the rarest of all criminal charges -- second-degree murder charges for using the dog as a dangerous weapon. This type of charge is so rare, we only know of one other case, the death of Angela "Dolly" Kaplan in 1992. Jeffrey Mann was convicted of murder for holding Kaplan down while his pit bull inflicted over 100 bites to her. In 2018, we wrote to the Ohio Parole Board to ensure Mann stayed in prison. His parole was again denied.

In November, Benjamin Spence was charged with second-degree murder after ordering his pit bulls to attack 26-year old Curtis Wickham. Spence was also charged with assault with a deadly weapon after he threw a TV set at Wickham, nearly hitting his head, while Wickham lay dying on the ground from injuries inflicted by Spence's three pit bulls. Court records show that the plea cut off date for Spence is September 9, 2021. A jury trial is scheduled for October 11, 2021.

Attacks inflicted by multiple dogs fell in 2020 to 43% (20), dropping below the 15-year average of 47%. Multi-dog attacks involving 2 or more pit bulls accounted for 70% (14 of 20) of these attacks. Attacks inflicted by single dogs accounted for 57% (26) of all dog bite fatalities. Notably, pack attacks involving 4 or more dogs accounted for 17% of all deaths, which is slightly above the 15-year average of 14.6%. Despite Covid-19 restrictions, fatal pack attacks did not diminish in 2020.2

The chart depicting 16 years of multi-dog fatal attacks shows a steep plunge in 2018. There may be no rhyme or reason. However, given what is now known about unreported fatalities, there could be undetected fatalities during 2018 and 2020 involving a pair of family pit bulls. We did discover one of those cases already, the death of elderly "Coco" in Florida. Those two family pit bulls viciously attacked three adult family members, hospitalizing all three. Coco did not survive. 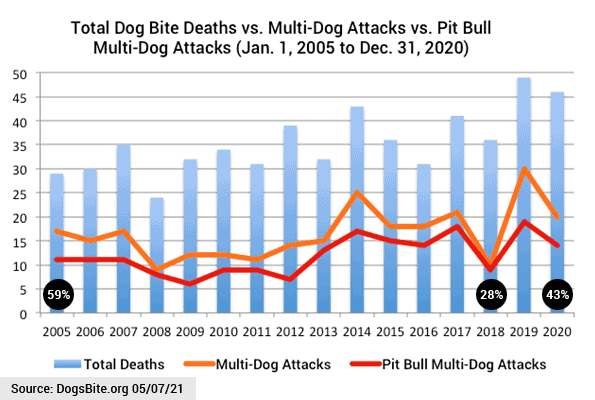 Overall, dog bite fatalities during 2020 were highly dominated by bull breeds and mastiff-type dogs. When breed was known, only 3 deaths tracked did not involve these breeds. Reported fatal dog attacks lacking breed data and unreported fatal dog attacks also characterized the year. Thus far in 2021, the underreporting of fatal dog maulings is also occurring. Reported fatalities are down by 38% this year (Jan 1-May 25, 2021) compared to pre-Covid 2019 (Jan 1-May 25, 2019).

This year, due to the growing number of unreported dog bite fatalities our nonprofit has obtained through FOIAs over the last decade, we were able to identify common characteristics among them. The most likely unreported fatal dog attack from 2005 to 2020 is an adult ≥ 40 years old killed by a single or pair of family pit bulls in a city area in an anti-BSL state, primarily California, Florida, Nevada and Texas in our data set. There was also a slight predominance of male victims.

One can consider these characteristics when reviewing the missing adult cases in the 50-69 age groups we discovered in CDC Wonder database. 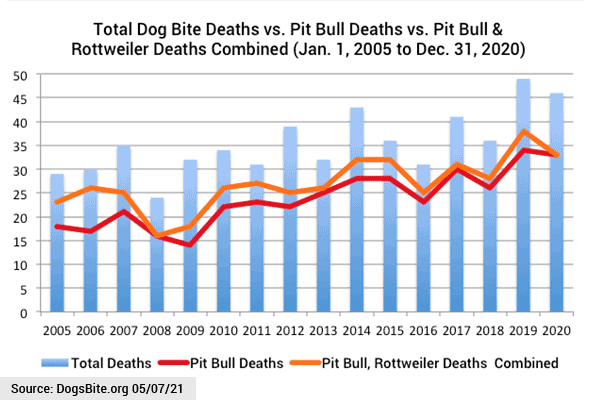 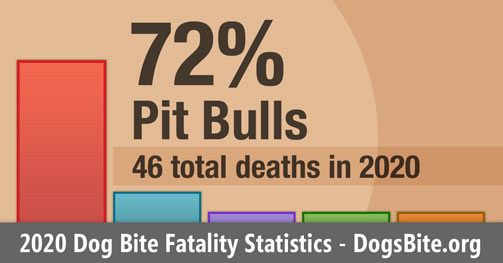 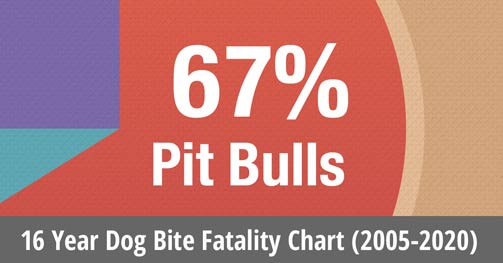