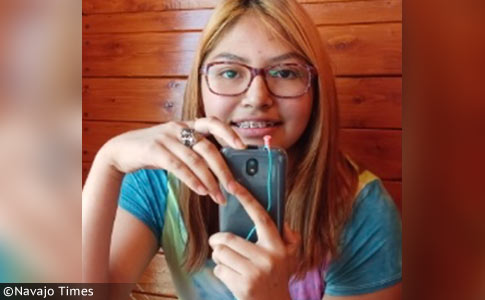 Lyssa Upshaw, 13-years old, was found dead near a pack of vicious dogs in Fort Defiance.

During the last week in May, two separate meetings were held by the Law and Order Committee and the Resources and Development Committee. Items discussed included appropriating emergency funding to bring animal control staffing levels up to five officers per agency, as well as funding for the Navajo veterinary program for increasing the spaying and neutering clinics. Changes to the maximum number of dogs allowed, which is currently four, was also discussed.

WINDOW ROCK, Ariz. — This week, the Law & Order Committee (LOC) and Resources and Development Committee (RDC) of the 24th Navajo Nation Council held separate meetings where reports were given by various Navajo Nation government entities regarding the growing issues of feral dogs in communities.

The reports were requested after a recent incident, where 13-year-old Lyssa Rose Upshaw was fatally attacked by a pack of dogs in the Fort Defiance area. The Council held a moment of silence for her at last Friday’s Special Session to mourn her passing.

“Life is not worth a small fine nor a simple warning,” said Chairman Rickie Nez (T’iistoh Sikaad, Nenahnezad, Upper Fruitland, Tse’ Daa’ Kaan, Newcomb, San Juan). “These laws need to change because it is now a matter of life and death that we cannot afford to ignore.” …

Director of Criminal Investigations, Michael Henderson, said the recent dog attacks are not the first and that the Navajo Nation Police Department has received multiple reports about dog attacks resulting in severe injuries, including three other deaths in the past year.

Henderson recalled a recent case in Tiis Tsoh Sikaad where a 5-year-old was also fatally attacked by a dog. According to Henderson, the dog’s owner was only given a $500 citation for the attack, which he says is a common penalty that does not help the issue.

“[It] doesn’t seem that justice was served at the end,” stated Henderson. “Our department has distributed press releases to bring awareness to the issue and encourages the public to remain vigilant for their safety.”

Henderson acknowledged the current laws surrounding animal attacks do not waiver criminal prosecution due to the inability to determine whether attacks are intentional or not on behalf of dog owners...

05/19/21: Teenager Found Dead
Fort Defiance, AZ - A 13-year old girl was discovered dead on the Navajo Nation near a pack of vicious dogs. Lyssa Rose Upshaw asked her mother if she could go for a walk near the family's home. When her mother, Marissa Jones, got a call from her son saying, "Mom, you need to get over here," she knew something was wrong. Lyssa was discovered curled up in a fetal position. Her clothes and pieces of flesh were scattered around; signs indicative of a fatal pack attack.

"Her legs were all chewed up," her mother recalled. "She was gone."

The dogs were aggressive towards people at the scene, including police. By the time Animal Control arrived, the owners had hidden the dogs, Jones said. Officials eventually found 12 dogs locked in a building on the property. The dogs were seized as evidence. "They had to check them for blood, hair, anything that might be caught in their teeth or on their coat,” Jones said. She believes more dogs may have been involved too, but authorities could not locate them.

Fort Defiance Animal Control officers would not confirm or comment on the case. Her daughter's remains were sent to Flagstaff for an autopsy, Jones said. The dogs were known to be aggressive, according to Jones. "Everybody knows those dogs are mean," she said. Jones also said that NHA housing pet policies are enforced (certain dog breeds are banned from Navajo Nation Employee Housing units), and that more should be done to enforce the animal ordinances on the Nation.

Lyssa's death comes a month after the Associated Press reported that Covid-19 had hindered animal control services on the Navajo Nation, which spans 27,000 square miles. Last year, the pandemic forced Navajo authorities to shut down three of four animal shelters, states the report, in Tuba City and Many Farms, Arizona, and Shiprock, New Mexico. The only open shelter was in Fort Defiance, where this fatal attack occurred. Only two officers worked for the most part of 2020.

Navajo Nation Animal Control manager Kevin Gleason estimated the dog population on the Nation was back up to 250,000 dogs, just like it was 10 years ago. In 2020, his program only picked up about 7,000 dogs, instead of the normal 20,000 to 30,000 dogs annually. Most of those dogs, 80 to 90%, are euthanized. Also, the veterinary mobile spay/neuter unit was not used during the pandemic. The unit provides vaccination and spay/neuter service in rural areas on the Nation.1 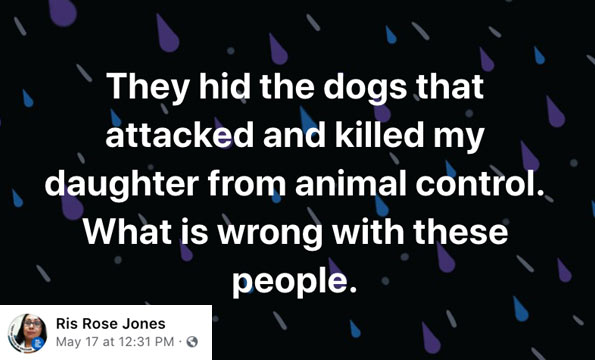 Marissa Jones posted on Facebook about the dog owners hiding the dogs from authorities.

1Sadly, we knew when we read the Associated Press article last month that fatalities might be a result. Indian nations in North America were hit especially hard by the pandemic.
2These numbers only reflect deaths that have been reported by the media.

18 thoughts on “2021 Dog Bite Fatality: Teenager Killed by Pack of Dogs on the Navajo Nation in Fort Defiance, Arizona”