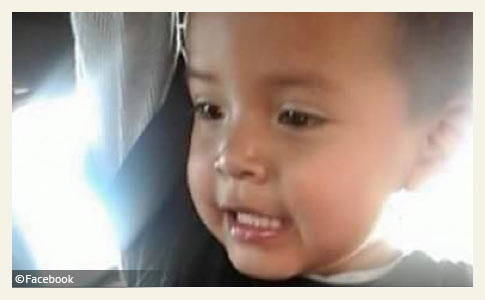 On July 14, Kayden Begay, was killed by a pack of pit bulls in Seba Dalkai.

Navajo Leaders Respond
UPDATE 07/23/16: A week after 3-year old Kayden Begay was killed by a pack of dogs in Seba Dalkai, a report from the Navajo Nation Animal Control Program obtained by the Associated Press confirmed the boy was killed by dogs in the area. The report does not specify the breeds of dogs involved or whether the dogs had owners -- which is standard practice for fatal dog attacks that occur on reservations in our experience. The report also states that only five dogs were involved.

This might indicate that at least six pit bulls or their mixes were removed (vacated) from the scene before Navajo Nation authorities arrived.

Citing the report, Navajo President Russell Begaye said that five dogs mauled the boy before officials arrived. Two dogs were shot on scene and three were taken into custody and euthanized at an animal shelter in Fort Defiance, Arizona, according to the report. All five dogs tested negative for rabies. Cecil Hubbell Sr., president of the Navajo Nation's Wide Ruins Chapter, said people told him they had reported these dogs before, but officials took no actions until the boy was killed.

The Navajo Nation is about 27,000 square miles -- larger than West Virginia -- with very limited resources. The Navajo Nation Animal Control (NNAC) web page states they only have five officers for the entire reservation.1 In a public message plea for more funding, NNAC states they currently lack the ability to provide services in key areas including: aggressive enforcement of laws, livestock damage investigations, animal-bite investigations, quarantines and much more.

07/18/16: Pit Bulls Kill Boy
Window Rock, AZ - A 3-year old boy was killed by a pack of dogs in Seba Dalkai Thursday. The rural community is located on the Navajo Nation Reservation northeast of Flagstaff. The boy's mother, Kimasha Shorty of Gallup, told the Navajo Times that Kayden Colter Begay was visiting her paternal grandparents in Seba Dalkai at the time. Kayden had followed his aunt outside to get the cattle when a pack of 12 pit bulls owned by the family's neighbor attacked and killed him.

The pack of loose pit bulls belonged to neighbor Marlinda Begay, a relative on Kayden's father's side, according to the boy's mother.

Shorty was told his aunt was unaware that Kayden had followed her. “She turned around and saw the dogs gathered around something. She went to see what they were doing, and that’s when she found my son," Shorty told the Navajo Times. The pit bulls attacked Kayden's face, ripping off the left side, and gnawed his thigh to the bone. People in the area had long complained to the Navajo Nation Rangers about the dogs attacking livestock, Shorty said, but nothing was ever done.

After learning about her son's death, Shorty drove to Seba Dalkai from Gallup. By the time she arrived, authorities had destroyed some of the dogs. However, Shorty did not believe they had gotten them all. The Navajo Nation Criminal Investigations Office in Dilkon confirmed that a unit is investigating the boy's mauling death. No charges have been filed so far. Shorty described her son as “the happy kid who ran around shaking everyone’s hand." A fund has been set up for the boy.

Kayden is the third person killed on the Navajo Nation Reservation since 2010. In 2012, Tomas Jay Henio, 8-years old, was mauled to death by up to nine dogs a day after Christmas in Pine Hill. In December 2010, Larry Armstrong, 56-years old, was killed by a pack of dogs near Gallup. Since 2010, there have been at least seven fatal dog attacks on reservations nationwide, including the deaths of Julia Whirlwind, 49, Jayla Rodriguez, 8, Deanne Coando, 40 and baby Justin Lopez.

1In a July 21, 2016 article by the Navajo Times, Wide Ruins Chapter President Cecil Hubbell Sr. said there are only four animal control officers across Navajoland. The article also states the mother's last name is Shorty, not Begay.